Lorna Standingready knows how it feels when a loved one goes missing. Her 14-year-old great-granddaughter disappeared last winter.

“It’s devastating. You’re there and you’re crying (wondering) where is she,” she said.

Eventually she was found safe.

“I was praying from the bottom of my heart,” Standingready said. “Praying that she would be found and she was.”

Standingready is one of dozens who participated in the Regina Police Service’s (RPS) Sisters in Spirit Walk for Healing on Tuesday afternoon.

Sisters in Spirit is a national event held annually on Oct. 4 to honour Missing and Murdered Indigenous Women and Girls (MMIWG).

“Those that are still out there, that’s why I walk,” she said.

“I will walk to let them know kokum won’t forget you.”

“It’s really important to show families that we are there for them to support them,” said Heather Shepard with the RPS Community and Cultural Diversity Unit.

“We are there from the beginning and we walk with you. Whether it’s from patrol, to major crimes involvement or forensic identification, we have a number of members who are involved in cases with MMIWG.” 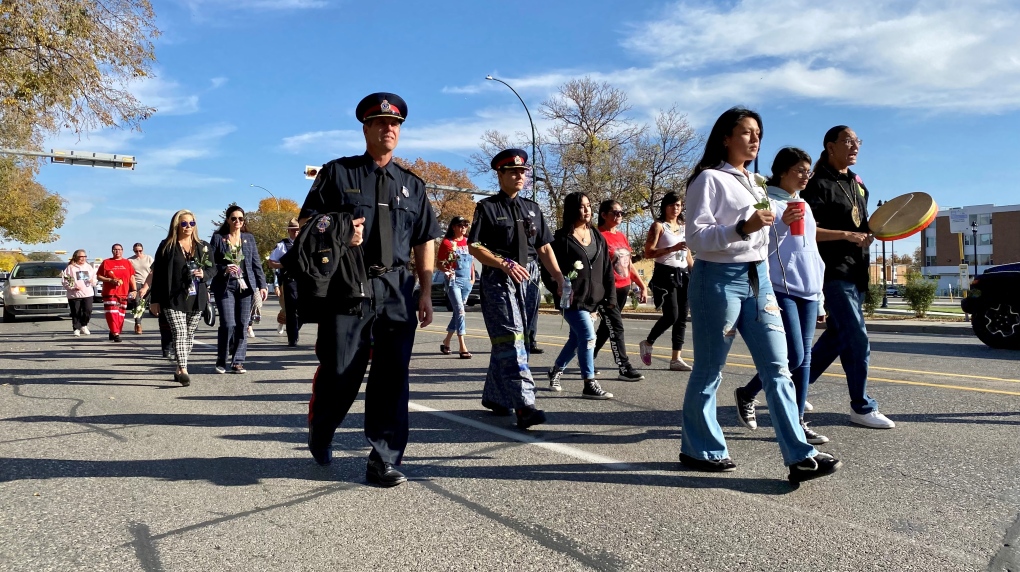 Dozens walked from the Mamaweyatitan Centre to the RCMP Heritage Centre for the annual Sisters in Spirit event. (Allison Bamford/CTV News)

Crystal George was another participant. She was the niece of Pamela George, an Indigenous woman who was murdered in Regina in 1995. George was also the stepmother of Keesha Bitternose, the 29-year-old mother of four who was brutally killed in 2020.

As an Indigenous mother and grandmother, George said many suffer from intergenerational trauma.

“A lot of the non-Indigenous community don’t understand the life that we live and how can we make them understand?” she said. 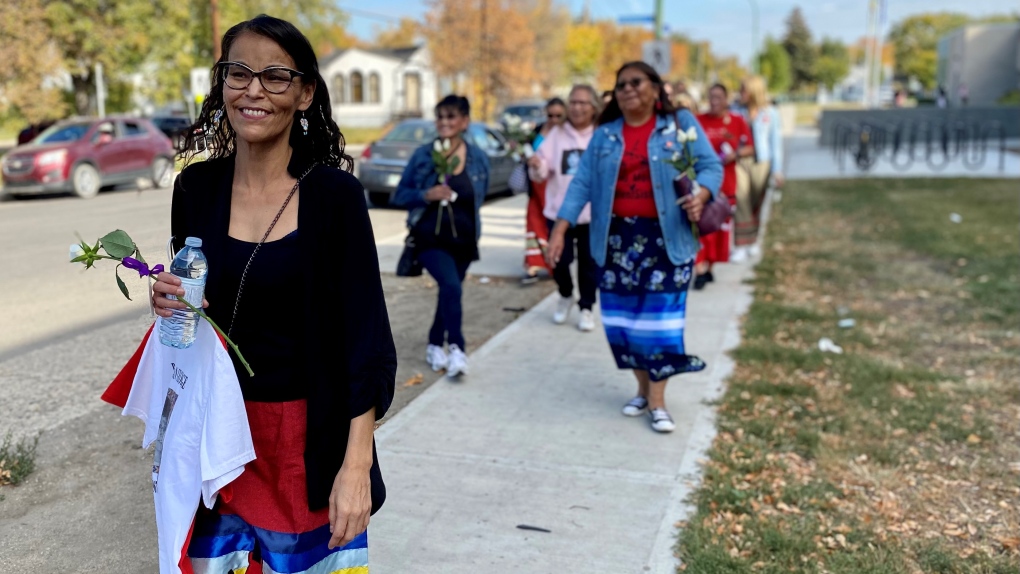 George said there is distrust between many Indigenous people and the police. However, she said she is grateful for events like the Sisters in Spirit walk that help strengthen Indigenous-police relations.

“We have to create those relationships with RPS and the courts. We still need to decolonize in a lot of aspects in the justice system,” she said.

“We need to really put forward in trusting them and forgiving all the people that have wronged us and hurt us.”

Dozens of participants walked 3.4 km from the Mâmawêyatitân Centre to the RCMP Heritage Centre where they laid roses around the Place of Reflection in memory of the missing and murdered Indigenous women and girls.

“It’s important to remember that they are not a number. They are people; they are loved; they are missed and we need to honour them and remember them,” said victim services liaison Rhonda Fiddler.

Forty-six names were attached to the roses, which represented the number of Indigenous women and girls who have been murdered or gone missing in Regina in the last 10 years, Fiddler said.

Forty-one were murdered and five are still missing. Although, Fiddler said there could be more names that have been missed.

RPS have plans to continue the annual walk for at least the next two years.

List of areas the Alberta government accuses Ottawa of overreaching

When the Alberta legislature resumed sitting Tuesday, the first bill introduced by the United Conservative Party government was one aimed at shielding the province from federal laws it deems harmful to its interests.

Prince William's office said 'racism has no place in our society' as he sought to prevent the backlash over his godmother's treatment of a Black advocate for survivors of domestic abuse from overshadowing his trip to the United States.

The Canadian men’s national team returns to the FIFA World Cup pitch on Thursday to face Morocco. Already eliminated, the country is still looking for its first point of the tournament. CTVNews.ca will follow the match live.

As of today Canadians can apply for new dental benefit: here's how

Starting on Thursday, eligible Canadians can apply through the Canada Revenue Agency to receive funding as part of the first ever federal dental-care program, and as of Dec. 12 applications will open for low-income renters looking to access the one-time top-up to the Canada Housing Benefit.

The RCMP said investigators are searching a home in Vaudreuil-Dorion, a suburb west of Montreal, as part of a 'national security' operation. The national police force began its operation Wednesday night. Police at the scene would not say what led them to the house on Aquin Avenue, in Quebec's Monteregie region.

Footage of an upcoming documentary about Harry and Meghan released Thursday shows the couple is once again prepared to tackle their rift with the Royal Family head on and in their own words.

Certain packages of TUMS antacid have been recalled after tablets were found to contain fibreglass fragments, aluminum foil and 'other material,' according to Health Canada.

At first glance, it might seem like the deals have never been better as posters in store windows and online ads trumpet a steady stream of holiday sales. But some consumers say the discounts are more hype than real.

A 101-year-old message has been discovered by workers removing the base of a former statue in front of the Manitoba legislature.