Myles Sanderson may no longer be in Regina: police

Myles Sanderson may no longer be in Regina: police

Regina Police Chief Evan Bray announced that Myles Sanderson may no longer be in Regina during an update to the public Tuesday evening.

"Today we've received information that is leading us to believe he may no longer be in this community," Bray said in the statement posted to Twitter. "As a result, investigations continue and although we don't know his whereabouts we are still looking not only within the City of Regina, but expanded into the province as well."

The development came after a false alarm involving a possible sighting of Myles Sanderson on James Smith Cree Nation.

Earlier Tuesday, RCMP issued an update to its dangerous persons alert which said investigators had received reports of a possible sighting of Sanderson in the community. Residents were instructed to seek shelter or shelter in place.

"Normally we would probably take a little extra time to determine the reliability of that information — but based on the fact that there were multiple calls, and what we're currently dealing with and the carnage that Myles Sanderson has already inflicted on that community, we took the action of issuing another dangerous person alert," RCMP Assistant Commissioner Rhonda Blackmore told CTV News.

Shortly after the directive to seek shelter was issued, a CTV News journalist on scene witnessed what appeared to be a tactical team in the community.

Blackmore said Mounties "cleared" several homes where he was thought to have been sighted. RCMP also conducted aerial and ground searches, Blackmore said. 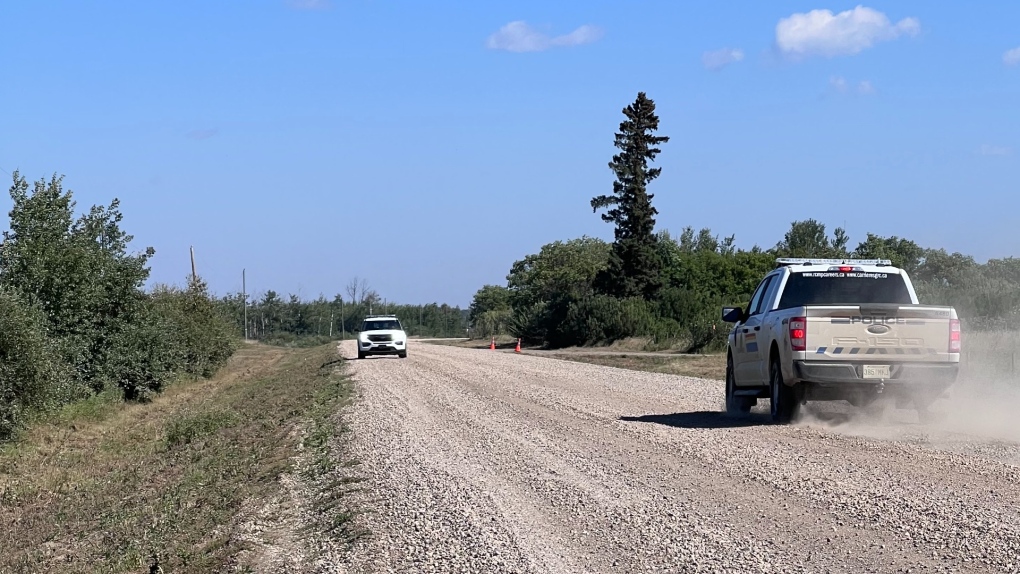 A 77-year-old man was also fatally attacked in the community of Weldon, Sask., roughly 30 kilometres southwest of the First Nation.

Police believe Myles may have been spotted in Regina just before 12 p.m. on Sunday. He is thought to be travelling in a black Nissan Rogue with the Saskatchewan licence plate 119 MPI.

Myles is just over six feet tall, weighing 240 pounds, according to police. RCMP believe he could be injured and may attempt to seek medical attention.

During a news conference on Monday, Blackmore said Myles was known to police.

According to Parole Board of Canada document, Sanderson has a history of violent offences including a 2017 incident where he forced an accomplice to rob a fast-food restaurant by hitting him in the head with a firearm and stomping on him. Sanderson watched the robbery from outside, the document said.

In 2018, while drinking at a home Sanderson stabbed two people with a fork and attacked a man who was walking by, beating him until he lost consciousness.

Weldon resident Doreen Lees, 89, told the Canadian Press she and her daughter were approached Sunday morning by a man who said he was hurt and needed help.

"He had a big jacket over his face. We asked his name and he kind of mumbled his name twice and we still couldn't get it," Lees said.

Lees said the man ran off after her daughter offered to call for help.

In a video posted on Twitter late Monday evening, Regina Police Chief Evan Bray acknowledged the time that has elapsed since the presumed sighting.

"That information that put him in our community is now well over a day old and we have not had any new information to determine that that is no longer factual," Bray said.

"So we're continuing to operate under the assumption that he is here until we get information that indicates otherwise."

Bray took the opportunity to address parents who may be concerned about sending their kids to school with Myles still at large.

"There were very violent incidents that happened [Sunday] in northern Saskatchewan. However, since then, no more violence has occurred," Bray said.

"There has been no repeat of that violence in our community and there's no indication of a threat of violence happening in our city."

However, Bray said Myles should still be considered armed and dangerous.

"We ask our community to continue to be very aware of your surroundings and report anything that's unusual or any information," Bray said.

Earlier in the day, before Damien's death was confirmed, RCMP charged the two men.

Myles faces three counts of first-degree murder, one count of attempted murder and one count of break and enter.

On Tuesday, the Saskatchewan Health Authority (SHA) said out of 17 individuals with injuries related to the stabbing, 10 remain in-hospital.

"Three patients are in critical condition, seven are in stable condition and, since Sunday, seven individuals have been discharged," the SHA statement said.

Sunday morning, the SHA moved into a "code orange" process for accepting a high number of critical patients.

A similar measure was taken in response to the Humboldt Broncos bus crash in 2018 that killed 16 people and injured 13 others.

"Along with continuing to provide medical care required for those affected, the SHA is working on deployment of mental health resources to families, communities, physicians and staff impacted," the SHA said.

Reaction continued to pour in following the tragedy which has made international headlines.

"We stand with Canada, our ally and neighbor and all those affected by this tragedy and condemn this senseless violence," Jean-Pierre said.

The Duke and Duchess of Cambridge also expressed their condolences.

"Catherine and I send our best wishes to the people of Canada."

--This is a developing story. More details to come.

Hurricane Ian left a path of destruction in southwest Florida, trapping people in flooded homes, damaging the roof of a hospital intensive care unit and knocking out power to 2 million people before aiming for the Atlantic Coast.

Canadians in Florida hunkering down as hurricane Ian lashes the state

Canadians in Florida are hunkering down as the massive Category 4 storm lashes the southwest coast with heavy winds and rain.

A fourth leak on the Nord Stream pipelines has been reported off southern Sweden, the Swedish news agency said Thursday.

The body of a famed U.S. extreme skier who went missing this week after falling from the world's eighth-highest mountain was recovered Wednesday and transported to Nepal's capital.

Ukrainian President Volodymyr Zelenskiy said he had called on Canada on Wednesday to lead an unprecedented drive to rid his country of landmines linked to Russia's seven-month-old invasion.