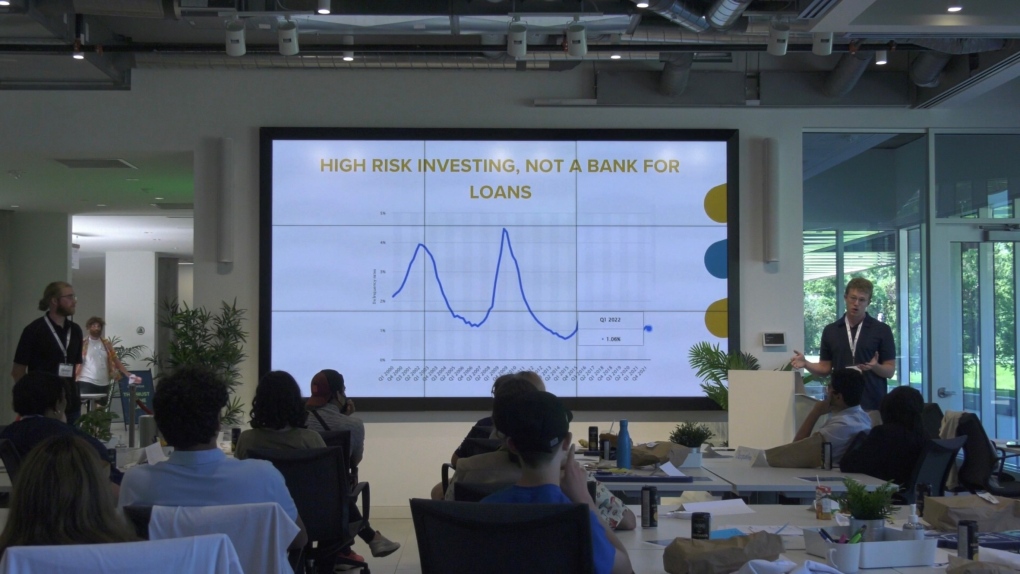 A Regina-based tech start-up boot camp is giving high school students an opportunity to learn what it takes to make it in the business world.

“It’s a really great opportunity for them to be exposed to the tech sector in Regina or the tech community in Regina,” Kyle Lugt, the cultivator coordinator, said.

Big Ideas Camp is an annual program hosted by Conexus Cultivator and Strat Lab Marketing which has been running for the past six years the camp takes place over two action-packed days.

“I went in last year not realy knowing a lot about technology, I knew a bit about business but not about both and when I cam it just opened my eyes to a brand new world here in the city,” said Mercedes Phillips, a camper returning for her second summer with the event.

The program is partnered with various local Saskatchewan businesses that teach students the ins and outs of launching and running tech start-ups. The group has multiple seminars, which include visits to local companies, discussions on smart investments, coding and much more.

Organizers said the event is a significant opportunity to engage the next generation of entrepreneurs.

Nearly all Conservative members of Parliament voted for a bill they say would protect the conscience rights of health professionals when it comes to medical assistance in dying.

North Korea launched two short-range ballistic missiles toward its eastern waters Thursday after the United States redeployed an aircraft carrier near the Korean Peninsula in response to Pyongyang's previous launch of a nuclear-capable missile over Japan.

Ontario woman sexually assaulted by Jacob Hoggard says she is suing him for $2.8M

The Ottawa woman who former Hedley frontman Jacob Hoggard is convicted of sexually assaulting says she is now suing him for $2.8 million.

In the first footage of its kind, scientists captured the moment a pod of orcas hunted great white sharks in South Africa.

Starting Thursday, businesses in Canada will soon be able to pass credit card fees on to their customers, thanks to a multimillion-dollar class-action settlement involving Visa and Mastercard.

A Texas death row inmate whose case redefined the role of spiritual advisers in death chambers nationwide was executed Wednesday, despite the efforts of a district attorney to stop his lethal injection.

The Colorado baker who won a partial Supreme Court victory after refusing on religious grounds to make a gay couple's wedding cake a decade ago is challenging a separate ruling he violated the state's anti-discrimination law by refusing to make a cake celebrating a gender transition.

Eric Weinberg, an executive producer and writer for the hit TV show 'Scrubs' and many others, has been charged with sexually assaulting five women that he lured to photo shoots and there could be many more victims, Los Angeles County prosecutors announced Wednesday.

As the holiday season approaches, food banks across Canada are desperate for donations due to an increasing amount of clients. As inflation hits all Canadians, those who feel the impact most are the vulnerable communities with the highest food insecurity rates.