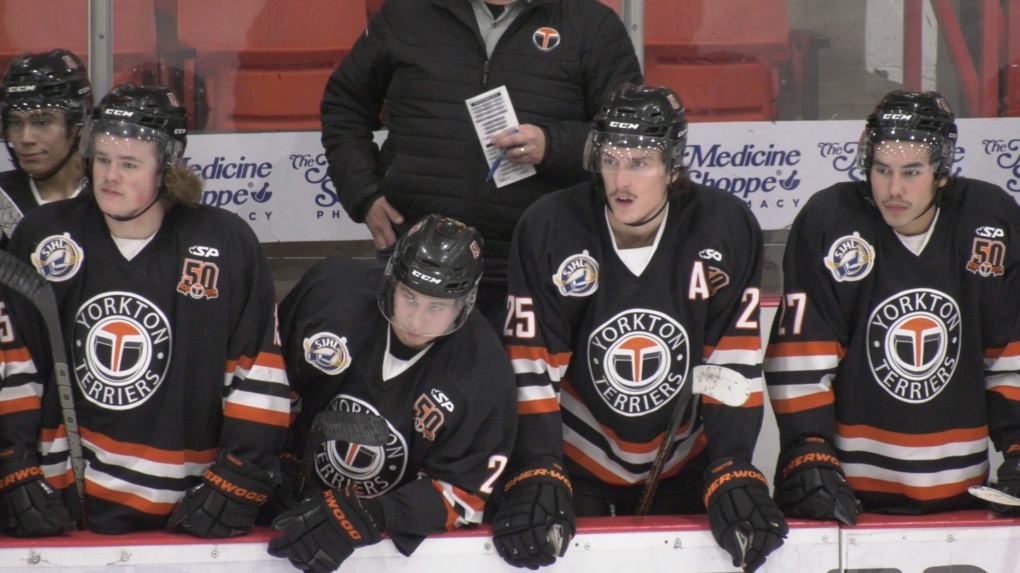 The Yorkton Terriers have gone through an up and down first half of the regular season. (Brady Lang / CTV News)

From being ranked nationally, to a team on the outside of the playoff picture looking in — it’s been an up and down first half of the regular season for the Yorkton Terriers.

The club currently sits second in the Viterra Division in the Saskatchewan Junior Hockey League (SJHL) standings, with a record of 13-20-0-0. Of those 13 wins, nearly a quarter came with a 4-0 start for the club, leaving the team ranked 9th nationally in the Canadian Junior Hockey League’s (CJHL) ranking.

“We had a really good, hot start there,” said Logan Cyca, a forward and the captain of the Terriers in an interview with CTV News on Dec. 12.

“I think we might have got too high on ourselves when we got ranked nationally. Everyone gets knocked down a little bit, it just ended up being a little bit longer than expected. But we have a really good group this year and everyone’s staying positive — and everybody wants to be here.”

Cyca speaking of being knocked down, he’s referring to a major skid for the club in October. The team lost 12 straight games between Oct. 15 and Nov. 22.

The Oct. 15 4-1 loss against La Ronge proved costly for more than just the final tally on the score board. The Terriers also lost overage forward Karsten Krusta, who is still out indefinitely with a lower body injury.

“Totally,” answered Cyca, when asked if that loss impacted the eventual slide in the standings.

“(Krusta) is a huge part of our team … he brings a lot of emotion in the dressing room — even though he’s not really an emotional guy. Just the way he plays, he works his butt off day in and day out. But we’re looking forward to getting him back soon.”

Cyca said Krusta has since started walking, and may make a return before the season ends.

The Terriers dealt with injuries early on in the season, missing key parts of its top six forward group early on, according to head coach and general manager, Mat Hehr.

When asked what he wants to improve on with his club, rolling into 2023, there seemed to be a definite need from the 34-year-old, who is now in his seventh season with the team and fifth full season as the bench boss.

“We’ve had a stretch where we’re playing really good hockey. The first year guys are really getting a grip on how you need to play to win in this league.”

Hehr expects his club to make the playoffs. They’re currently 15 points out of first place in the Viterra Division, with defending league champions Estevan in the top spot.

The Terriers are also tied for the final spot in the playoff picture with Notre Dame.

The Terriers may benefit from a weaker division down the stretch, as Weyburn and Melville occupy the 10th and 11th spots, respectively. Kindersley is in the final spot with 18 points.

“That was our goal at the start of the year, was to win the Viterra Division. It’s definitely still up for grabs. We have to start putting together a couple of winning streaks to climb back in the race but I think we have the group to do it,” Hehr added.

A consistent bright spot for the club in 2022 has been the emergence of rookie Colorado-born goaltender, Caleb Allen. Allen has 12 of the club’s 13 wins to date, and is second in the league in minutes with 1533.

So too has been rookie Dylan Ruptash, who leads the team in both goals (13) and points (22).

The Terriers will open the 2023 schedule with a home date against the rival Melville Millionaires at the Westland Insurance Arena.