NHL rink set to arrive next week for Heritage Classic 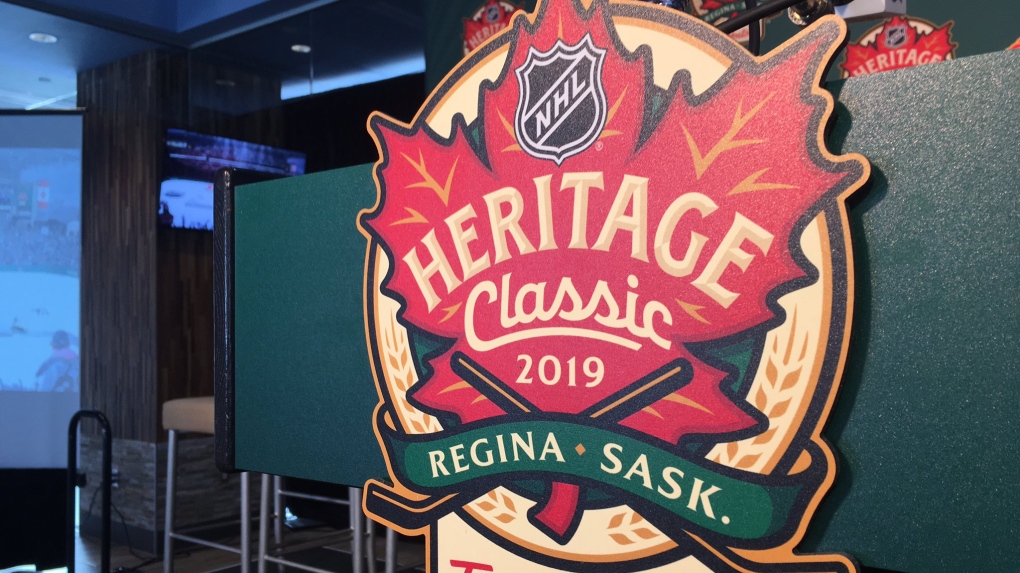 A podium featuring the logo for the 2019 NHL Heritage Classic, set to be played at Mosaic Stadium in October. (Cole Davenport/CTV Regina)

REGINA  -- The 2019 Tim Hortons NHL Heritage Classic is just under three weeks away, but Mosaic Stadium will soon begin its transformation from a CFL football field to an NHL rink.

“It’s a once in a lifetime opportunity to have an outdoor game at Mosaic Stadium and just the investment and energy that goes into the rink,” said Tim Reid, President and CEO of Regina Exhibition Association Limited. “People are going to start seeing that next week when the arena starts to show up and turn the football field into an arena.”

The Calgary Flames will take on the Winnipeg Jets Saturday, Oct. 26. A day later, the Regina Pats will face off against the Calgary Hitmen in the Prairie Classic. Reid says this wouldn’t be possible without the NHL game.

“To put a stadium together like that is not an easy task,” said Pats COO Stacey Cattell. “For the NHL to open the door for us to have that opportunity, our kids are completely excited to play…it’s going to be a great game following the great game on Saturday that the Flames and Jets are going to have.”

“The reality of it is you don’t get to do this without the support of the NHL,” Reid echoed. “Tim Hortons Heritage Classic is going to be unbelievable, but because of that they’ve afforded us the opportunity to keep the arena in another day.”

Reid also said the WHL match will be more affordable for families, with tickets priced at just $18.50. In comparison, standard tickets for the Heritage Classic start at $114.

“The reality of an NHL game is it comes with NHL prices and not affordable for everybody,” he said. “Part of this partnership for us was about making sure that everybody who is a hockey fan or frankly just wants an experience to be part of the Heritage Classic can enjoy.”

“The NHL is going to keep their pre-game festivities outside of Mosaic Stadium up and operating, so we’re excited about that because, again, it makes it a full day of fun and a whole day about Regina Pats hockey,” said Cattell.

“Most importantly I think we want to fill that stadium and show our pride for the Pats,” said Reid. “This is a once in a lifetime opportunity for some young men and for a team and I think we really get a chance to make history hosting an outdoor WHL game.”

This will be the second outdoor match between the two WHL franchises who played at Calgary’s McMahon Stadium in 2011.