Officials say the vaccine is behind decreasing COVID-19 cases in Sask., but some are still wary of the shot

REGINA -- High vaccine uptake is paramount to Saskatchewan’s reopening roadmap, but hesitancy to get the COVID-19 shot remains.

A member of the Saskatchewan Health Authority’s vaccine uptake strategy team says residents shouldn’t be afraid to talk to someone if they’re unsure about getting the vaccine.

"Sometimes we get a skewed view of what vaccine hesitancy might be based on social media… they’re not part of any conspiracy theory, they’re not even necessarily entirely against the vaccine, they just want more information," Dr. Madhav Sarda, a child and adolescent psychiatrist and member of the SHA’s vaccine uptake strategy team, said.

Dr. Sarda said a person may be waiting to get their shot for a variety of reasons, ranging from specific health issues to cultural norms.

"As a child psychiatrist I’ve had people ask me, 'I’m on my ADHD medication, can I still take this vaccine?’ Yes, yes absolutely, but they just want to be sure, they want to make sure they’re making a good decision for their own health," he said.

According to a poll from the Angus Reid Institute, 24 per cent of Saskatchewan residents remain unconvinced about the COVID-19 vaccine, which is the highest rate in Canada.

That’s down slightly from 26 per cent in January’s poll. However, other provinces have dropped below 20 per cent, including Alberta, which led the country at 45 per cent during that initial poll.

The SHA’s deputy chief medical officer for the COVID-19 pandemic Dr. John From feels there’s less hesitancy in the province than those numbers suggest.

He said talking about it is helping.

"Open communication and conversation regarding this is key to understanding why it’s important for us as a people," he said.

"The uptake has been very good, we’re in a position where there’s a lot of demand for it and we want that to continue."

Vaccine uptake in people over 60 has been strong for the past two months, sitting well over 80 per cent, and it is slowly increasing in the 40s and 50s as more opportunities to get the shot are available.

Residents in their 20s and 30s have seen a sharp increase in uptake since becoming eligible over the past two weeks. 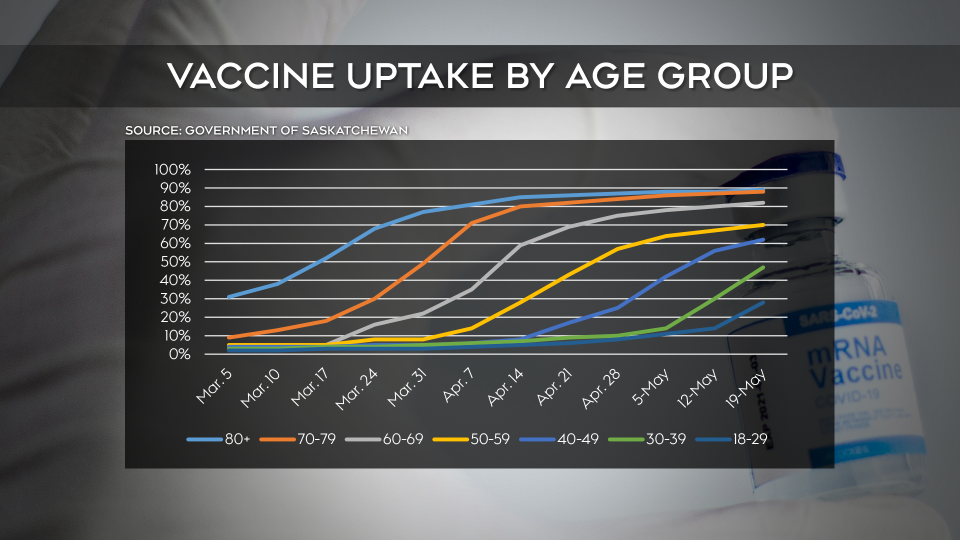 Dr. Sarda said the vaccine is just like when a new iPhone is released – there’s early adopters and people willing to wait.

"What we’re seeing more is you have your most excited people rushing to the front of the line every time the age eligibility drops," he said. "In anything you’ll have your early adopters, your middle adopters and your late adopters, who are like, 'I’ll get it, but I just want to make sure everyone else gets it first and then I’ll be there.'"

The SHA has provided information to healthcare providers across the province about the vaccine and encourages anyone that has questions to reach out.

"Ask your physician, ask your pharmacist, ask healthcare workers in your community to help guide you because this is a team effort and our goal is to help everyone get the vaccine," Dr. Sarda said.

Both physicians say the best way to encourage someone on the fence about the vaccine is to get the shot yourself. They expect hesitancy to drop as more people safely receive the vaccine.