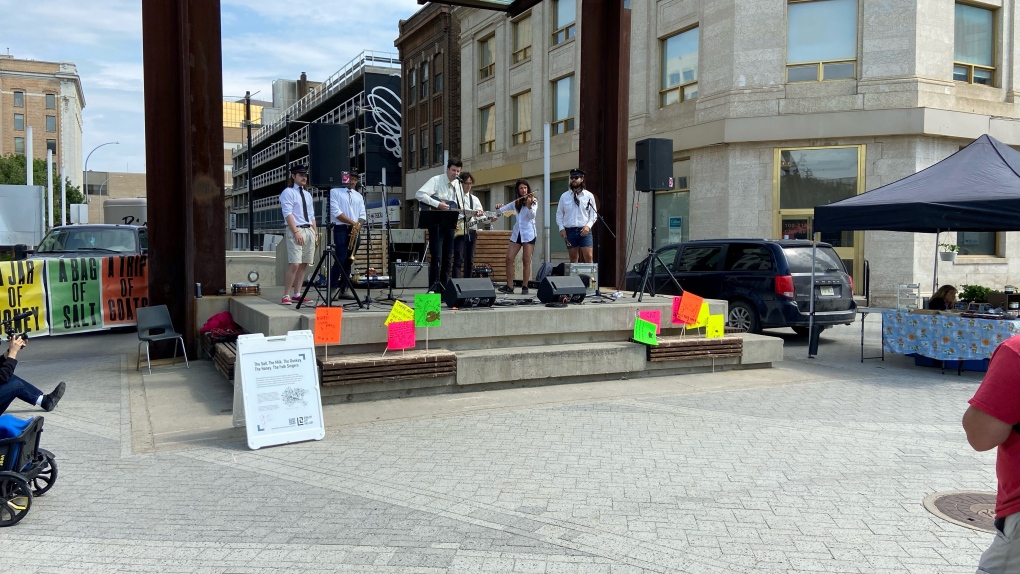 The Regina Farmers’ Market had an atmosphere like no other Saturday morning with folk music blaring from the main stage.

The music was part of an artistic performance by local artist Bill Burns, titled ‘The Salt, the Milk, the Donkey, the Honey, the Folk Singers.’

The performance considered humans relationship to animals and is part of the ongoing series about global trade and food production.

“It's a burden to think of animals and nature and I think of the farm animal as a kind of something between species for us to learn about animals,” said Burns.

In addition to the music, the performance consisted of a parade around Victoria Park with goats, a donkey and a local beekeeper.

The combination of products were then mixed together, including milking a goat and creating some fresh homey from a local beehive, before parading around the park one last time.

The performance was curated by the Dunlop Art Gallery and organizers said there are many benefits to having the performance outside of the gallery.

“It really makes sense to do it in a context like this with the Farmers’ Market and understanding our relationship to food and food production in this context,” said Tomas Jonsson, one of the Dunlop Art Gallery curators.

Beekeeper and artist Jeff Meldrum was also part of the performance. He agreed with Jonsson and said having the art outside can be less intimidating for everyone involved.

“Before I became an artist, I was intimidated by the gallery setting and so this is just a more accessible way to bring arts out to the community,” said Meldrum.

Meldrum supplied the final product in the performance, which was honey. He said bees and humans have a unique relationship.

“I kind of see beekeeping as sort of symbiotic relationship where both the bees and the humans are benefiting,” said Meldrum.

Meldrum added the honey symbolizes how economists can come in many forms.

“The honey comes last and it's part of this sort of the trading and the demonstration,” said Meldrum. “Always kind of showing you how economists can maybe be a bit simpler than they are.”

Many young children were in attendance, which was an encouraging sign for Burns.

“I think we need engagement to be part of the solution to these problems,” he said.

Burns added he hopes people who attended will consider the environment and their relationships to animals.

Agent: Rushdie off ventilator and talking, day after attack

'The Satanic Verses' author Salman Rushdie was taken off a ventilator and able to talk Saturday, a day after he was stabbed as he prepared to give a lecture in upstate New York.

Arizona parents arrested trying to get in locked-down school

Police arrested three Arizona parents, shocking two of them with stun guns, as they tried to force their way into a school that police locked down Friday after an armed man was seen trying to get on campus, authorities said.

Parent of child with rare form of epilepsy distressed over N.S. ER closures

Kristen Hayes lives close to the hospital in Yarmouth, N.S., but she says that twice in the past month, her son, who has a rare form of epilepsy, has been taken by ambulance to the emergency room there, only to be left waiting.

The Canada Border Services Agency is temporarily allowing fully vaccinated travellers a one-time exemption to not be penalized if they were unaware of the health documents required through ArriveCAN.

Average rent up more than 10% in July from previous year, report says

Average rent in Canada for all properties rose more than 10 per cent year-over-year in July, according to a recent nationwide analysis of listings on Rentals.ca.

The Los Angeles Police Department has ended its investigation into Anne Heche's car accident, when the actor crashed into a Los Angeles home on Aug. 5.

Volunteers armed with smartphones are using a 3D-modelling app to preserve Ukraine's cultural heritage one snap at a time.