REGINA -- Police are blocking a portion of Ninth Avenue North near the Co-op Refinery Complex to clear "structures and debris" from city property in the area.

In a news release, Regina police say they're working to "restore a safe physical environment" to "support peaceful, lawful and safe picketing by members of Unifor Canada, Local 594 and their supporters."

Police say taking down blockades into the refinery is in accordance with a court order limiting the length of time union members could stop trucks from entering or exiting the property.

Vehicles and pedestrians are being restricted from entering the area to remove the barricades. Police say they have obtained permits from the city to block the roadway.

Picketing workers will be able to walk with signs and other materials in the area, but police say vehicles "not related to the operation of the businesses in the area" won't be allowed.

In a statement, the Co-op Refinery said that it is "encouraged" by the police action removing the barriers. It also says the move opens access to emergency services and fuel loading facilities at the McDonald Street terminal.

"Fuel trucks have begun loading today as CRC ensures much-needed fuel gets to the communities that need it," Co-op said in a release.

Earlier this week, Co-op Card Lock stations limited customers to 300 litres of diesel and 100 litres of gasoline per card per day in Saskatchewan, Alberta and Manitoba.

Before the blockades came down, Minister of Labour Relations and Workplace Safety Don Morgan said the province would only appoint a mediator if the blackades were removed by the union.

On Thursday evening, Unifor Local 594 issued a plan that it said would end the labour dispute as early as Monday.

Below are the proposals made by Unifor:

“Binding arbitration is a mechanism available in any labour dispute in Saskatchewan if both sides agree to it. The government cannot impose it under the existing legislation,” Morgan said in an emailed statement.

It is unclear whether a mediator will be appointed now that police have removed the blockades. 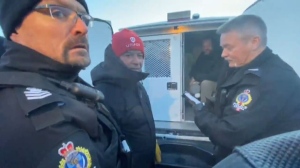