REAL outlined the renovation plans at executive committee on Wednesday.

The committee unanimously approved the proposal which includes REAL coming up with the remaining $800,000 needed through partnerships and grants.

“By turning it into a space that programs for 30 weeks a year relative to recreation, it now becomes a very active location on campus and will now generate about 200,000 new users, but also maintain our great trade show events,” Tim Reid, CEO of REAL, said. 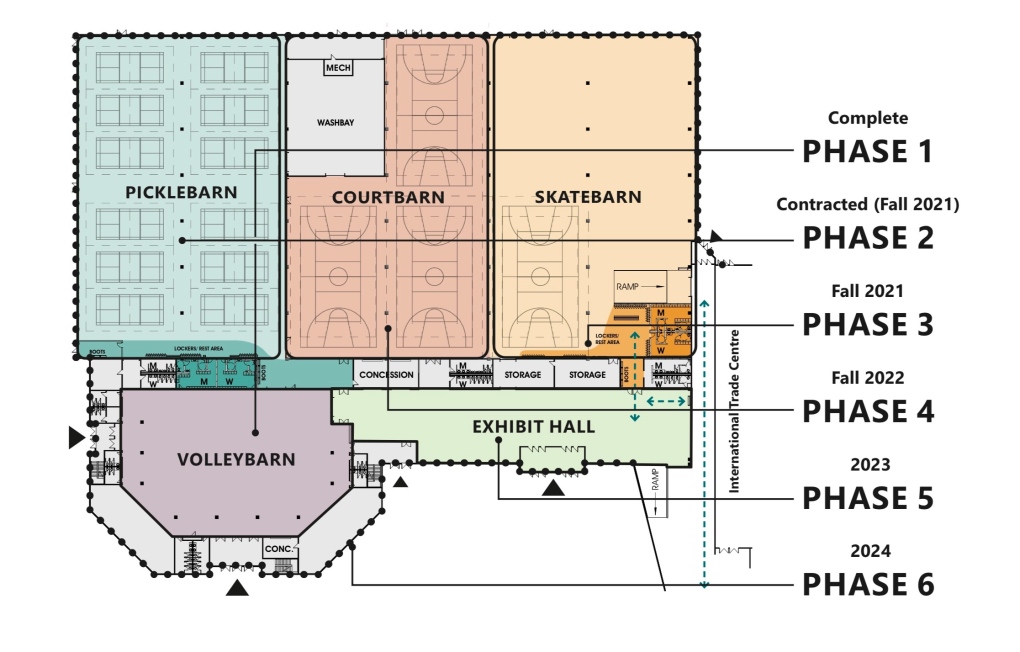 A blueprint of the Canada Centre with renovation phases outlined, supplied by REAL.

The money from council is slated to go towards maintenance upgrades.

“That investment is going into both the flooring for the courts in the picklebarn, in the volleybarn, the basketballbarn and the skatebarn, but also into the h-vac unit,” Sandra Masters, mayor of Regina, said. “There is some deferred maintenance on site and so this is going to upgrade both the h-vac and heating and air conditioning in a very old building.”

Masters said this is a great investment.

“The location isn’t lost on anybody, it’s next to north central, so providing a safe space for programming for them and recreation is incredibly important for all of our mental health,” Masters said.

Reid believes these upgrades will also bring new life and new events to the campus.

“It’s modernizing the facility, but most importantly it brings new clients, new guests and new visitors to campus,” said Reid.

He added that the courts will serve as multi-purpose and can be removed for vents such as Agribition and the Farm Progress Show.

The Regina skateboard coalition is also excited about the renovations and additions. It has been looking for a place to go since the old skatepark was torn down to build the new Mosaic Stadium.

“It meaned so much to me as a kid growing up having that space and every other kid, I’d want them to have the same opportunities i had growing up. for like inner city youth, it’s a super accessible space,” David Chapados, vice-president of the Regina skateboard coalition, said.

The proposal will now go to city council for final approval on June 23.

Prime Minister Justin Trudeau headed to the G7 summit in Germany on Saturday without a consensus from the Commonwealth to condemn the Russian invasion of Ukraine, but with a chorus of countries calling for help to overcome the fallout of the war.

WHO panel: Monkeypox not a global emergency 'at this stage'

The World Health Organization said the escalating monkeypox outbreak in nearly 50 countries should be closely monitored but does not warrant being declared a global health emergency.

A barge that ran aground near Vancouver's English Bay last year quickly became an accidental attraction, drawing selfie-seekers and inspiring T-shirt designs. But after seven months, residents seem to have grown weary of its hulking presence on the shoreline.

Ukraine's largest LGBTQ rights event, KyivPride, is going ahead on Saturday. But not on its native streets and not as a celebration.