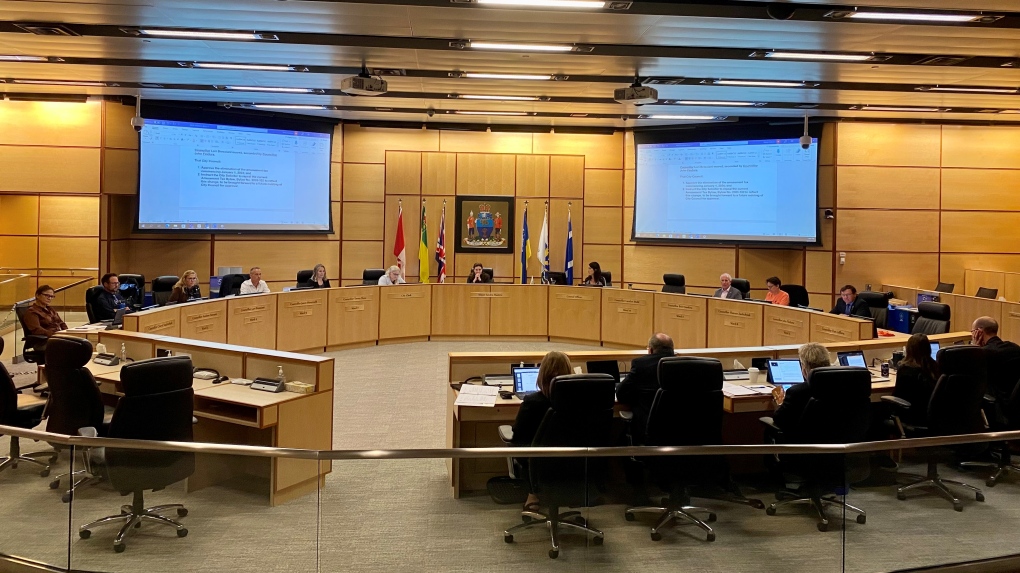 Regina city council is pictured during a meeting on Sept. 28, 2022. (Allison Bamford/CTV News)

Regina City Council voted in favour of reducing the amount of tax placed on movie theatre tickets with the idea of scrapping the tax completely by 2024.

A 10 per cent amusement tax is placed on commercial cinema admission fees. Council voted to slash the tax in half to five per cent.

“Last week at executive it was acknowledged that we have to bring it down,” said Mayor Sandra Masters.

However, councillors stopped short of approving the bylaw amendment at Wednesday’s council meeting.

The bylaw needed unanimous approval to pass in its third reading. Counc. Bob Hawkins was the sole vote against the bylaw.

Council will vote on the bylaw amendment at their next meeting on Oct. 12. Once the bylaw passes, the amusement tax will drop to five percent.

Regina and Winnipeg are the only two cities in Canada to have an amusement tax on movie theatres, making cinemas in both municipalities some of the highest taxed theatres in the country.

“We have been writing the province and the city for six months on this issue,” said Michael Paris, a member of the Movie Theatre Association of Canada.

“Every incremental cost impacts the ability of people crossing the threshold into the theatre. We need to remain a competitive environment to continue to get film with our partners in distribution but at the end of the day we need people in our locations.”

Even when council passes the bylaw and lowers the amusement tax to five per cent, the city’s cinemas will still face the highest amount of taxes among their Canadian counterparts at 16 per cent.

If all things continue to plan, Masters said the amusement tax will be eliminated on Jan. 1, 2024.

“In the meantime, we may look at expanding it to (other tickets) to understand whether or not it’s a funding source for tourism and events,” she said.

“We do not have a lot of funding sources other than a mill rate increase, which is very restrictive."

Council voted in favour of increasing leisure service fees across the city.

Administration recommended an “inflationary increase” based on the Consumer and Municipal Price Indexes to service and admission fees for sport, culture, golf and recreation facilities in Regina.

The city has not addressed recreation fees since 2018 when council approved admission costs through to the end of 2020.

“The proposed increase will assist in maintaining cost recovery levels while ensuring that prices remain affordable for Regina residents.”

“The proposed fee increase ensures cost recovery levels will remain relatively stable, customer impact will be minimized, and consistency with other providers and municipalities will be maintained,” the report stated.

The city will continue to offer an affordable access program for residents who experience financial barriers to accessing recreational services.

According to administration, the fee increases will bring in approximately $675,000 in new revenue over three years.

Parking continues to be a controversial topic in the city with lengthy council discussions about apartment parking lots proving to be no different.

After several reports, along with requests for more data, city council is no further ahead in its decisions around minimum parking stall requirements.

At Wednesday’s meeting, council discussed a supplemental report that stems from an initial report requested in January 2021.

The report outlines potential implications for three minimum parking scenarios in suburban areas. The scenarios are:

The report looked into national parking trends as well as demand at two different apartment locations in Harbour Landing and the Greens neighbourhood. City workers performed on-site visits at these locations. One site visit took place during working hours on a weekday and the other took place on a weekend

Administration did not find parking issues from the study and reported that there was “ample availability and no obvious illegal parking, although less available during the weekends.”

Counc. Lori Bresciani questioned why administration did not perform site visits during evening hours when more people would be home from work.

“I have family who wants to visit me. They can’t park anywhere,” Bresciani said.

“Parking is an essential piece of how we live.”

Evan Lascue, vice-president of planning for Avana Developments, spoke against an increase to parking requirements.

He would like to see developers allowed to determine their own parking requirements based on street parking availability and access to transit in the area.

Lascue said it is an “insufficient use of land” if parking stalls sit unused, even if they are for visitors.

Stadnichuk and Stevens both want to eliminate parking stall minimums and leave it up to developers to decide.

In 2019, council voted to reduce minimum parking requirements from 1.5 stalls to one stall per unit.

According to administration’s supplemental report, not enough time has passed to fully assess the results of reducing the minimum parking from 1.5 stalls to one stall.

Bresciani’s amendment passed. Administration is expected to report back to council in Q2 of 2023.

Starting on Thursday, eligible Canadians can apply through the Canada Revenue Agency to receive funding as part of the first ever federal dental-care program, and as of Dec. 12 applications will open for low-income renters looking to access the one-time top-up to the Canada Housing Benefit.

A 101-year-old message has been discovered by workers removing the base of a former statue in front of the Manitoba legislature.

Grandparent scams are on the rise. Here's how you can protect yourself

Police across the country are seeing a rise in criminals preying on fears of the elderly with what's known as grandparent scams.

Emails released through a public inquiry suggest federal Liberal political aides were scrambling earlier this year to figure out the extent to which members of the Canadian Armed Forces were supporting "Freedom Convoy" protests that had gridlocked downtown Ottawa.

Amazon CEO Andy Jassy said Wednesday the company does not have plans to stop selling the antisemitic film that gained notoriety recently after Brooklyn Nets guard Kyrie Irving tweeted out an Amazon link to it.

Oklahoma musician Jake Flint died unexpectedly over the weekend, hours after getting married, his publicist says. He was 37.

A judge declared a mistrial Wednesday after jurors said they were hopelessly deadlocked at the trial of "That '70s Show" actor Danny Masterson, who was charged with three rapes.

The former CEO of the failed cryptocurrency exchange FTX said Wednesday that he did not 'knowingly' misuse customers' funds, and said he believes his millions of angry customers will eventually be made whole.