Regina mayor to submit motion to remove Counc. LeBlanc from board of community safety organization

Regina mayor to submit motion to remove Counc. LeBlanc from board of community safety organization

Regina Mayor Sandra Masters is set to submit a motion at this week’s city council meeting, proposing to remove Ward 6 Counc. Dan LeBlanc from the board of directors of a municipal corporation.

Community & Social Impact Regina, is a municipal corporation focused on “facilitating and monitoring coordinated community and social impact strategies to support the well-being, health, safety, and social inclusion of residents in Regina and region,” according to the city’s website.

Counc. LeBlanc was appointed to the inaugural board of directors of the organization on Sept. 14, 2022 with a term running until Dec. 31, 2023.

City council is set to reconsider appointing LeBlanc to the board of directors and is set to appoint a new member of council to serve out the remainder of the term.

"I say, it's bad news to remove the representative from Heritage from the organization tasked with social issues, and I take it they are not planning to put forth councillor Stevens," LeBlanc told CTV News Monday morning.

"So neither Heritage nor North Central are likely to be represented on this very organization tasked with social issues which are most acute in those neighbourhoods."

The motion will be submitted by Masters at the city council meeting on Jan. 25. 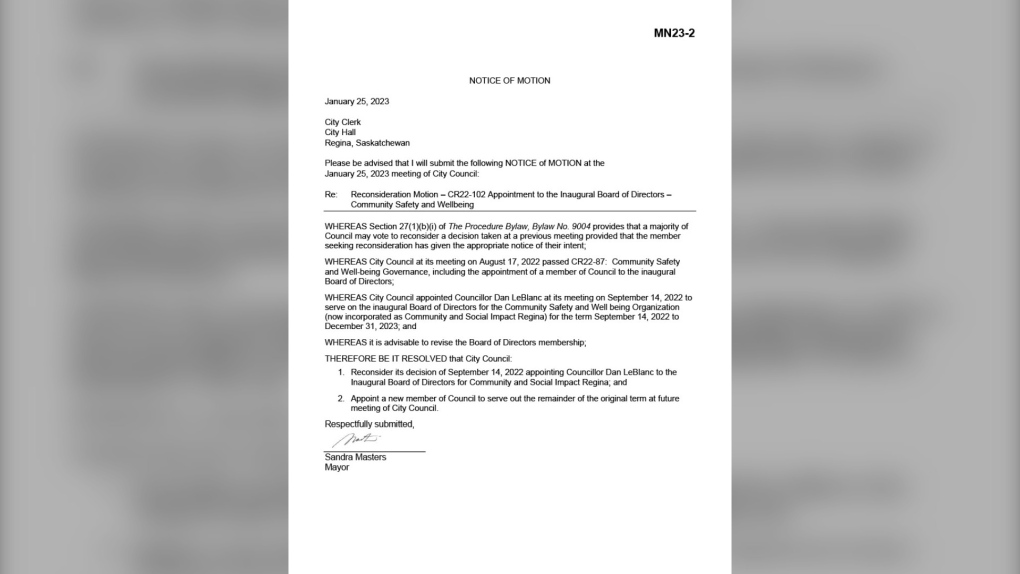 The motion, introduced by Mayor Sandra Masters, calls for the reconsideration of LeBlanc's appointment to the board of directors of Community & Social Impact Regina. (Source: Regina City Council Agenda)

There has been strife between council members since LeBlanc issued a mandamus application back in December, against City Manager Niki Anderson, for not including funds to end homelessness in the proposed city budget.

Following the loss of the court challenge, LeBlanc said that he would have been disappointed in himself had he not stood with those who are vulnerable in the community.

He added that the tension on council remains, and the motion by Masters represents where council currently stands as a whole.

"It seems to me, Mayor Masters, perhaps rightly, believes she has a majority who are upset about those of us on council who want to take bold, responsible action on these issues and is to some extent solidifying support on that point," LeBlanc said. "To say if you take this bold action, we will take actions against you to ensure it doesn't occur."

In a written response to CTV News, the mayor's office stated:

"Mayor Masters will not discuss this matter before City Council has the opportunity to consider the motion."