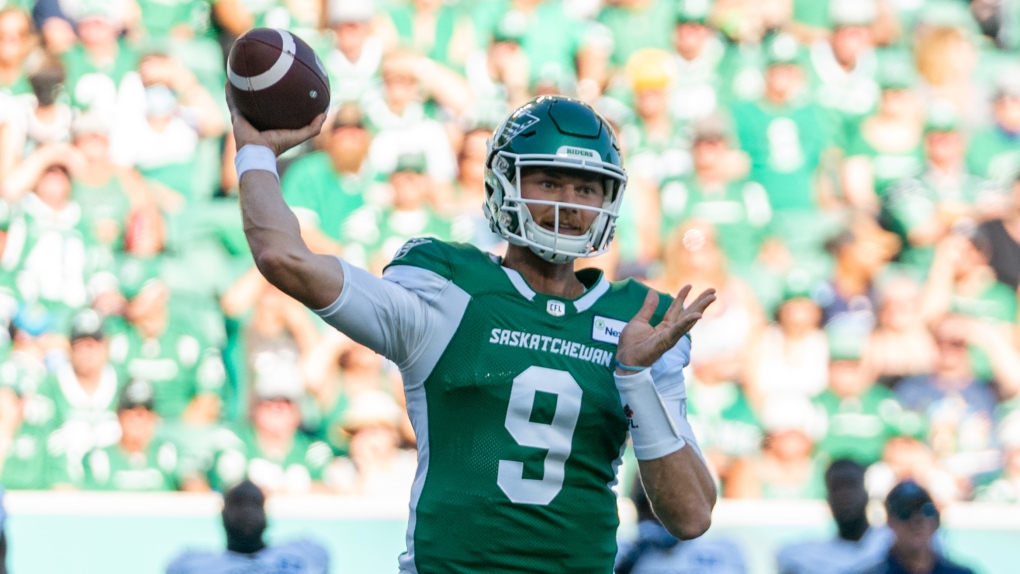 Saskatchewan Roughriders backup quarterback Jake Dolegala has been charged with impaired driving, according to a statement from the team.

The Riders said Dolegala informed them on Sunday that he had been arrested and charged in Regina over the bye week.

“I first would just like to apologize to my teammates, to the fans, to this organization,” said Dolegala, who addressed the media on Monday.

“It’s difficult and embarrassing to go through something like this. I never want to be a distraction to our goal to what we want to accomplish this year with playoffs coming up.”

“He feels bad about it and hopefully he learns from it and he grows from it. It’s an unfortunate situation. We’re going to support him as one of our teammates but we also know he has some things he has to do to make things right,” Dickenson said.

“Jake’s one of my closest friends on the team. He’s a guy I got his back. I just found out the news today just like you guys but I will support him through it,” Riders quarterback, Cody Fajardo said Monday.

“Obviously he feels bad about it and he made a mistake. A lot of people make mistakes and hopefully he can learn from this and be better. But I’ll be in his corner as he’s a guy I’ve tried to take under my wing as a young quarterback in this league.”

The team is suspending Dolegala for one game and has informed the league office.

The Saskatchewan Roughriders have issued the following statement. pic.twitter.com/3vjQLBPZru

“Drinking and driving is a significant problem in our province, one that can have dangerous consequences, and we are disappointed in Jake for his actions,” the Riders said in a release.

The incident was confirmed by a news release from the Saskatchewan RCMP.

The White Butte detachment of the RCMP received a report of a possible impaired driver in Emerald Park at around 8:30 p.m. on Sept. 17, police said.

RCMP officers responded to the call, found the driver, confirmed he was impaired and arrested him. Dolegala currently faces one count of impaired operation of a conveyance.

BREAKING | Bank of Canada raises key interest rate to 4.25 per cent, its highest since 2008

The Bank of Canada has raised its overnight rate by 50 basis points to 4.25 per cent, marking its seventh rate hike in nine months. The last time the bank’s policy rate was this high was in January 2008.

Royal Bank of Canada economists say the country has reached a record number of renters as the number of people renting has increased at three times the rate of homeowners in the past decade.

The Royal Canadian Mint is issuing a new $2 coin with a black ring in honour of the late Queen Elizabeth II.

Thousands of police officers carried out raids across much of Germany on Wednesday against suspected far-right extremists who allegedly sought to overthrow the government in an armed coup. Officials said 25 people were detained.

The discovery of a giant 100 million-year-old marine reptile's skeleton in Australia has been hailed by researchers as a breakthrough that may provide vital clues about prehistoric life.

Time Magazine on Wednesday named Ukrainian President Volodymyr Zelenskyy its person of the year, awarding him the accolade 'for proving that courage can be as contagious as fear.'

Apple Inc has been sued by two women who said its AirTag devices have made it easier for their former partners and other stalkers to track down victims.