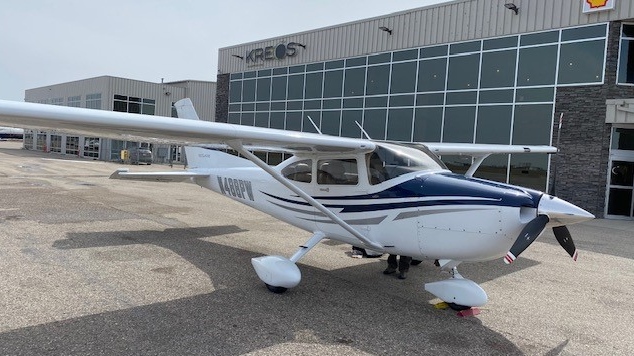 The plane is expected to be patrolling over the city by the end of October. (Supplied: Regina Police Service)

The Regina Police Service (RPS) purchased its first aircraft, a Cessna 182, which is currently getting cameras and surveillance equipment installed onboard.

The plane is currently in Saskatoon being outfitted but RPS expects to have the aircraft patrolling over the city by the end of October.

Elizabeth Popowich with RPS said they received the second-hand plane in April of this year.

Saskatoon has operated a similar plane for a number of years.

“If you can spot the suspect from the air, watch the suspect until they stop the vehicle somewhere and call in your arrest teams to take action on the ground, you have eliminated a whole lot of risk to the public, the police and even the suspects themselves,” said Popowich.

Regina’s police aircraft was purchased from a dealer in Texas for just under $400,000 U.S. The 2005 model Cessna will be based out of the Kreos hangar at the Regina airport. Equipment will bring the final price to just over a million dollars with some of the money coming from a proceeds of crime fund and SGI.

“They’re often used to assist patrolling members that can find people who may have been involved. For example, in a break and enter, those property insurance claims can add up as well and so there is a benefit to SGI on that front,” said Tyler McMurchy with SGI.

The plane will do much of its flying at night and the constant circling over the city could pose a noise issue for some residents.

Police are taking that into account and are installing a special muffler to make this aircraft quieter than most.

Bob McGrath, an actor, musician and children’s author widely known for his portrayal of one of the first regular characters on the children’s show 'Sesame Street' has died at the age of 90.

Former Toronto Blue Jays first baseman Fred McGriff has been elected to the Baseball Hall of Fame on Sunday.