Saskatchewan could more than double its record number of COVID-19 hospitalizations in February, according to government modelling that was leaked online earlier this week.

Modelling is not a prediction, but projections of what could happen in different scenarios based on different assumptions.

This modelling lays out five scenarios that factor in the doubling rate for the virus, Omicron’s severity compared to Delta’s, reductions in population mixing and the length of hospital stays.

In the first and worst-case scenario, COVID-19 hospitalizations will reach more than 1500 in the second half of February. This does not include patients in the ICU. This scenario factors in a doubling time of 6.1 days, assumes Omicron is 60 per cent less severe than Delta, hospital stays are 25 per cent shorter compared to Delta, and “moderate” mixing takes place.

The second scenario projects hospitalizations peak in mid-February, with around 1,400 patients. This is based on the assumption Omicron doubles every 4.6 days, the severity is reduced from the first scenario for some age groups and hospital stays are 33 per cent shorter compared to Delta. This scenario factors in current population mixing.

If mixing is reduced by 67 per cent for four weeks starting Jan. 19, the next scenario shows hospitalizations peaking around 1,125 at the start of February.

In the best-case scenario, COVID-19 hospitalizations peak at the beginning of February, with roughly 625 in hospital. This scenario assumes Omicron doubles every 4.7 days, the severity of the virus is reduced from the first scenario, patients’ hospital stays last one-third as long as they did for Delta, and there is 67 per cent reduction in population mixing starting Jan. 19. 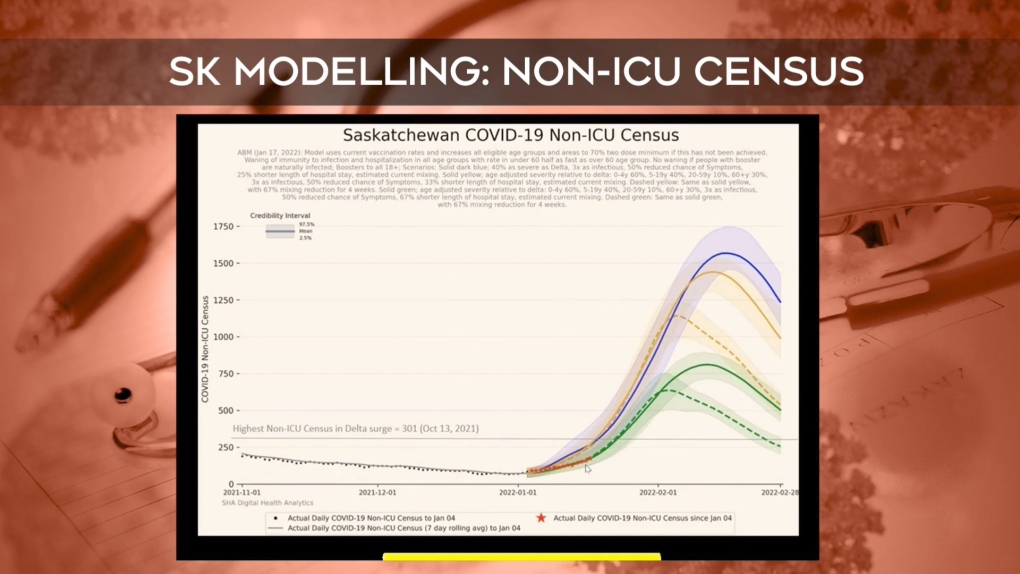 If there is not a reduction in population mixing, the scenario shows hospitalization numbers could peak in mid-February with more than 750 patients.

Dr. Alex Wong, an infectious disease physician, said measures are needed to reduce gatherings in order to minimize the impact to the healthcare system.

“It’s going to be horrendously painful for hospitals and for all Saskatchewan citizens, basically, if you are going to need any kind of health care services during that time frame,” Wong said.

Saskatchewan’s current record number of hospitalizations is 356, which was set on Oct. 6 during the fourth wave.

While Dr. Shahab doesn’t do the modelling, he does anticipate record-high hospitalizations in the fifth wave. However, he said we could see fewer ICU admissions than we did in the fourth wave.

Due to a high infection rate, Shahab said ICU admissions could still reach as high as 75 or 100.

“These projections are on a day-by-day, week-by week basis,” Shahab said.

“The actions we take today can make a difference one, two or three weeks into the future.”

Shahab continues to encourage everyone to get vaccinated, boosted, avoid non-essential contacts and wear their best mask, adding these are the behaviors that could change the trajectory.

The province uses modelling as one tool to guide its COVID-19 response. However, in a statement, Premier Scott Moe said officials are placing a greater emphasis on “closely tracking actual real-time data” from across the country.

“The government recognizes that hospitalizations are rising and will continue to rise for some period of time,” Moe said in the statement.

“However, we see no clear evidence that lockdown measures have reduced hospitalizations, ICU admissions and deaths in other provinces and as a result, there is no reason to impose harmful new restrictions in Saskatchewan.”

Wong disagrees with Moe’s argument that restrictions do not minimize COVID-19’s impact, saying it is “plainly” untrue.

“This type of narrative from the premier is incorrect and, quite frankly, it’s dangerous,” Wong said.

The official opposition said the premier is “playing politics” when it comes to his decision not to implement gathering limits. NDP leader Ryan Meili is calling on the government to publicly release and mandate Dr. Shahab’s public health recommendations.

UPDATED | Ont. and Que. scramble to recover from thunderstorm that left at least 8 dead

What is a 'derecho'? Climatologist explains Saturday's powerful storm

The storm that moved across Ontario and Quebec Saturday is known as a 'derecho', a powerful kind of windstorm that is long lasting and far-reaching.

More than 1,000 lawyers in Ontario have signed a petition to make all court appearances 'presumptively virtual unless parties and their counsel agree otherwise.'

Guests at an Indigenous-owned resort in B.C.'s Interior were evacuated Sunday morning and watched as firefighters tried to contain the flames that had engulfed the building's roof.

A military plane carrying enough specialty infant formula for more than half a million baby bottles arrived Sunday in Indianapolis, the first of several flights expected from Europe aimed at relieving a shortage that has sent parents scrambling to find enough to feed their children.

Russia pressed its offensive in eastern Ukraine on Sunday as Poland's president traveled to Kyiv to support the country's European Union aspirations, becoming the first foreign leader to address the Ukrainian parliament since the start of the war.

Beginning at sunrise on Monday, the Tk'emlúps te Secwépemc will host a solemn day of ceremony and reflection to mark the one-year anniversary of unmarked graves being located at the site of the former Kamloops Indian Residential School.