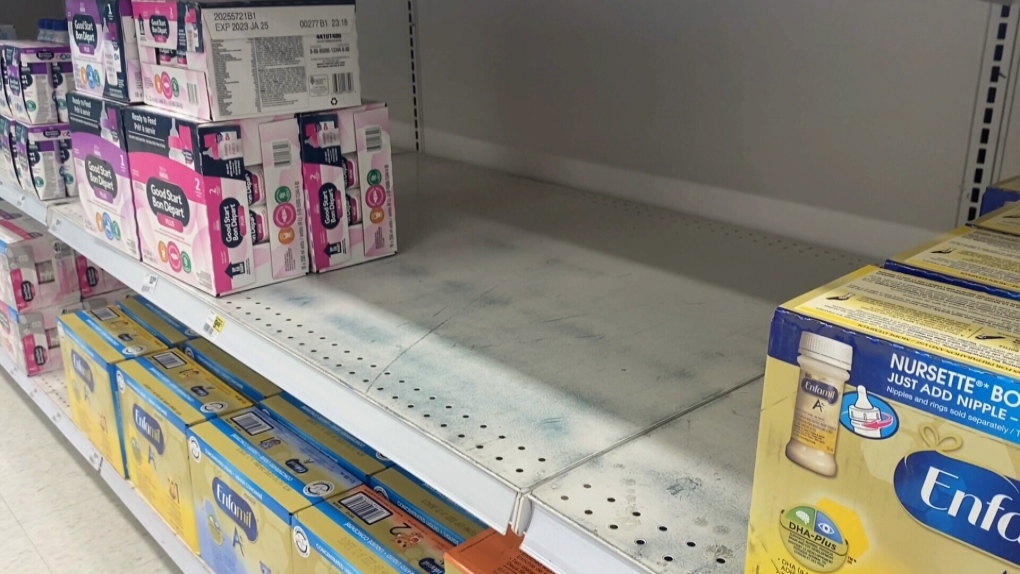 A baby formula shortage caused by a recall of products manufactured at a facility in the United States has created a ripple effect into Saskatchewan, with many mothers feeling the strain trying to feed their babies.

In February, several powdered Similac, Alimentum and EleCare products were recalled when four babies got sick with a bacterial infection after consuming formula made at the Abbott Nutrition facility in Michigan. Two of those babies died after becoming sick.

We’re initiating a proactive, voluntary recall of powder formulas manufactured at our Sturgis, MI plant, including Similac, Alimentum and EleCare.

The Canadian Food Inspection Agency (CIFA) also issued a recall on powdered Abbott Brand baby formula linked to the recall issued in the U.S. It also noted a possible link to Salmonella, according to Health Canada.

The recall has caused issues for parents with babies who can only use particular kinds of formulas due to allergies or health conditions.

Nakaylia Tudway-Cains is a Saskatchewan mother who has struggled feeding her baby since the recall.

Since her son is allergic to cow’s milk protein, he could only tolerate one kind of formula that was affected by the recall. Her son ended up having to resort to another formula, which caused him pain and discomfort.

Tudway-Cains said she is paying over $400 a month for a formula that is not sold over the counter, because of the recall.

“The price for infant formula is outrageous. Recalls happen, but there needs to be more options for babies with allergies,” she said.

Regina mom Beth Valiaho said the situation has been difficult for friends of hers.

“As a new mom, this is completely scary. Moms in my circle are having to go to four stores to try and secure formula.” she said. It’s been rough.”

Some mothers have turned to breast milk donations to feed their babies during the shortage.

Danielle Lavoie is a mother in Regina who donates her breast milk to parents in need. While she does not rely on formula herself, she said she knows the recall is a scary situation and is lucky to be able to help out.

“I had never thought of [donating] before but once I heard about it, I decided to give it a go,” she said. “I’m happy to do it.”

“Now that I know there are women who need, I have lots to give,” she said.

While it is an option for some, not all mothers are able to give their babies breast milk, and some say it does not fill the gap.

After investigation, the Centers for Disease Control and Prevention (CDC) reported no conclusive evidence to link the illnesses and deaths of the babies to Abbott’s formulas. The CDC also found their product tested negative for Salmonella.

On Monday, May 16, Abbott agreed to enter into a consent decree with the FDA related to the Michigan baby formula plant. The agreement took steps to resume production of the facility, according to a press release on Abbott’s website.

We’ve agreed to enter into a consent decree – a legal agreement – with the FDA for our Sturgis, Mich., plant, a major step toward reopening our facility and helping to ease the infant formula shortage.

Since receiving FDA approval, Abbott is looking to restart production in the Michigan facility on June 4. However, it would take six to eight weeks from the start of production for the formula to arrive back on shelves.

Some emergency rooms across Canada shutting down amid staff shortages

Hospitals overwhelmed by the pandemic’s onslaught are still facing a number of challenges, causing unprecedented wait times in emergency rooms across the country.

Twin brothers in their early 20s were responsible for the shooting that injured numerous police officers at a bank in Saanich, B.C., earlier this week, RCMP alleged Saturday.

Researchers in British Columbia say the province's endangered southern resident orcas have not been getting enough food for years, with some of the worst bouts of hunger occurring since 2018.

It's been said no one's success is complete without failure, but a new international exhibit in Calgary is proving that even some of the most talented innovators had some of the worst ideas for consumers.

Animal rescue groups are criticizing a new policy by the Canadian Food Inspection Agency that will ban the import of dogs from more than 100 countries.