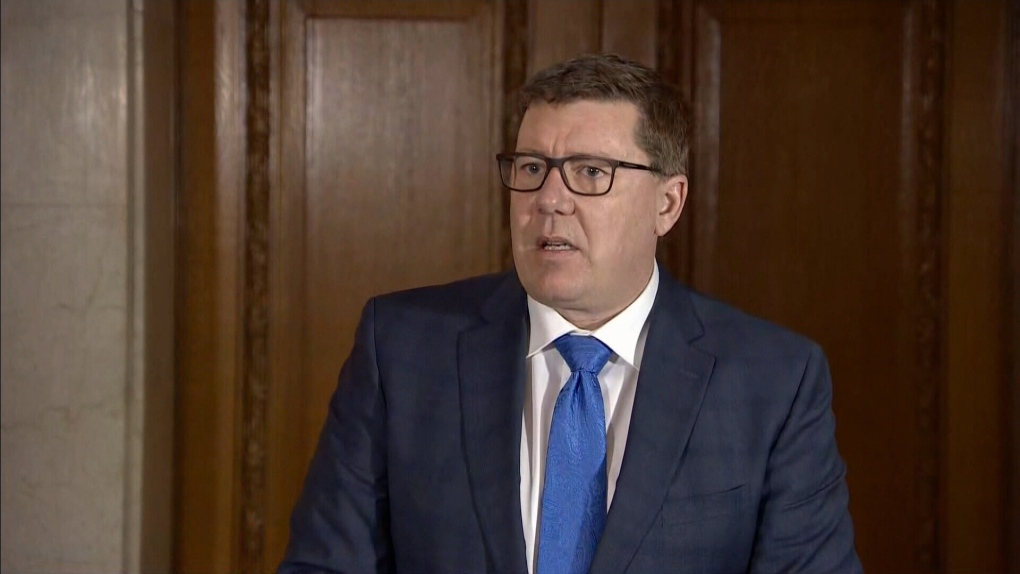 Scott Moe speaks to media at the Saskatchewan Legislative Building on Feb. 16, 2022.

Saskatchewan's premier called his party’s win in Tuesday’s Athabasca byelection a “historic win,” with the NDP losing the long-held seat.

Following the preliminary count, Saskatchewan Party candidate Jim Lemaigre was elected to represent the constituency with just over 51 per cent of the vote.

“With last night's victory and Athabasca we truly do represent a constituencies from border to border the border to border in this province,” Premier Scott Moe said during a press conference Wednesday.

The NDP's Georgina Jolibois, who is mayor of La Loche and a former MP, came away with 40 per cent of the vote.

With the loss, the Saskatchewan NDP holds 12 out of the 61 total seats in the legislature. The Athabasca seat had been under NDP control since 1999.

“I’d also like to impress on him the importance of the job he is taking on. Whether it’s lack of cell coverage, lack of available health services, or crumbling roads, Northerners need a strong advocate in the legislature to bring their voice to Regina, and that will require him to be a dissenting voice within his own government,” Meili said.

Moe implied the election results were an indictment on recent policy decisions by the NDP.

The premier also made direct comments regarding Meili’s policies in a tweet Wednesday morning.

There was also a message for Ryan Meili and the NDP in the Athabasca byelection, as they lost one of their traditional strongholds.

I hope Mr. Meili will reflect on the hateful, divisive language he has been using in recent weeks.

Meili did not directly respond to Moe’s claims in his statement.

“We made strong connections and spoke with thousands of Northerners about the kind of change they need to see in their communities. These issues will drive our advocacy moving forward,” Meili said.

Moe said Lemaigre will be joining the Saskatchewan Party caucus immediately and will be officially sworn in when the legislature reconvenes in the spring.

“Jim will not only be a strong voice on behalf of his constituents, but I think he’ll also be a very strong voice within the government with respect to you know how we continue down the path of reconciliation with our Indigenous people in our province,” Moe said.

Just more than 24 per cent of registered voters cast their vote in the byelection, according to Elections Saskatchewan.

There could be as many as 31 outstanding mail-in ballots that could be included in the final count — not enough to affect the outcome of the bylection.

The final count will occur on Feb. 28.

Cindy Williams, who was among the most recognizable stars in America in the 1970s and 80s for her role as Shirley opposite Penny Marshall's Laverne on the beloved sitcom 'Laverne & Shirley,' has died, her family said Monday.

The beginning of February is expected to bring Arctic-like temperatures across much of Eastern Canada, thanks to frigid air from the polar vortex. The cold snap will descend on Eastern Canada this week, with temperatures becoming seasonable again on Sunday. In between, much of Ontario, Quebec and Atlantic Canada can expect the coldest days yet this winter.

The Mindbender roller coaster at Galaxyland has been shut down, West Edmonton Mall announced on Monday. The redevelopment of the area is already underway, and the roller coaster is being decommissioned and removed.

Without Bobby Hull, the Winnipeg Jets wouldn’t be in the NHL right now. That’s how one of his former teammates feels about the late Jets forward.