REGINA -- The province of Saskatchewan announced its third death related to COVID-19 on Wednesday. 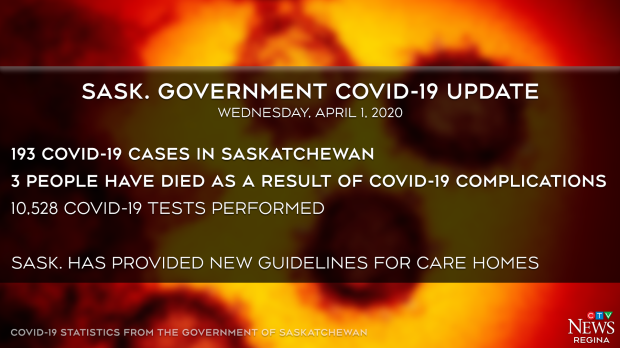 In addition the province has announced nine new cases, bringing the total cases in Saskatchewan to 193.

Four people in Saskatchewan remain in hospital. Three patients are receiving inpatient care in Saskatoon, and one is in ICU in Regina.

Nine more people have recovered from COVID-19 in Saskatchewan, bringing the total number of recoveries to 30.

Premier Scott Moe said that the measures put in place are working, but that we need to continue to do our part to slow the spread of the virus.

To date, 24 cases have been traced to a snowmobile rally in Christopher Lake on March 14.

Ninety-four cases are located in Saskatoon, 43 in Regina, 37 in the north, nine in central Sask., seven in the south region and three in the far north region. The cases are found in 55 per cent men and 45 per cent women.

The province says that 10,528 tests have been performed.

The province says that long-term care facilities, personal care homes, assisted living and senior condos need to avoid having residents gathered in one space. Shared dining areas and social activities where residents are gathered in groups of more than 10 are not advised.

Although the three fatalities in the province were in people over 70, officials say they remain unaware of outbreaks in care homes. Testing is being conducted in these spaces currently.