REGINA -- As the spring session gets underway, one of the first debates was about mask wearing.

Finance Minister Donna Harpauer was the first to deliver a speech without a mask this session as she introduced the provincial budget Tuesday. She wore her mask as a wrist band. The Opposition NDP thought it was ill advised. 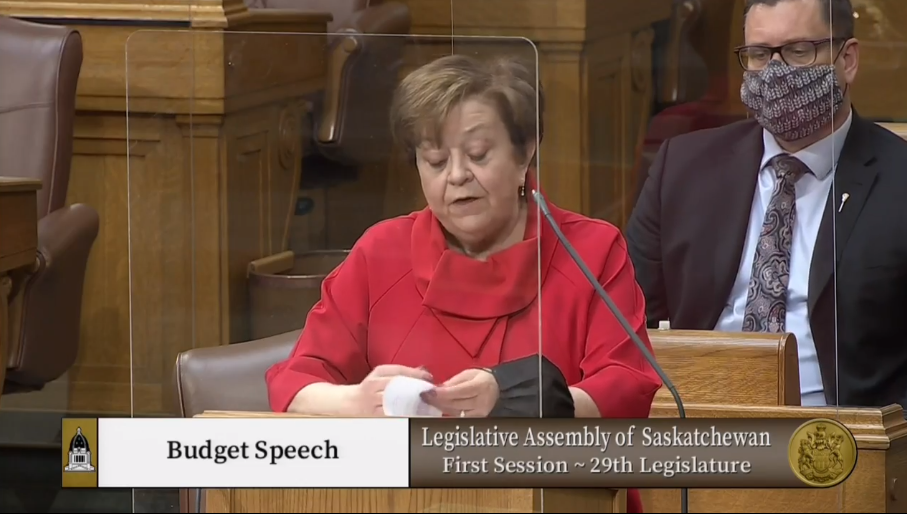 “I cannot say enough how dumb it is for people to be removing their masks in order to speak in close proximity to each other,” said NDP Leader Ryan Meili.

Public health rules allow government officials and media personnel to remove their masks when appearing on camera, provided they keep a distance from others. The house rule was confirmed at a committee meeting.

“We are very comfortable with where we have landed on that regard. Eight of the ten legislatures in the country do not require the wearing of masks when speaking,” said Jeremy Harrison, the government house leader. “In addition to that, we are the only chamber that has relocated all of the seats in the chamber so there are six feet between each individual desk.”

Harrison added that there are also Plexiglas barriers between all of the desks.

MLAs are being cautious this session with the high number of COVID-19 variant cases in Regina.

All will be staying in the city on the weekend to minimize the potential for COVID spread. They have also agreed to shorten the eight-week session by a couple weeks.

“But I do believe [this] is the right thing to do given what’s going on in Regina and area, not be travelling back and forth and potentially spreading variants,” said Meili.

MLAs even plan to meet this weekend in an attempt to get their work done a little faster. It will be the first session of the house on a Saturday in 30 years.