REGINA -- Following last week’s Winter wind storm, insurance brokers and landscapers are dealing with an uptick in claims and calls.

Saskatchewan Government Insurance (SGI) said the communities that it’s been receiving the most claims from are Regina, Moose Jaw, Weyburn, Radville, Estevan, Saskatoon and Milestone.

SGI said as of Monday afternoon, the company has received 1,745 property damage claims and 316 auto claims from the wind storm.

"This is a very significant storm event," Tyler McMurchy, Manager of Media Relations at SGI, said. "We don't have a final financial number of the damage. There are a number of factors that make us think it's going to be similar in scope or perhaps even more than that storm back in October of 2017 and that cost the company $16 million."

Moose Jaw’s Advanced Roofing said since the storm, phones have been ringing almost non-stop, with homeowners needing their roofs repaired.

"It's a lot tougher to do permanent repairs in the winter," Justin Fall, coowner of Advanced Roofing, said. "None of the adhesives are bonding in the winter so a lot of times what we're doing is we're doing a temporary repair and getting them through till the spring."

Fall said the influx in work has resulted in his crews working 18-hour days on Friday and Saturday.

He said this time of the year is especially difficult to fix roofs because of weather conditions and snow. 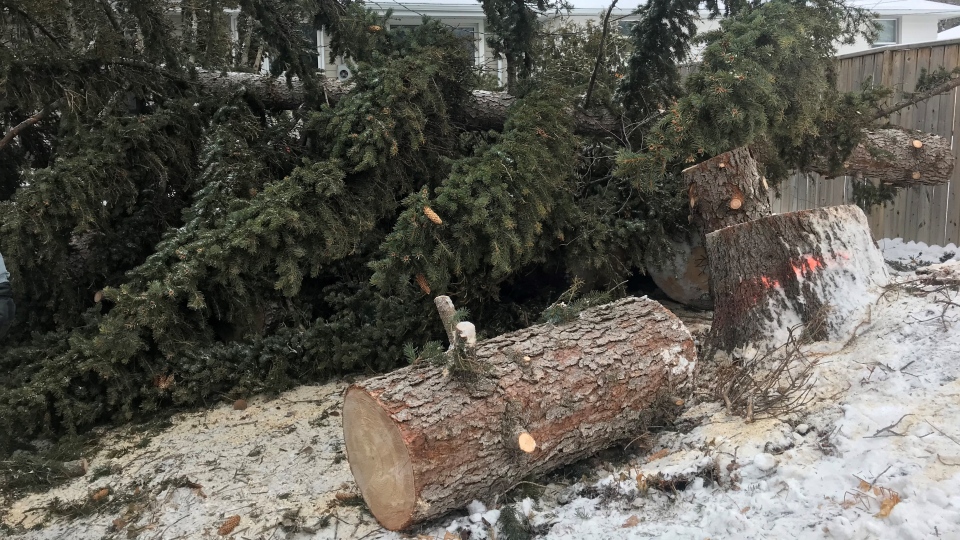 "I heard this big howling and just a big crack," Loretta said.

The tree did not damage any structures but its roots did disrupt the SaskEnergy line which the company fixed on Thursday.

A tree removal company is now cleaning up the tree.

The McClinton's are extremely grateful the tree didn't do more damage.

"We were so lucky that it basically landed on our elm tree which held it up," Loretta said. "If it came down, it probably would have crashed on the side of our house and probably our neighbour's house."