Cole Bratushesky was lost for words, and an explanation, as he watched a bright line move across the sky Sunday night in Regina around 10 p.m.

Astronomy professor Samantha Lawler has been fielding a number of questions about the train of lights in the last few days.

While she said it is “very freaky looking,” the lights are nothing more than satellites—53 SpaceX Starlink satellites to be exact.

“When they are first launched they are in a much lower altitude orbit and they are very close together so your eye actually can’t resolve the individual satellites,” Lawler said.

“It just looks like a very bright line moving across the sky.” 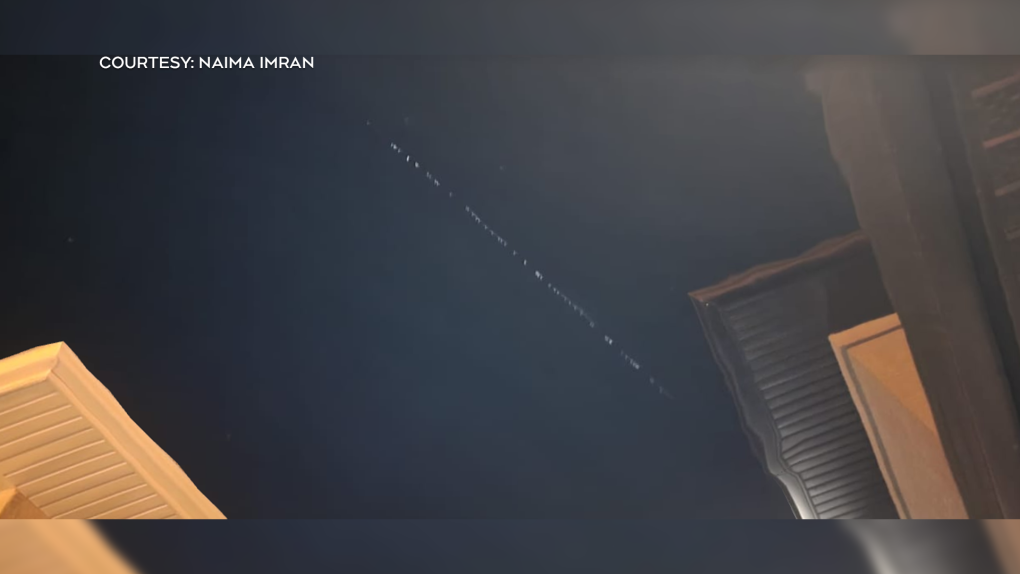 The growing influx of Starlink satellites over Saskatchewan's night skies have caused many residents to question what's happening over their heads.

According to the SpaceX website, the company launched the satellites to low-Earth orbit from Cape Canaveral Space Force Station in Florida on April 29.

While it will not be a permanent fixture in the night sky, Lawler said Starlink launches are “quite frequent,” which means it is “pretty common” to see this line of lights in the sky.

Starlink satellites are designed to deliver high-speed, broadband internet worldwide, including places where access has been unreliable, expensive or unavailable, according to its website.

There are more than 2000 Starlink satellites in orbit that make up more than one third of all active satellites, Lawler said.

As more satellites launch as planned, Lawler is worried of the impacts, including light pollution.

“They effectively dominate one particular altitude orbit,” she said, referring to the Starlink network.

“They are changing the way the night sky looks. When you go outside at night, if it’s within a couple hours of sunrise or sunset you will see Starlink satellites. They are bright and easily visible.”

Starlink provides a “very useful service,” Lawler said, but she believes the satellites can be engineered in a dark, safer and cleaner way.

On its website, Starlink said it has taken an experimental approach to reducing the brightness of its satellites, adding orbital brightness is “an extremely difficult problem to tackle analytically.”

The company said it works with astronomers to reduce satellite brightness and protect the natural night sky.

Aside from aesthetics, Lawler said further increasing the high-density orbit could lead to what is known as Kessler Syndrome.

“When two satellites collide it makes a bunch of debris that collides with more satellites that makes more debris,” she said.

“All of a sudden that part of orbit is unusable.”

An oversaturation of space junk, or debris, in that part of the atmosphere could impact future space flights, satellite launches, space telescopes and weather satellites, according to Lawler.

There are no environmental regulations in outer space, Lawler said, which is another concern for the astronomer.

Faulty or aging satellites that need to be replaced will “de-orbit” and burn up in the atmosphere. It is a quick and safe process, SpaceX said.

However, Lawler said it is still too soon to tell what impact it could have on the atmosphere.

She said there are discussions around regulating outer space and the atmosphere. However, regulations would have to happen at the international level. This would mean bringing the issue to the United Nations, which will take several years.

The U.S. Supreme Court has ended the nation's constitutional protections for abortion that had been in place nearly 50 years in a decision by its conservative majority to overturn Roe v. Wade. Friday's outcome is expected to lead to abortion bans in roughly half the states.

Canadian advocates are cautioning against complacency regarding abortions protections in place in Canada, after the U.S. Supreme court voted to overturn Roe v. Wade on Friday.

With the U.S. Supreme Court’s decision to end constitutional protections for abortion, 26 states are likely to ban abortions; 13 of which are expected to enact bans against the medical procedure immediately.

A Member of Parliament from rural Alberta went live on Facebook Friday to celebrate a United States Supreme Court vote to end constitutional protections for abortion.

Two people were killed and around 10 wounded on Saturday in a shooting at a nightclub in Norway's capital Oslo, Norwegian police said.

Miners working in a gold field in Yukon have uncovered what is being called the 'most complete' mummified woolly mammoth found to date in North America, officials announced on Friday.

An Ontario driver is speaking out after a shovel struck her windshield while she was driving on the highway.

This is who's in and who's out of Doug Ford's cabinet

Ontario Premier Doug Ford has unveiled his cabinet for the 43rd Parliament and there are some big changes to the front bench.