'This is a new beginning for us': Regina seniors centre hosts its own Olympic Games

REGINA -- The motto of the Olympic Games is faster, higher, stronger, together.

That’s exactly what happened at Harbour Landing Village this week as the intergenerational care centre hosted an Olympics of its own.

"It was a great way to get together as the Olympic spirit personifies," Jim Nedelcov, a resident of Harbour Landing Village and competitor in the games, said.

After more than a year of tight COVID-19 restrictions, the staff at Harbour Landing Village wanted to bring some fun to the facility, which led to the planning of the Olympic Games to coincide with the Summer Olympics happening in Tokyo, Japan.

"After being under lockdown for so long, it’s nice to be all together again and go back to what the village truly stands for," said Emma Saunderson, activities coordinator at Harbour Landing Village.

The teams competed in events like bowling, name that sound, scrabble, shuffleboard, pool and much more throughout the week, culminating in Friday’s closing ceremonies.

"I’ve never had [a medal] before, this is perfect, I love it," said resident Mary Lynn Lovering, who won a gold medal in bowling. 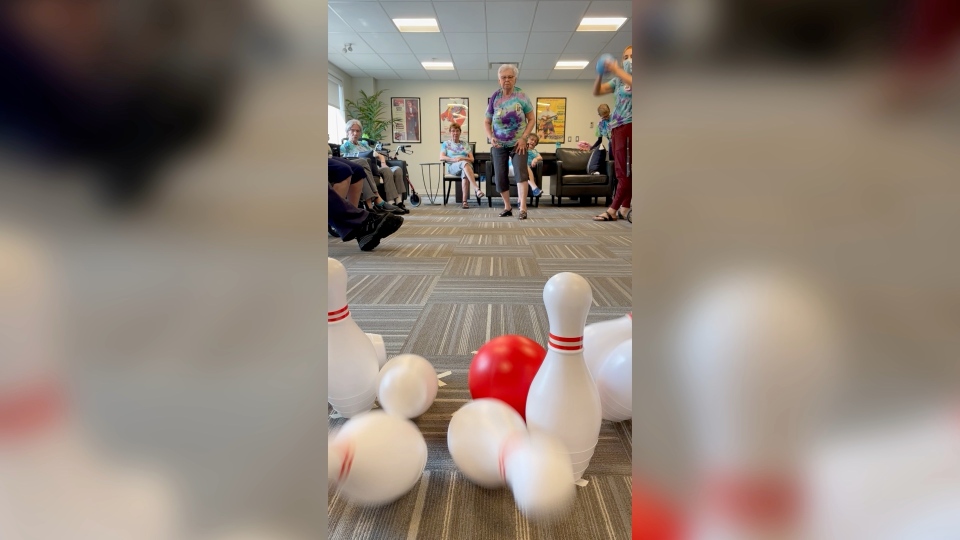 "This was great, I’m very competitive, but it was good to win a couple of medals," said Dan Quewezance, a resident who won so many medals he couldn’t name all the events.

"It was a lot of fun," added seven-year-old medal winner Peyton Anderson.

A closing ceremonies in Saskatchewan wouldn’t be complete without a visit from the Roughriders’ cheerleading team. The squad performed for the residents and took pictures afterwards.

COVID-19 restrictions over the past year put a damper on the community aspect of Harbour Landing Village, but residents feel like this week was a return to normal.

"It was nice to see people come together and finally get to do something different for once," Quewezance said.

"This is a new beginning for us," added Nedelcov.

After the success of the week, the residents at Harbour Landing Village are hoping these games become an annual event.