ESTEVAN -- He’s one of the youngest players this season in the Saskatchewan Junior Hockey League.

Defenseman Owen Simmons is 16-years-old, two years younger than most of his teammates with the Estevan Bruins.

“He was playing for OHA (Okanagan Hockey Academy) in Pentiction and I just really liked his game and his demeanor and everything about the kid,” said Head Coach Jason Tatarnic.

Tatarnic is in his first year as the bench boss for the Bruins.

Previously, he was Head Coach and GM of the Chilliwack Chiefs in the BCHL. He coached Simmons at summer camps in B.C., and recruited the right-shot player.

However, the recruiting process wasn’t so simple.

As a 16-year-old, Simmons’ entire family had to make the move to Estevan in order for him to play, as part of league rules.

“Great sacrifice,” Simmons said about his family’s move. “I think I’ll work hard and try to make the team this year so I can play.”

Nor was it the family’s first move.

Simmons was previously at Bourget College in Quebec, playing for a U-18 team.

However, COVID-19 forced the family to re-evaluate their situation.

“Players were all great but then Covid made me go back out west with my family because of the situation with my dad and everything,” Simmons said. 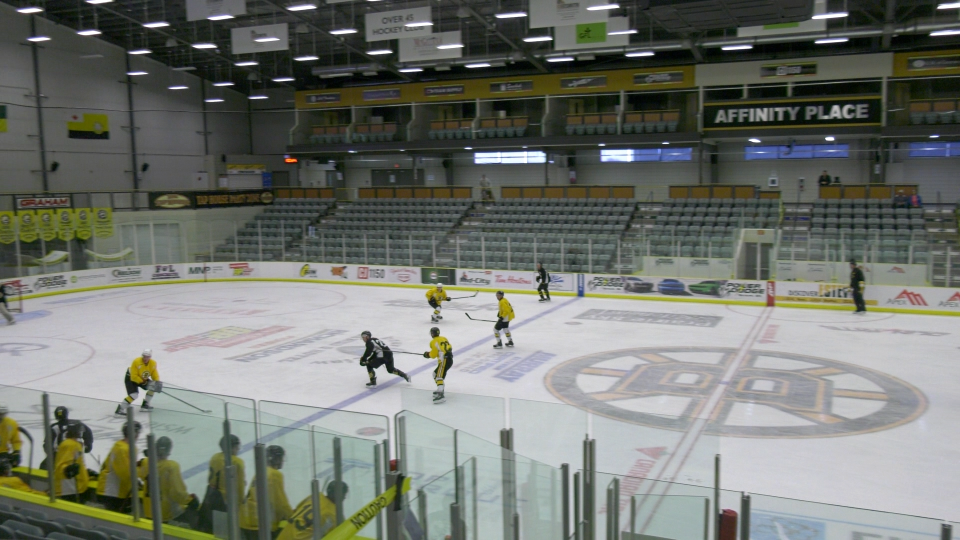 His father, Clay, has dermatomyositis and NSIP-fibrosis, a lung disease that puts him at a higher risk of fatality if he were to contract the coronavirus.

Tatarnic said he believes the family found the right fit with the Bruins.

“It’s a big commitment moving out here, but he’ll have the opportunity to play junior at 16,” Tatarnic said.

“If you’re a 16-year-old, you have to play, so he’s going to play way more games than he will be sitting up in the stands, because it’s important for his development,” Tatarnic noted.

In two years, Affinity Place will be hosting the Centennial Cup, the Junior A Hockey National Championship.

It’s part of the reason why the team is loading up on young talent now.

Besides Simmons, there are two 17-year-olds on the roster.

“We’re really gearing up for that championship and once everything gets back on track, we look forward to getting ready for that,” Tatarnic said.

The SJHL is still waiting for the go-ahead to play from the Government of Saskatchewan.