Unapologetically zero to 60 in a flash, that’s how Colleen LaRocque remembers her son, Mitchell Sveinbjornson.

LaRocque was 18-years-old when she gave birth to Sveinbjornson. A proud smile can be seen on LaRoque’s face when she recollects about her son, who today would be 31-years-old, particularly when speaking about Sveinbjornson's two children.

However, the father of two didn’t make it to 30.

In August 2020, Sveinbjornson and three of his friends picked up cocaine. To the best of LaRocque’s knowledge the four all went to bed just fine after a night of partying. Sveinbjornson was the only one that didn’t wake up that next morning.

LOOKING AT THE NUMBERS

Sveinbjornson is one of over 1,000 individuals in Saskatchewan who have died due to drug overdose since 2020.

According to the latest figures from the Saskatchewan Coroners Service, Saskatchewan has set records in drug toxicity deaths year-over-year, since it began publicly tracking figures in 2016. During the pandemic overdose deaths ballooned to heights never before seen — 326 in 2020, up from 179 in 2019, then 410 in 2021.

This year’s pace has slowed slightly, yet Saskatchewan has recorded 355 up until Oct. 31 of this year, on pace to set yet another record with 426 in 2022.

LaRocque’s story is unique to her and her family, but she knows she’s not alone.

Drug overdose deaths are occurring in all areas of the province, with 117 communities impacted. 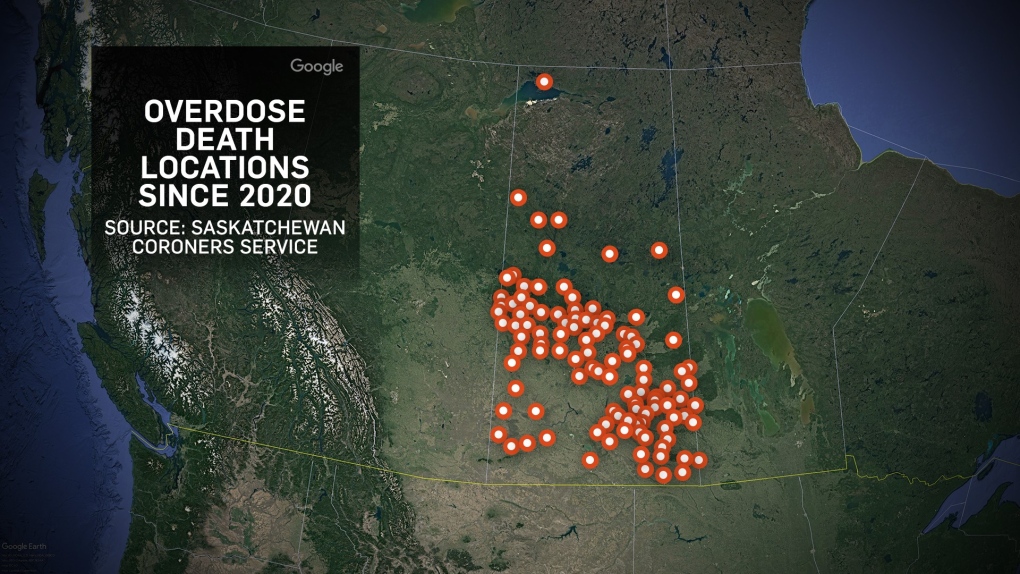 A map showing the location of overdose deaths in Saskatchewan since 2020. (Source: Google Earth)

The province’s two largest centers led the way with 406 deaths in Regina since 2020, along with 216 occurring in Saskatoon in the same period.

While 626 of the confirmed deaths did happen in the two large centers, the remaining 465 deaths are scattered across the province in communities of all sizes, as small as the village of Tantallon, which had an overdose death in 2020. Its population as of 2021 sits at 84.

“This crosses all lines of demographics right across the province geographically and for the people themselves,” Clive Weighill Chief Coroner of the Service said.

“The main cohort for males is in and around the 35 to 45-year-old range. These are people that were very productive previously. And got involved in drugs and spiraled.”

Weighill said the largest group data-wise for those dying due to drug overdose is Caucasian, but the Indigenous population is, “overrepresented for the size of their population,” he said.

Weighill said there’s one focus his teams have found. Those dying, are dying with multiple drugs in their system and not just a single substance consumed.

“Almost all the deaths we see,” he said.

On the toxicology reports LaRocque saw for Sveinbjornson, this was also the case.

“He went and bought cocaine. Cocaine was the last thing on the toxicology report. It was fentanyl, carfentanil, meth, all those other things cut in,” she said.

The mother said she doesn’t believe he would have bought drugs from someone he didn’t know. She described him as street-smart but admitted there were bumps along the way.

LaRocque described Sveinbjornson’s death as a shock to the family, as he was always looking to help out his siblings with their struggles with addiction. 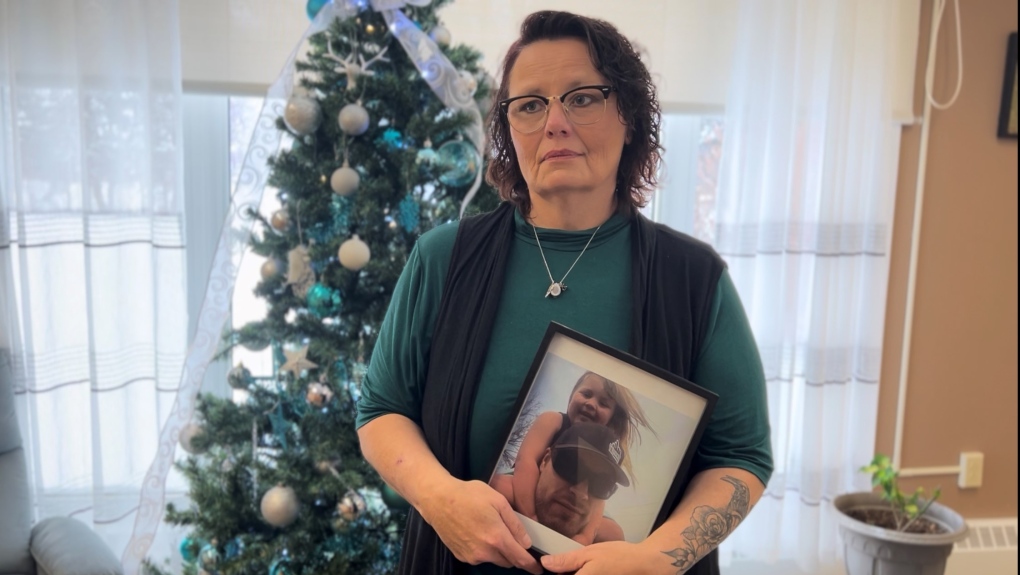 Colleen LaRocque holds a picture of her son with his daughter. (BradyLang/CTVNews)

“Somebody got a bad batch of something [the night Sveinbjornson died]. He’s the only one that passed, so either he got the brunt of it or did more,” she said.

Across Canada, overdose deaths increased by 91 per cent during the first two years of the pandemic compared to the two years before, based on a September 2022 study published by the Government of Canada.

That's 15,134 families affected and the reason for support networks such as Moms Stop the Harm, which helps "Canadian families impacted by substance-use-related harms and deaths," according to its website.

Marie Agioritis is the co-chair for the National Board of the organization and the Saskatchewan lead. Her son, Kelly died of an overdose in January 2015.

It was then, that Agioritis' life changed.

"From there, I became enraged. I couldn't understand why we didn't know, what we didn't know. Why there was no public outcry because I was seeing the numbers — I was looking at them going up," she said.

"There happened to be a lot of other mothers doing the same thing I was and we connected from there, this small group of women meeting in Kelowna in 2016 and we started the national organization," she said.

Agioritis said the original group of 12, "sadly," has grown to tens of thousands of allies and thousands of members across the country.

She said the over 1,000 deaths symbolize for her, "the one thing that has been a constant and continuation."

"The lack of effort to use evidence-based efforts to control this thing. It's so political so am I surprised by the numbers? Not at all," Agioritis said.

LaRocque is also a member of Moms Stop the Harm.

Agioritis said there isn't much structure in terms of aftercare for families grieving from the death of their children.

She said there's a "stigmatized relationship" with communities as well. Introducing Moms Stop the Harm gives those grieving someone to speak to that will understand them when it may feel like no one else around them can.

LaRocque dealt with this following the death of Sveinbjornson and even within the last week having to call out a parent whose child called her father an addict.

"It's unfortunate. It's still there. Your kids are always listening. Just choose your words wisely. They're there. These overdoses are somebody's parents, somebody's children, somebody's brother, somebody's sister and it hurts," she said.

For LaRocque, the 1,000-figure total symbolizes much more than the on-paper statistics.

"[It's] that too many of our kids are dying — This is stealing their lives. We shouldn't be losing our children this way," she said.

She said her family, which includes Sveinbjornson's two sisters and four brothers, still struggles with the loss.

"We make sure that we make him part of our holiday celebrations. We talk a lot with his kids about him. Never be afraid to talk about your kids, whether they're here or not. They need to, we need to remember them and they are people and they're important," she said.

Everett Hindley, the Saskatchewan Minister of Mental Health and Addictions, Seniors and Rural and Remote Health sent his condolences to the families of the 1,091 deaths.

"I think what is important to recognize is that these are family members. These are loved ones in each and every one of our communities. When a life is lost, that is tragic, regardless of where it happens and what occurs, but particularly when it comes to the overdose situation we're seeing here in Saskatchewan and abroad," he said Thursday, following the unveiling of the Overdose Outreach Team Pilot Project operating in Regina and Saskatoon.

The program will see teams including counsellors and paramedics following up with post-overdose patients. 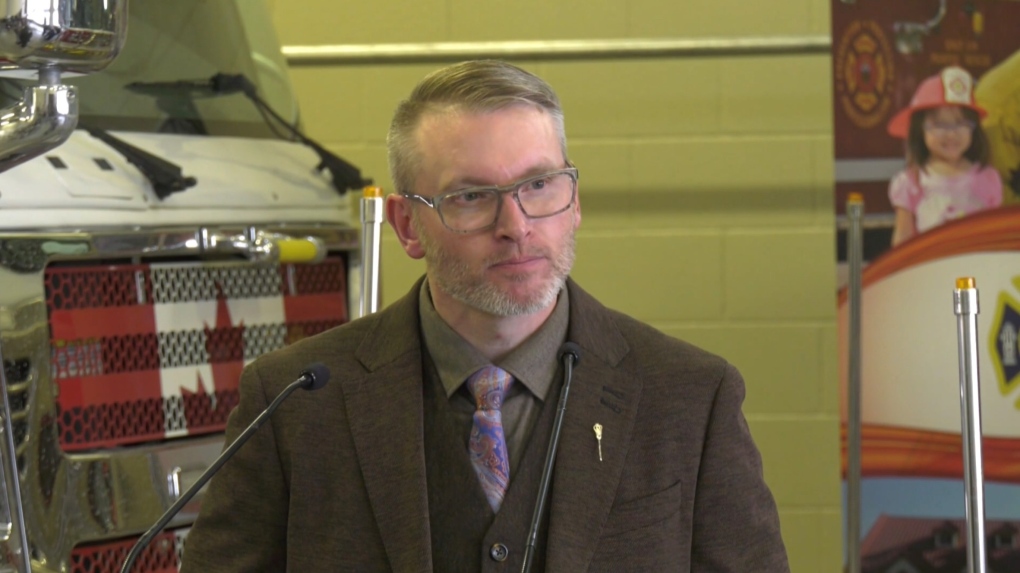 The provincial government has been heavily scrutinized in the past for not funding organizations such as Saskatoon's Prairie Harm Reduction, which is the province's first fully-operational safe consumption site.

Hindley said "a number of initiatives" will be launched to mitigate overdoses and overdose deaths.

"This is the latest in a series of announcements," he said, while pledging to make similar "important investments" and to engage with front-line service providers, those in the health care system and the users themselves in the future.

When asked about the future, and what can be done to mitigate the health crisis, Weighill said the numbers have fallen, which has him very optimistic.

However, he admits that could change, adding that more public education is helping.

“I think the more we know about it, the more we can think about it and hopefully come up with some solutions for it,” Weighill said.

Agioritis said with a new generation of more social thinking and creative political thinking, a shift is coming.

"The younger generation is seeing not just that we have to be better and kinder to people suffering, but we also really have to take a better and harder look at the cost of what we're doing and the way we're doing it now," she said.

In terms of government response, Agioritis said one thing is to become engaged enough and care enough to change the dialogue surrounding addictions.

"You want to change it so people in my peer group ... in that white collar, kind of blue-collar peer group, that they're understanding the real numbers that are being affected by this and it is their kids and that we need to care," she said.

LaRocque pointed to more detox and rehab beds and making them affordable and attainable for anyone looking for help.

On the anniversary of her son's death, LaRocque pays it forward to local businesses and she uses her platform as a voice in the community.

She carries naloxone wherever she goes and is a Provincial Volunteer First Responder.

There's one thing that keeps her going which has a special connection to her late Mitchell.

"I have two beautiful grandchildren that keep me going."

Biden says he gave the order for Chinese balloon shootdown

President Joe Biden said on Saturday that he ordered U.S. officials to shoot down the suspected Chinese spy balloon earlier this week and that national security leaders decided the best time for the operation was when it got over water.

How to stay safe in extreme cold: Recognizing the signs and symptoms of frostbite, hypothermia

Marit Stiles officially became the new leader of the Ontario NDP on Saturday after a majority of party members voted in favour of the lone candidate.

Eyes on the sky as Chinese balloon shot down over Atlantic

Eyes were locked on the skies Saturday as a suspected Chinese spy balloon passed over the U.S. Eastern Seaboard -- where local authorities warned civilians against taking potshots with rifles -- before it was shot down when it drifted over the Atlantic Ocean.

Dozens of Russian and Ukrainian prisoners of war have returned home following a prisoner swap, officials on both sides said Saturday.