More than 200 slithering snakes pulled out of home near Regina 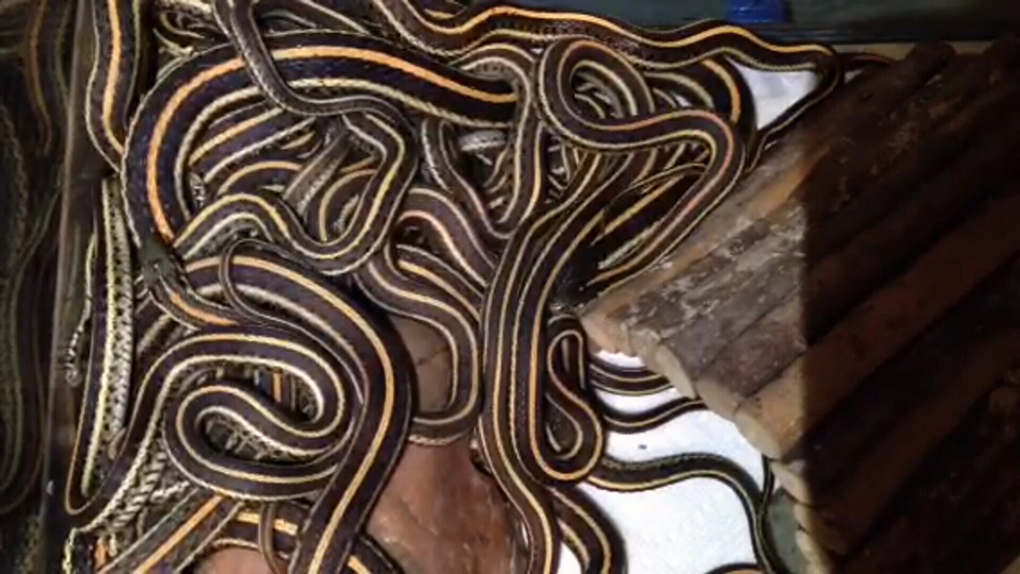 More than 200 snakes have been removed from a home near Regina.

More than 200 snakes have been removed from a home in Saskatchewan -- and there are still more slithering inside.

Megan Lawrence, director of the Salthaven West wildlife centre in Regina, was first called by the homeowners in early October.

They'd spotted a few harmless garter snakes over the years in their old farm house outside the capital city, and usually picked them up and tossed them outside. But this time they needed help catching more of the slithering serpents.

Most were tucked away in the basement, but some snakes had made their way upstairs into the kitchen and some bedrooms. Lawrence said Thursday that cranking up the heat caused many to leave their hiding places so they could be quickly captured.

"We had no idea there was that many, but we knew more were hiding in cracks in walls and under the floor."

A few days ago, the family delivered their latest "catch" to the centre in plastic bins with locking lids.

"There's actually still more they can see but they just haven't come out to be caught yet," Lawrence said.

She's not sure how many more could be in the house. Maybe five; maybe 105.

They are all plains garter snakes, the most common type of garter snake on the Prairies. Typically no bigger than a metre long, they are dark green with a stripe on each side and one down the back, varying in colour from bright yellow to dull red. They have teeth, but no fangs, and are quite docile. Lawrence said the homeowners have never been bitten.

Their house probably became a sanctuary for the snakes because cracks in its old foundation offered easy access. The cracks grew even wider after rain flooded the basement in the spring, and more snakes wiggled inside.

It's also probable the snakes bred while in the home and their population exploded, suggested Lawrence. Garter snakes have an average of 30 babies a litter, but can deliver as many 90.

The family, a couple and their two teenagers, are not really scared and find the snakes more of a nuisance than a threat, said Lawrence. But they don't want to be named or do interviews.

"They've asked to remain anonymous just so they can have friends and family still come over without fear."

The family is hoping to get the last of the snakes out of the basement soon, then quickly make repairs to the home's foundation so the slitherers won't be able to wriggle in again.

Lawrence said the first snakes, except for a few sick ones, were freed at a nearby nature preserve with known underground hibernation spots.

It's now too cold for the second batch to be put outside. Lawrence hopes other wildlife centres will offer some snake space. Otherwise, the remaining reptiles will stay at her centre for the winter, under heat lamps and eating earthworms and minnows.