The suspect at the centre of Saskatchewan's recent Amber Alert was arrested in South Dakota for a possible illegal border crossing and kidnapping, according to U.S. Customs and Border Protection (CBP).

Benjamin Martin Moore, 50, two children and their mother crossed into the United States illegally by driving through a barbed wire fence near the Turner Port of Entry in Montana, CBP said in a Thursday news release.

Following the discovery, RCMP assisted U.S. authorities with the identification of the suspect.

Moore was working campground security for the Sturgis Motorcycle Rally at a campground in South Dakota when police arrested him, according to campers.

Brian Lester and his wife were tenting at the Glencoe Camp Resort while attending the annual biker rally from Aug. 1 to 9.

Thirty yards from their site, Moore, along with his common-law spouse and her two children were camping out of their vehicle, he said.

All four of them were subjects in an Amber Alert issued by Saskatchewan RCMP on Monday evening. Although, Lester did not know that at the time.

Lester said he first noticed the kids Sunday when he woke up to the sound of them playing outside his tent, adding it is “very rare” to see children at the Glencoe campground during the rally, which raised a few red flags.

“Glencoe Campground is known for a pretty big adult party and it’s not a place where children belong,” he said.

“To have kids in a campground like this is not safe, it’s not right.” 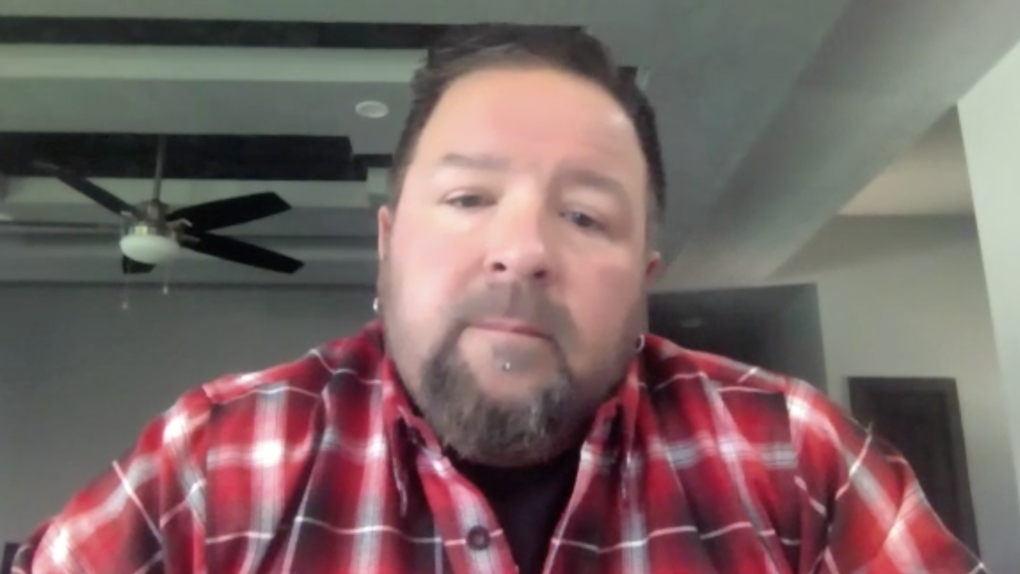 Brian Lester and his wife spotted four people who were the subject of a Saskatchewan Amber Alert at a campground in Sturgis, SD.

Lester said he and his wife reported the children to campground employees, adding they were worried about what the kids might be exposed to. However, they were told there was no age restriction in the campsites.

Lester then spoke with two security guards about his concerns, he said, one of them was Moore.

“[Moore] told me he was down from Canada. He is aware of the happenings of Glencoe campground and what kids should and should not see, which is why he chose to put the kids over in the tent area that is less populated,” he said.

Lester said he and his wife still felt off about the situation. They kept an eye on the mom and kids over the next two days, and noticed the family’s vehicle never left the campsite.

“They had toys and they were playing. The kids didn’t seem to be in distress,” he said

Lester and his wife left two days later, hours before the Amber Alert was extended into South Dakota Tuesday night.

Within 90 minutes of the alert being issued in the state, all four of them were located at a campground near Sturgis, SD, according to the South Dakota Department of Public Safety.

The two children are safe with U.S. officials and receiving supports and resources while they wait to return to Saskatchewan.

RCMP along with South Dakota Authorities and the U.S. Department of Homeland Security are performing their own investigations. Charges have yet to be laid in relation to the Amber Alert.

'SICK TO OUR STOMACH'

Lester and his wife noticed the Amber Alert on Wednesday morning. He said they recognized Moore and the kids right away. By then, the children had already been found, but the couple did not know that, yet.

“We felt sick to our stomach that we didn’t do more or pursue it harder,” Lester said.

“But to our knowledge they weren’t breaking the law.”

Lester’s wife immediately called police to report the children’s location, which is when they were told all four of them had been found.

The couple is “ecstatic” that the children are safe, but Lester still wonders if they could have been found sooner had security followed up on his concerns.

“Things happen for a reason. We’re also glad that we didn’t push it too hard that it scared them off,” he said. “It all worked out the way it should.”

Lester is hopeful that his original complaints to campground employees helped bring awareness to Moore and the children, which is why officials located them as quickly as they did.

CTV News reached out to the Glencoe Camp Resort. They would not comment on the Amber Alert.

However, in a Facebook post, campground officials said its security team played a role in apprehending Moore.

“We’d like to take a moment and recognize the great work of Glencoe’s 2022 Security Team for locating and assisting local law enforcement apprehending the Amber Alert suspect,” the post read.

“Our Chief of Security’s training and guidance of his staff possibly saved the lives of innocent victims.”

RCMP could not confirm if Moore was working as a security guard at the time of his arrest. They also would not speculate if that were the reason the four of them left the province and if they planned to return after the rally.

Canadians in Russia who hold dual citizenship should leave the country immediately or risk being conscripted for mandatory military service, the Government of Canada is warning.

Canada headed for 'severe' and 'inevitable' recession in 2023: economist

Canada is headed for a 'severe' and 'almost inevitable' recession in early 2023, according to the head of economics at Macquarie Group, which states Canada will face an approximately three per cent contraction in gross domestic product and a five per cent rise in its unemployment rate during the predicted recession.

Canadians reflect about residential schools on Truth and Reconciliation Day

Ceremonies, marches and other gatherings are taking place across the country Friday as communities mark the National Day of Truth and Reconciliation. The federal statutory holiday was established last year to remember children who died while being forced to attend residential schools, as well as those who survived, and the families and communities still affected by lasting trauma.

As Russia's war in Ukraine enters a flammable, even more dangerous phase, analysis from the Associated Press on CTVNews.ca looks at whether a wider war is looming with devastating results for the world, perhaps not seen since 1939-1945.

Russia vetoed a UN resolution Friday that would have condemned its referendums in four Ukrainian regions as illegal, declared them invalid and urged all countries not to recognize any annexation of the territory claimed by Moscow.

Exposure to air pollution increases the risk of COVID-19 hospitalization by up to 30 per cent for fully vaccinated patients, according to a new study.