REGINA -- Saskatchewan announced a seventh death related to COVID-19 on Wednesday, along with 21 new cases.

The province says the person who died was in their 60s and lived in the north region. They had tested positive for COVID-19.

“I’m sorry to announce that we’re announcing our seventh death in the province,” Dr. Saqib Shahab said at the province’s daily update on Wednesday. “We express our deepest condolences to the family of the person who died.”

He said the death serves as a reminder that “COVID-19 is very much in Saskatchewan.”

“Our hearts go out to the family and friends of this individual,” SHA CEO Scott Livingstone said. “This should continue to strengthen our resolve against this virus.”

Shahab said the province won’t disclose where the person who died was from.

“We feel that it is important, especially during times of hospitalization and death, we as a government and a health system, have to do our utmost to protect the privacy and confidentiality of people and families going through a difficult time.”

“There is no public health purpose in me disclosing the location of a death,” he added.

Of the new cases, 16 are in the far north region, including nine in La Loche and six in Beauval, four are in the north region and one is in the Saskatoon area.

This is the largest increase in new cases since May 6.

Shahab added the virus tends to have a larger affect on people who are older. He continued to warn about the possibility of secondary exposure from younger people to older people in the household. 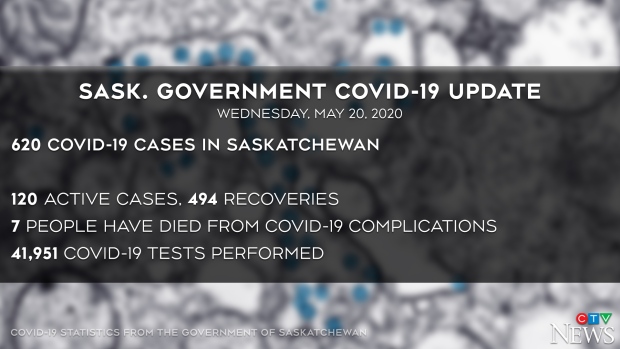 New case numbers dropped over the long weekend, including no new cases announced Monday for the first time in more than two months.

However, the number of new cases increased again on Wednesday.

“We continue to see ongoing transmission in the north and far north part of the province,” Shahab said.

Reopening is paused in the northwest region.

“I’m frankly not surprised by an increase in cases, especially in the far north and north where we’ve expanded our testing criteria,” Livingstone said.

He said fluctuating case numbers will likely be the case for months.

Saskatchewan is reporting 24 more recoveries from the virus, bringing the provincial total to 494.

Four people are currently in hospital across the province. All four are in Saskatoon, including three people in intensive care and one in inpatient care.

The far north region continues to lead the province in both total and active cases. There are 242 total cases in the area. Of those cases, 102 are considered active. 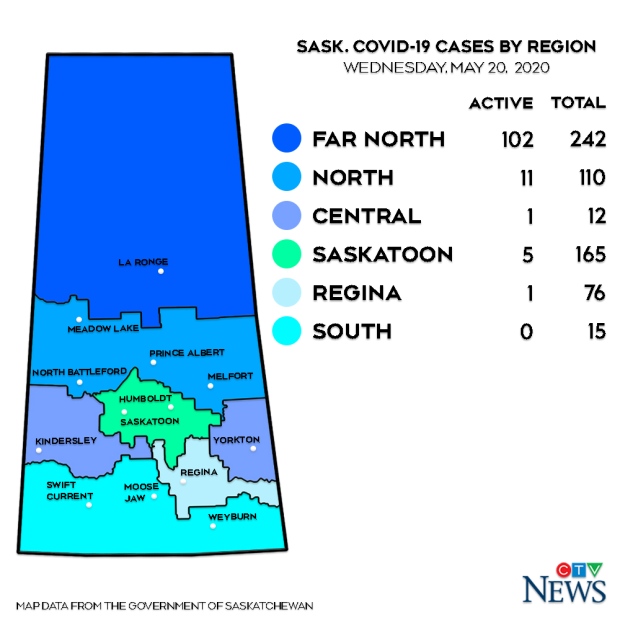 As for active cases, the north has 11, Saskatoon has five, Regina and the central region each have one and the south has no active cases.

Of the 620 cases in the province, 139 are related to travel, 339 are from community contacts, 71 have no known exposure and 71 other cases are under investigation.

Seven people have died from COVID-19 complications in Saskatchewan.

The province is reminding businesses reopening in phase one or two to make sure there are protective measures in place for employees and customers. The province says this includes personal protective equipment (PPE), physical distancing measures and increased cleaning protocols on commonly used surfaces.