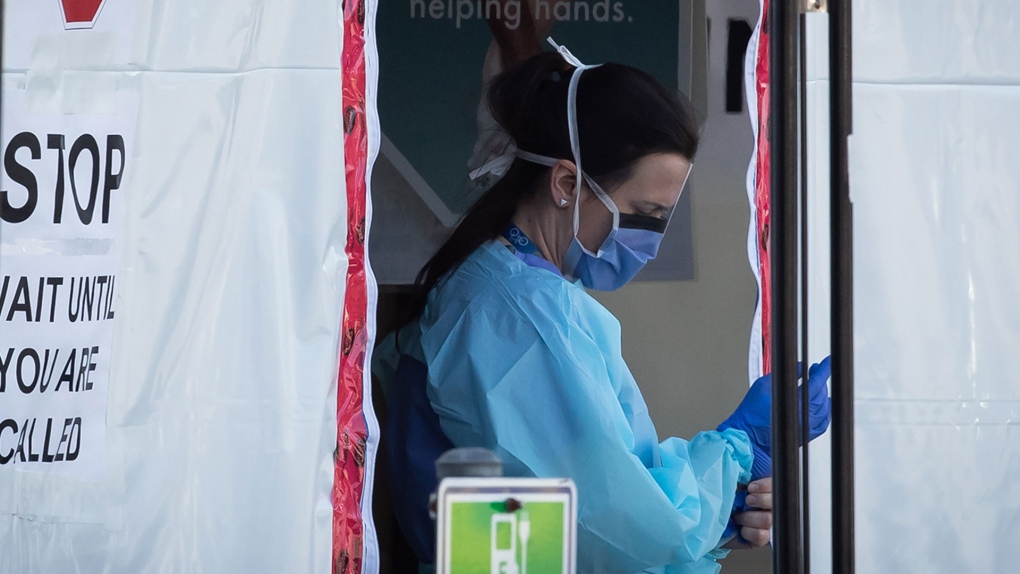 A hospital worker puts on gloves at a COVID-19 assessment centre for staff at Lions Gate Hospital, in North Vancouver, on Thursday, March 19, 2020. THE CANADIAN PRESS/Darryl Dyck

REGINA -- Saskatchewan is reporting five new cases of COVID-19, with the south and central regions remaining as hot spots.

The province said in a news release Sunday that there are 129 active cases. There have been 943 cases in total, with 799 recoveries.

The province said three cases that were reported as positive on July 11 are now considered negative, which has brought the total number down slightly.

As of Sunday, 12 people were reported to be in hospital, an increase of four people since Saturday, when eight people were admitted.

By region, four new cases are in the central area and one is in the Saskatoon area.

The Regina area saw no new cases, though there are currently seven active cases.

Fifteen deaths in the province have been related to COVID-19.

The province said there has been lots of testing over the past two days.

It said there have been 2,634 tests over the past two days, which are considered the two highest daily testing totals to date.

The majority of cases in the province (516) are community contacts, which includes mass gatherings. In addition, 183 cases are from travellers, 165 have no known exposures and 79 are under investigation.

With the increase in cases in the southwest and west central regions, the province is investigating how the virus has spread in these areas.

As well, it's figuring out which people may have been in contact with those who have COVID-19.

The Saskatchewan Health Authority has reported incidents where people may have been exposed to COVID-19 in Regina and Saskatoon.

As well, an employee who works at stores in Midtown Plaza in Saskatoon had tested positive for the virus.

The south and central regions of the province are considered the hot spots.

Businesses in Swift Current have been on alert after exposures of the virus were reported in multiple shops.

With the higher caseload, visits to some long-term care homes in the south and central regions have been restricted. As well, the government has limited visitation at the Cypress Regional Hospital.

The province has said it won't be imposing stricter measures, for now, on Hutterite colonies that have cases of COVID-19. However, there could be tougher measures should the situation worsen.