Cowessess First Nation says it has located 751 unmarked gravesites on the grounds of a former residential school.

The First Nation said the graves were found after a ground-penetrating radar search of the Marieval Indian Residential School site, which began June 2.

According to Delorme, in the 1960s there may have been headstones on the burial sites, but they were removed by Catholic Church representatives.

"Removing a headstone is a crime in this country. We are treating this like a crime scene at the moment."

Delorme said they cannot confirm that all of the graves are those of children, and added there are stories of adults being buried at the site, which became the community gravesite in the 1970s. 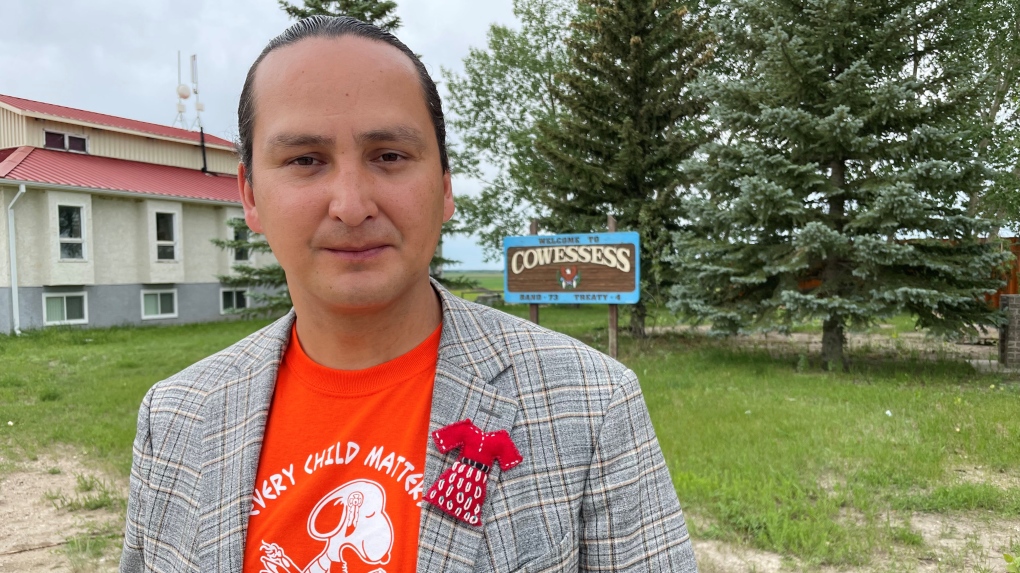 Delorme said the First Nation is now working towards putting names to the graves.

“All we ask of all of you listening, is that you stand by us as we heal and we get stronger. And that we must put down our ignorance and accidental racism of not addressing the truth that this country has with Indigenous people.”

The First Nation partnered with Saskatchewan Polytechnic to search the site with ground-penetrating radar.

According to Delorme, phase one of the search covered 44,000 square meters.

He said “quite a bit” of the burial sites were graves that are one metre by one metre.

Delorme said they were told there was a 10 to 15 per cent margin of error for the ground-penetrating radar machine, which means of the 751 current hits, the confirmed number will still be more than 600.

“We want to make sure that when we tell our story that we’re not trying to make numbers sound bigger than they are.”

The chief said each of the sites will be assessed by a technical team and verified in the coming weeks.

Delorme said it's believed there are additional unmarked burial sites located on the First Nation where unbaptized children, including babies, might be buried.

"If you weren't baptized – or if somebody had a baby that maybe was not old enough to be baptized – there was a strong Catholic belief at one time that you couldn't be buried in the gravesite," Delorme said.

He said the community hopes to locate the sites during a second phase of searching.\

The Federation of Sovereign Indigenous Nations (FSIN) is spearheading the effort to search for unmarked burial sites in Saskatchewan.

"The only crime we ever committed as children was being born Indigenous. A lot of work, a lot of healing will take place," FSIN Chief Bobby Cameron said during the virtual news conference.

The organization recently received over $6 million in provincial and federal funding to help with its efforts.

"We will do a search on every Indian residential school site and we won't stop there. We will also search all the sanatoriums Indian hospitals and all the sites where people were taken and abused, tortured neglected and murdered," Cameron said.

"We will tell the stories of our children, of our people who died who were killed by the state, by the churches."

The Marieval Indian Residential School closed in 1996 after operating for nearly 100 years.

According to information available through the University of Regina, the school was run by the Catholic Church until Cowessess First Nation took over operations in 1981.

The federal government had purchased the property in 1926. The school was “controversially demolished” in 1999, two years after it closed, and replaced with a day school.

OTHER DISCOVERIES IN SASK.

At the beginning of June, the Muskowekwan First Nation in Saskatchewan held a ceremony to honour the 215 children whose remains were found at a Kamloops residential school site and recognize the 35 unmarked graves found on the site of the Muscowequan Indian Residential School.

Through that process, along with water line construction done in the 1990s, the First Nation has identified at least 35 graves. It said there are likely more still waiting to be found.

The provincial and federal governments have both pledged money to help search residential school sites in Saskatchewan.

Fleeing shelling, hundreds of civilians on Saturday streamed out of the southern Ukrainian city whose recapture they had celebrated just weeks earlier.