It’s a remote Dene Nation in the far northeastern portion of Saskatchewan and more than 450 kilometres from the nearest urban centre of La Ronge. With limited access to transportation, high costs of living and spiking power bills, many people on Hatchet Lake feel they’ve been forgotten.

“We’re part of the province and also the country of Indigenous people,” Anne Robillard, CEO of Hatchet Lake Development, said. “We want to have access to the rest.”

The Hatchet Lake Dene Nation has a population of more than 1,500 people.

Need for an all-season road

For three decades, residents and leaders have been calling for an all-season road to connect their First Nation to Grid Road 905. For now, Hatchet Lake can only be accessed by plane. A round trip costs $1,100.

There is also an ice road allowing access to the area, but it’s only open five months a year.

“We need both the federal and provincial government to step up as partners by treaty and work with us to find solutions,” David Pratt, vice-chief of the Federation of Sovereign Indigenous Nations, said.

Construction of a 102-kilometre road to Hatchet Lake began in 2010. Fourteen kilometres were completed, but budget limitations shut down construction in 2011.

The First Nation has developed a three-year plan to finish the remaining 88 kilometres of the road. It will cost $88 million.

Community leaders say investing in the road will be positive for the province. They say the area is full of important resources for Saskatchewan. It would also help make the newly built fish plant create more employment. The plant is currently ready for market and has been shipping fish down to southern communities.

The province says the winter road represents the completion of the first phase of the project. The second phase would mean the road would be available 10 months a year. The third phase would complete an all-weather road available year-round.

“It’s a question of demands across the provincial transportation system. We do operate and maintain 26,000 kilometres of highway,” said Doug Wakabayashi with the Ministry of Highways and Infrastructure. “There’s currently an application for funding with the federal government. We’re just waiting to hear back from there.”

Indigenous and Northern Affairs Canada did not have a firm timeline for when the road might be constructed.

“The government is committed to a working partnership to improve essential physical infrastructure in First Nations communities,” INAC said in a written statement.

Limited access to the Dene Nation has drastically driven up the cost of living for people in the area.

A four-litre jug of milk costs more than $12 and a tub of margarine costs $11. Grocery prices are double or triple the cost of grocery stores in Saskatchewan cities.

Forest fires ripped through the area in 2015, destroying most of the natural vegetation — and the food source for caribou that used to come in the winter. The First Nation relied on those caribou for meat. Without them, Hatchet Lake had to purchase expensive meat packs for each household.

“It cost the band nearly $50,000 with transportation and everything else,” Tsannie said. “We don’t have the caribou around us like it was before, maybe due to the climate change or the ‘let it burn’ policy.”

‘You can’t throw them out’: limited housing leads to overcrowding

Overcrowded homes are common on Hatchet Lake. Pierre Kkaikka has lived there for most of his life. The 50-year-old lives in a three-bedroom, one-bathroom home with 17 other family members.

“I’m a busy man,” Kkaikka said. “I go hunting in the fall for moose hunting. When it’s caribou, I go hunting and when the ice is gone I go set nets.”

He’s one of the main providers for his family and his household.

One of the driving forces behind the housing shortage is the high cost of building materials. They’re expensive to ship to Hatchet Lake due to the lack of accessibility to the community. There are 237 homes for the 1,500 people who live there — and that population is growing. Ten new homes are currently under construction, but it’s not enough to match the area’s demand.

There are 22 people living in the Sha’Oulle family’s three-bedroom home. They’ve added an extra room beside the furnace and there’s a need for even more renovations.

“It’s OK before, when the kids were just the young girls,” Jonas Sha’Oulle said. “Now they have kids. The house is getting smaller, you can’t throw them out.”

“That’s not very healthy for the families,” Pratt said. “You can see when they’re breathing in black mould it leads to a lot of respiratory problems and illnesses. That’s close-quarter living, so that’s something we need to address.”

INAC said they have heard the community’s concerns about a lack of housing.

“Through the 2016 budget, (Hatchet Lake) received $1.5 million to build three duplexes,” INAC said in a written statement to CTV News. “That budget also provided the First Nation with $575,000 in renovation funding to address immediate pressures.”

The 2017 and 2018 federal budgets promised an additional $600 million to First Nations across the country over the next three years to develop a housing strategy. Indigenous Affairs wasn’t able to give a firm timeline of when that additional funding will reach Hatchet Lake.

“It’s sad when Canada is six on the UN Poverty Index. They’re in the top 10,” Pratt said. “But First Nations, when we’re measured by the same rates, whether it’s education, life expectancy and health outcomes, we’re number 63. So, it shows the amount of work we have to do.”

‘Where is your paycheque going to go?’: Power bills can cost hundreds or thousands of dollars

The Chief of Hatchet Lake said many people living in the community have to choose between electricity in their homes or feeding themselves and their families.

CTV News was given copies of power bill transactions for several residents on the First Nation. While some of the transactions look similar to bills in larger urban markets in the province, others are for hundreds or even thousands of dollars. One bill surpassed $9,000 for a month’s power supply. The bills are so high that many households choose to live without electricity in the summer so they can afford it in the winter.

SaskPower told CTV News that the $9,000 bill was a “meter read error.” The error has been fixed.

“We can’t keep up with our bills,” Sha’Oulle said. “We’ve got lots of bills to pay for me and my wife.”

“The three northern communities, Black Lake, Fond du Lac and Hatchet Lake, we pay the most,” Joseph Tsannie, vice chief of the Prince Albert Grand Council, said. “So, when people are working, they pay for SaskPower. Probably 80 per cent of their paycheque goes to SaskPower and what’s little left they have to pay the high grocery price at the store.”

The band office has to subsidize many of its members, since they don’t have the money to pay for the high cost of living in the area.

“The band (is) paying for this power bill,” Kkaikka said. “It’s over eight or nine (hundred) a month in this house here.”

When it comes to other high power bills, the Crown said people in the northern part of the province simply use more electricity.

“Rates are the same whether you live in northern Saskatchewan or the south,” Jordan Jackle with SaskPower said. “So, I think it’s addressing those consumption issues. There isn’t the natural gas infrastructure in many parts of northern Saskatchewan that you have in southern Saskatchewan. So, a lot of folks are relying on electric heat, which obviously would result in a higher power bill.”

SaskPower said it will work with customers to try and address outstanding bills. It added that it wouldn’t cut off power in the winter months.

While bills remain high, the First Nation is searching for new ways to power the community.

“We’re looking at other projects,” Joseph Tsannie said. “We’re looking at wind power; we’re trying to work with the system. We’re just not sitting back and waiting for someone to create these opportunities or help us.” 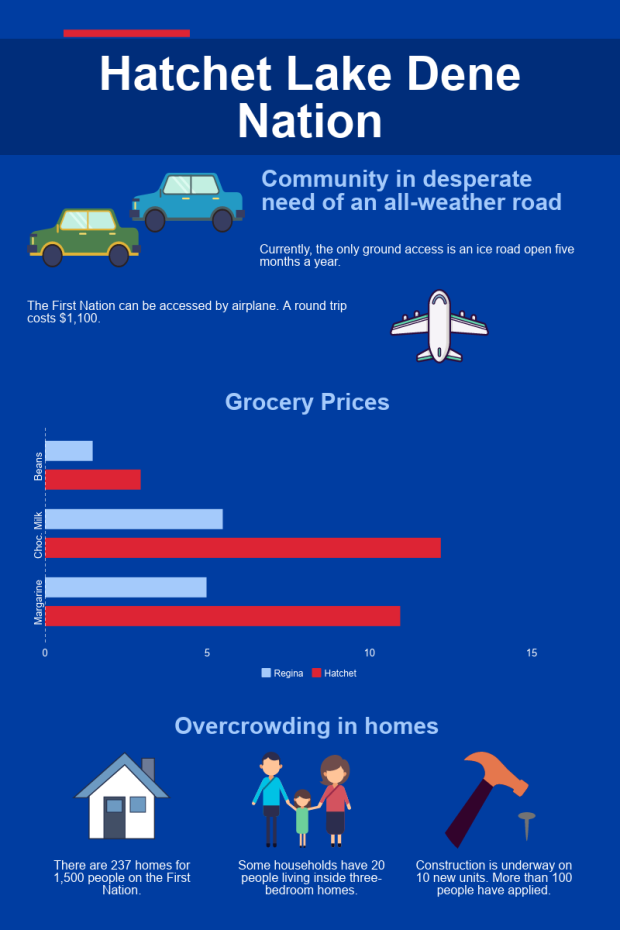