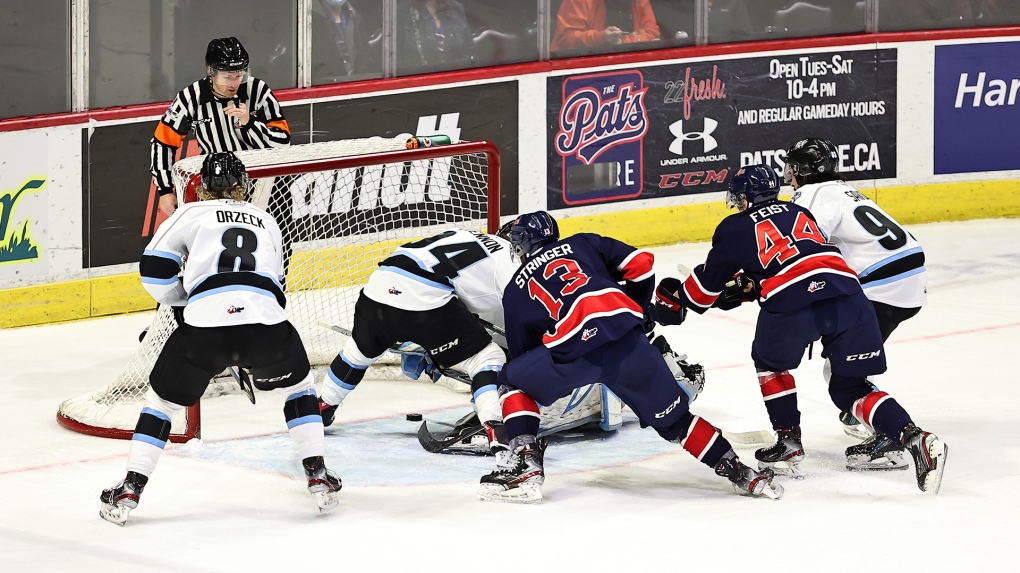 The Regina Pats lost 4-2 to the Winnipeg Ice at the Brandt Centre on Oct. 16, 2021 (Keith Hershmiller Photography/Regina Pats)
REGINA -

The Regina Pats extended their losing streak to four games, while a win helped the Moose Jaw warriors to an above .500 record.

TOO MANY MEN PENALTY LEADS TO PATS’ 4TH STRAIGHT LOSS

Despite an incredible effort from Pats goaltender Matthew Kieper, a costly too many men on the ice penalty early in the third period proved to be the team’s undoing.

It turned the tide of momentum back in favour of the Winnipeg Ice, who had been neutralized up until that point. Skyler Bruce scored on the man advantage beating Pats goaltender Matthew Kieper with a blast from the slot area to make it 3-2 in favour of the Ice.

“That one really stung to be honest with you,” Pats’ assistant coach Ken Schneider said. “That’s a real good power play, so to give up too many men was a tough way to lose the game, at the end of the day.”

It was the Pats’ fourth loss in a row, in a game where they knew they’d have to play near flawless hockey in order to have success. Winnipeg entered the contest with the best record in the Western Hockey League (4-0) allowing just six goals against and amassing an impressing 32 goals for.

“That’s playoff hockey against a really good hockey team. We played really good hockey, the way it’s supposed to be played,” said Pats' head coach Dave Struch. “We played the right way. It’s something these guys have to understand and believe because if we’re able to do this consistently, we’re going to win more than we lose. That’s what we’re asking our guys to do. They should feel good about their game, not good about the loss though.”

The Ice jumped out to a 2-0 lead on goals from Chase Bertholet and Mikey Milne in the first period. Milne’s fourth on the season was perhaps the game’s nicest goal. He fended off Pats defenceman Luke Bateman and moved the puck backhand to forehand with little room to work and beat Kieper on the forehand along the ice.

The Pats cut the deficit to one goal with 7:24 left in the first period. The shot from the left defender bounced off an Ice player and right to the stick of Borya Valis. The Colorado product fired a shot low blocker past Ice goaltender Gage Alexander for his first ever WHL goal to make it a 2-1 hockey game.

Pats goaltender Matthew Kieper brought fans to their feet moments later with a highlight reel save when he moved from right post to left and reached out with his glove hand, from his stomach to make a stunning save on a shot by Bertholet, who was looking for his second marker on the evening.

Stop what you're doing right now and look at this highway robbery from Matthew Kieper.

“They’re probably up there [as best saves of my career],” said Matthew Kieper after the game. “Just the way that they put their bodies on the line, help me out, it really means a lot and shows the kind of guys we have on this team.”

Later in the period, Kieper dove across his crease to lay the paddle down and make a second highlight reel save. He made 17 saves on 20 attempts, several of those from high percentage areas.

“Matthew gave us a chance there, they came at us hard, we weathered the storm,”

said Pats head coach Dave Struch. Praising the effort of his young goaltender and the team as a whole.

The Pats played a perfect second period in the minds of the coaching staff. It was a tight checking middle frame that yielded just a single goal. With a shade over two minutes to go, Cole Dubinsky’s shot went off the pad of Gage and Cole Carrier jumped on the juicy rebound to tie the game on the backhand.

A minor penalty assessed to the Pats for too many men on the ice just 2:25 into the final period was where the tide turned. With Zack Stringer in the penalty box, Skyler Bruce netted his fourth of the year thanks to a nice pass from Owen Pedersen. Matthew Savoie drew the other assist on the go-ahead goal.

Pedersen would later score into an empty net to seal the victory with 19 seconds remaining giving the Ice a 4-2 win.

At times, the Pats budding young superstar, Connor Bedard appeared frustrated. The 16 year-old had a number of scoring chances but could not connect. Despite being kept off the scoreboard, his head coach praised his efforts after the game.

“If [Bedard] goes back and watches his game, 200 feet, it’s the best game he’s played all year. Hands down. His hockey IQ, for what we’re trying to coach and teach him, was absolutely remarkable tonight,” Struch said. “The blocking shots, the stick lifts at the end, if he wants to play in the NHL, those are things he’s going to have to do, and he did that tonight. He’s finding ways to contribute at an elite level.”

The Pats now have a 2-4-0-0 record. They travel to Winnipeg for a rematch Saturday night with the Ice.

After falling behind early on an impressive individual effort from Raiders forward and San Jose Sharks prospect Ozzy Wiesblatt, the Warriors battled their way back.

Wiesblatt scored short-handed, picking up a clearing attempt off the glass and outpacing Warriors captain Daemon Hunt, charging into the Warriors zone, around the goal and tucking the puck into the net past an outstretched Carl Tatachuk.

The Warriors had reason to be frustrated. With just under 11 and a half minutes remaining in the first, Jagger Firkus pounced on a puck in the slot and beat Raiders goaltender Carter Serhyenko with a beautiful high blocker blast. The celebration was quickly muted as the referee ruled the net was off its mooring. The team used that adversity to fuel their offence.

Prervov, Czech Republic product and Columbus Blue Jackets prospect Martin Rysavy scored his first Western Hockey League goal midway through the second period. Rysavy took the pass from Ryder Korczak on the backhand, quickly transitioned the puck to the forehand and snapped a shot low blocker, past Warriors netminder Carl Tetachuk to even the score at one.

Warriors star 16 year-old Brayden Yager scored his fourth of the season with 7:42 remaining in the third period which stood up as the game winner. The Warriors also got goals from Korczak and Denton Mateychuk to pad their lead.

Tetachuk made 13 stops on 14 raiders shots on goal. Serhyenko stopped 29 of 33 Warriors’ attempts.

The Warriors are back in action on Saturday night when they host the Saskatoon Blades at Mosaic Place. Opening face-off is scheduled for 7 p.m.