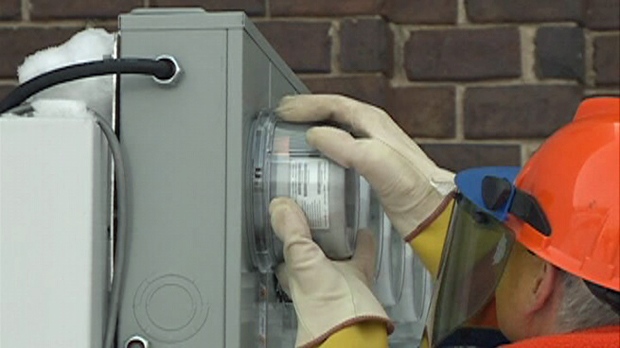 A smart meter is installed at a home in this file photo.

Saskatchewan's Opposition says the Crown utility needs to act more quickly to remove smart meters from homes in light of another problem with the devices last week.

Last summer, the province ordered SaskPower to remove more than 100,000 newer models that had already been installed after reports of at least eight fires related to the equipment.

On Friday, a ninth meter overheated and melted in Regina.

"It's of great concern that there are thousands of these meters on homes of Saskatchewan families," he said. "The risks are real.

"It's just not believable that the government is making this the priority they should," he said, adding that the replacement needs to occur "much more urgently."

The government has said SaskPower is moving as quickly as possible and people who are concerned can request to be placed on a priority list.

SaskPower plans to have all the meters removed by March 15.

On Friday, SaskPower spokesman Tyler Hopson said the utility is ahead of schedule.

"We're working to make the situation right and get a fresh start on smart meters," he said.

Saskatchewan's Crown Investment Corp. was directed to do a review after fires were reported last summer. The investigation results found that rain water and contaminants getting into the meters appeared to contribute to them failing.

"In various parts of the province, eight meters failed catastrophically, melting or burning and in some cases damaging the sides of houses," the report said. The failures were not related to "hot sockets" or installation issues, it said.

The report also said SaskPower failed to look at the possibility that the meters could short out and catch fire.

It said the utility looked at 359 returns and found 18 smart meters were burned and no longer operational. Three more had high temperature errors, while 107 had display problems and 67 showed error codes.

The Opposition has been criticizing the government for its response to the safety issues and is calling for the resignation of Economy Minister Bill Boyd, who is also the minister responsible for SaskPower.

The CEO and president of SaskPower, Robert Watson, resigned in wake of the issue. Boyd said Watson has taken responsibility for the project's shortfalls.

The problems in Saskatchewan prompted officials in Medicine Hat, Alta., to suspend installation of electricity smart meters in August. A spokesman for the city said there had been no reported problems.

In Ontario, smart meters have been linked to 23 reports to Ontario's fire marshal between 2011 and 2013, including 13 small fires. Karen Cormier, a spokeswoman for the Ontario Energy Board, has said that 36 of 77 utilities in Ontario use smart meters from Sensus, but none is the model used in Saskatchewan.