Thousands walked up and down the midway taking in the first day of the Queen City Exhibition (QCX) on Wednesday.

“It’s a bit of a rite of passage for the summer months,” said Tim Reid, Regina Exhibition Association Ltd. (REAL) president and CEO.

This year’s fair is returning to its regular five-day event after cancelling all operations in 2020 and running a two-part eight-day fair in 2021.

Ticket presales were up about 14 per cent compared to 2019, according to Reid.

“Our sense is cross-the-country fairs are returning to 2019 levels, but the actual spending at the fairs is significantly up,” he said, adding fairgoers are spending anywhere from 20 to 30 per cent more than previous years.

Reid said the food, rides, and concerts are going to be the big attractions.

“I think Thursday night with Jason Derulo will be the largest artist that we’ve probably put on stage at the Queen City Ex,” he said.

The midway has more than 55 rides. New this year is the Raptor Run, a family-friendly ride in the kids’ area. 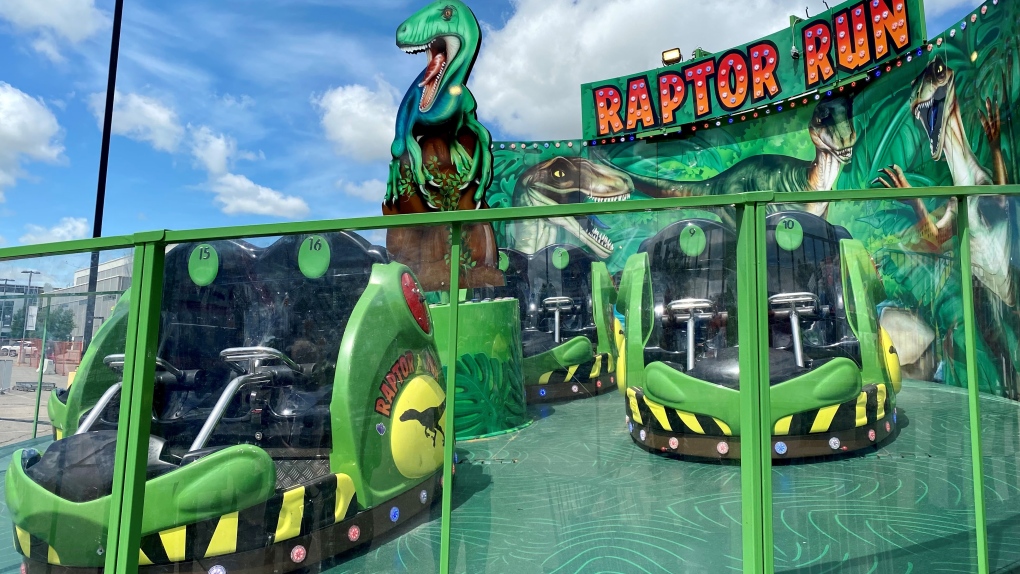 The Raptor Run is new to the QCX this year and one of more than 55 rides on the midway. (Allison Bamford / CTV News)

“It’s been popular wherever we’ve had it,” said Scooter Korek, VP of client services for North American Midway Entertainment. “We brought back all of our favourites. The Crazy Mouse Roller Coaster, of course. There’s no way we could come without the Zipper.”

From mac and cheese soft serve ice cream to Oreo fried rice, Reid said there is something for all taste buds to try at this year’s QCX.

Wok This Way is the food vendor behind the coconut milk rice and crushed Oreo combination.

“We thought we’d try something different,” Dorothy Au said. “A fan-favourite is always been fried rice and as you can see at the fair there is always Oreos so we thought we’d do a quick twist and combine the two.” 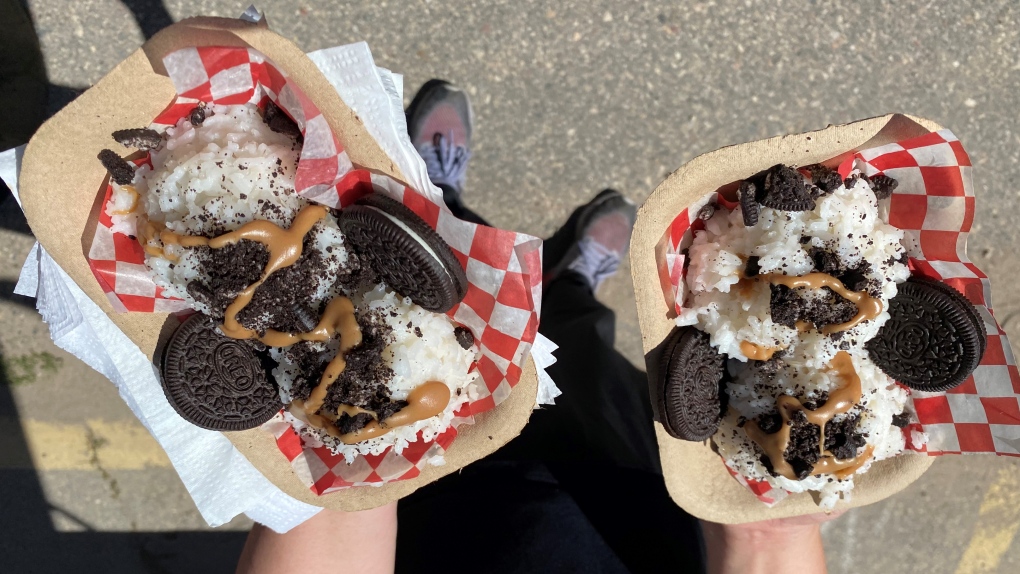 “It’s half cheese, half wiener and then we cut the wiener at the end to flare it out to make it look like squid.” 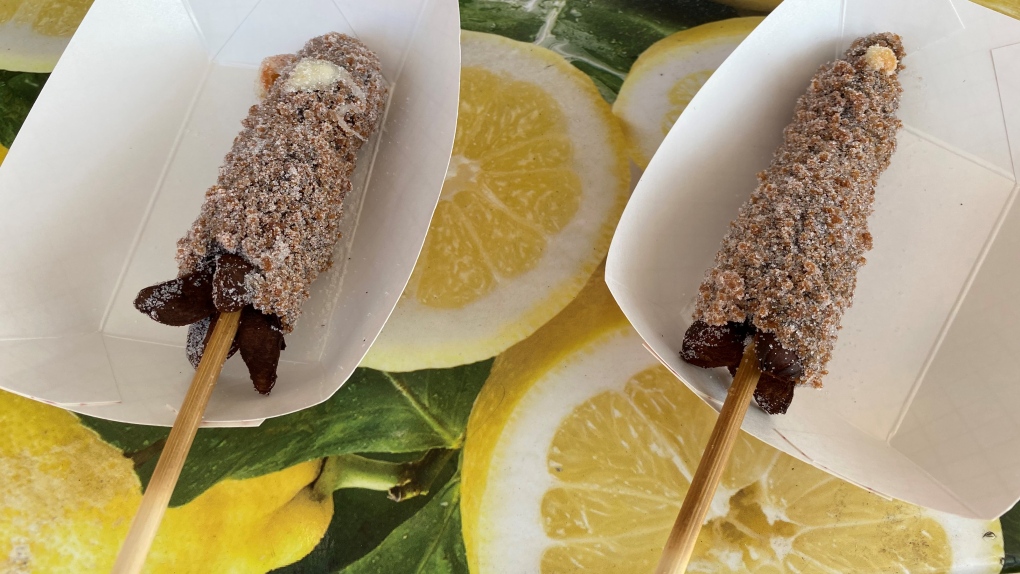 Korean corndogs are dipped in a black squid ink batter, fried and then coated in sugar. (Allison Bamford / CTV News)

Sarah La works at the Melt Town Grilled Cheese food truck. Her staple this year is the donut grilled cheese filled with pulled-pork.

“When you go to a fair, what is a staple food you always go home with? Mini donuts. So we wanted to figure out a way to incorporate donuts into our menu and that’s how we got the donut grilled cheese,” said La.

“It’s sweet and savory. The pulled pork offsets the sweetness of the glaze.” 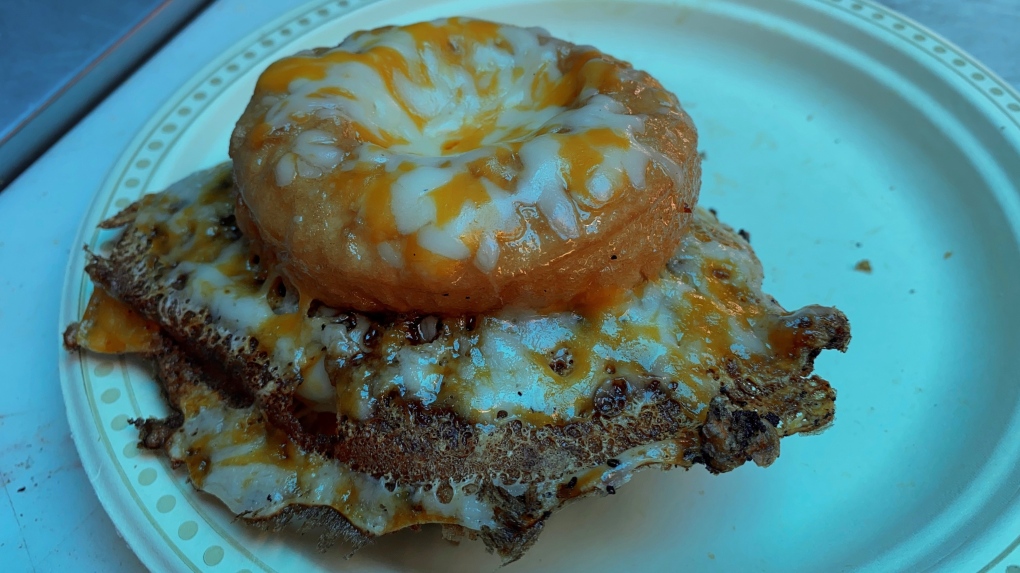 There are 60 food vendors with 34 new menu items this year.

While there is plenty of food to choose from, Reid will be sticking to the mini donuts on Friday evening when he and other local celebrities take on competitive eater Joey Chestnut.

The mini donut eating competition is a fundraiser for the Regina Food Bank with the goal of raising 60,000 meals.

“I’m excited to participate. I’m terrified to watch (Joey Chestnut) eat hundreds of mini donuts but I think if the community can support us and we can continue to raise some funds, the impact will change the opportunities for some of the most vulnerable in the city,” Reid said.