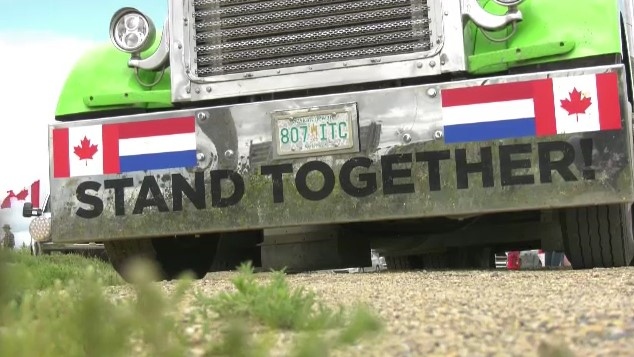 Hundreds gathered for a slow roll protest from Moose Jaw to Regina. Demonstrators explained that the action was being in solidarity with Dutch farmers protesting agricutlural policies. (David Prisciak/CTV News)

Hundreds of demonstrators in dozens of vehicles were present on Highway 1 between Moose Jaw and Regina on Saturday, staging a “slow roll” protest in solidarity with Dutch farmers.

Protests in the Netherlands have persisted due to environmental regulations mandated by the Dutch government.

Efforts to reduce emissions of nitrogen oxide and ammonia, which are essential in the manufacturing of synthetic fertilizer, have been condemned by some Dutch producers.

The outskirts of Moose Jaw were host to many Dutch and Canadian flags Saturday afternoon, as protestors convened before slowly setting off to the Queen City.

One of the demonstrators, Mark Friesen, said the event was a gesture of solidarity to those protesting in the Netherlands and a message to the federal government.

“So we have to do something, we have to stand in support of Dutch farmers, and our own farmers,” said Friesen.

“[To] ensure that the government in Ottawa is paying attention and they understand that if they go any further with this, they're gonna have to deal with us.”

Friesen previously ran in the Saskatoon-Grasswood riding for the People's Party of Canada and has been a prominent critic of public health measures during the COVID-19 pandemic.

He and others at the event believed that if similar regulations were put into place in Canada, the effect on farming operations in Saskatchewan and other provinces would be immense.

“They're looking at a 30 per cent reduction in nitrogen fertilizer ... if it's going to decimate the smaller farms throughout Europe, it's gonna really decimate the big farms here in Saskatchewan, Alberta, Manitoba, and even lower mainland in B.C., and of course Ontario farmers as well,” Friesen said.

The demonstration ended with the convoy of vehicles entering Regina and travelling north on Albert Street late Saturday afternoon.