'People are doing the best they can:' Increase in COVID-19 cases concern rural communities

REGINA -- Residents of some rural municipalities in Saskatchewan are concerned about the rise of COVID-19 in their communities, hoping safety measures will keep the virus at bay.

Their concerns come after Saskatchewan reported 56 new cases in the span of three days. The bulk of those cases are in rural areas, with 31 in the central region and 15 in the south.

“I think it’s concerning for everyone when we see these increases, especially with the due diligence that has been happening,” said Jeanne-Marie de Moissac, the reeve of the R.M. of Biggar.

“People have been travelling around more now, and people are moving throughout the province, so I don’t think the rise in cases was unexpected,” she said.

The province listed Biggar, as well as a number of other rural municipalities, as places affected by COVID-19.

In the R.M. of Newcombe, which was also listed, local officials decided to again close the office after case numbers increased.

“Obviously we’ve had concerns since this all started, but as of yesterday, we’ve decided to take more precautions,” said Ken McBride, the reeve of Newcombe. 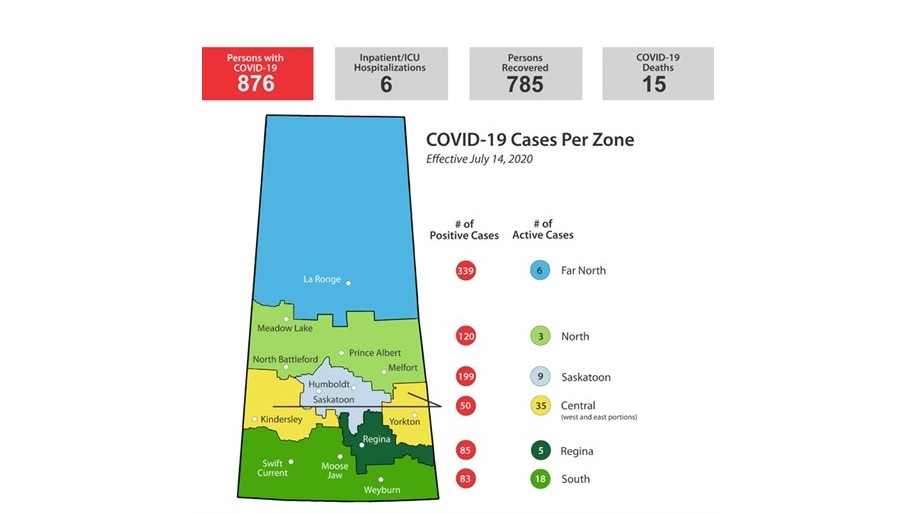 Some rural municipalities wish the government provided more details about the case numbers.

Some would like to know how many cases are specifically in their communities so they can better prepare. All that was provided was a list of impacted rural municipalities.

“We’re sitting here in limbo not knowing where these cases are,” said Adrienne Urban, the administrator for the R.M. of Harris. “The problem with not knowing is it can lead to more panic, but people are doing their best.”

As well, it would have been nice if the Saskatchewan Health Authority (SHA) gave communities the heads up, said Charlotte Helfrich, the administrator for the R.M. of Prairiedale.

She said there is speculation the cases are tied to some neighbouring Hutterite colonies, though the exact colonies haven’t been identified.

The province has said it’s working with the Hutterian Safety Council to address the situation, given the bulk of cases are among people living in communal settings.

“Public health should have phoned and let us know so we could have got the information out beforehand,” she said.

McBride said he understands people want their privacy protected, but a notification would have been helpful.

“I realize there has to be some protection for people, but I think that information should have been sent out to the affected RMs as soon as possible,” he said.

Chief Medical Health Officer Dr. Saqib Shahab said on Tuesday the government reports location information on a case-by-case basis. It depends on whether cases are linked to multiple communities, within households or are a larger outbreak.

Scott Livingstone, the CEO of SHA, said health officials have been working with colonies, providing them with supports and doing lots of testing.

There is no indication the cases are linked to a large funeral gathering in Alberta, Shahab said.

Despite the increases, people in the impacted small communities will continue to practice safety.

“People are doing the very best they can,” she said. “We are writing this book as we go along.”

She said she’s worried about how the province will address the pandemic when school resumes.

As well, she hopes people stay in touch with seniors. Many of them have been extremely lonely, she said.

“They are so valuable and such a precious part of the fabric of our world here,” she said. “They’re lonely and I think many are depressed, not only because of the isolation, but with the reductions in services.”