This undated electron microscope image made available by the U.S. National Institutes of Health in February 2020 shows the Novel Coronavirus SARS-CoV-2. Also known as 2019-nCoV, the virus causes COVID-19. The sample was isolated from a patient in the U.S. (NIAID-RML via AP)

REGINA -- For the second time this week, the province of Saskatchewan is only reporting one new COVID-19 case.

The new case brings the provincial total to 305 cases as of Thursday. Eighty-two cases are active.

Saskatchewan is also reporting 14 new recoveries, for 219 total recoveries in the province.

There are seven people in hospital. No one is in the ICU. 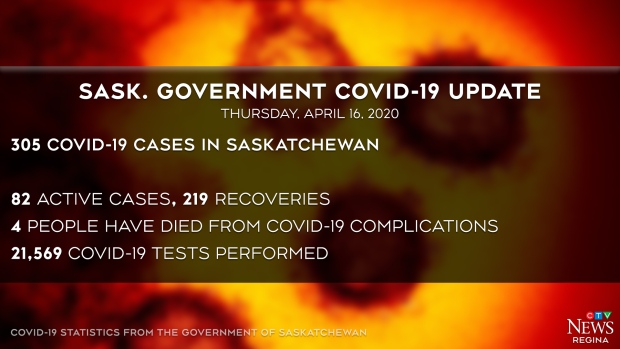 Premier Scott Moe said Monday that if case numbers remain low, he will release a plan to re-open the province’s economy next week.

However, he said Wednesday that certain guidelines like limiting unnecessary travel, self-isolating after international travel and limiting large gatherings will likely remain in place for a while.

The province says 34 of the cases are in health-care workers, but said the source of infection may not be related to their work in the health-care field. The province’s chief medical health officer says at least 11 of those reported cases were from a curling bonspiel in Alberta.

To date, Saskatchewan has performed 21,569 COVID-19 tests. The province has the second-highest testing rate per capita in the country. Moe says he hopes to reach 1,500 tests a day by the end of the month.

The province also said Thursday that anyone who needs emergency or non-urgent medical care during the pandemic should still seek treatment. Emergency rooms and family doctors are still operating in Saskatchewan. Most offices have video and phone consultations available for non-emergent services.