'It shows a lack of respect': CFL players upset with lack of communication from league 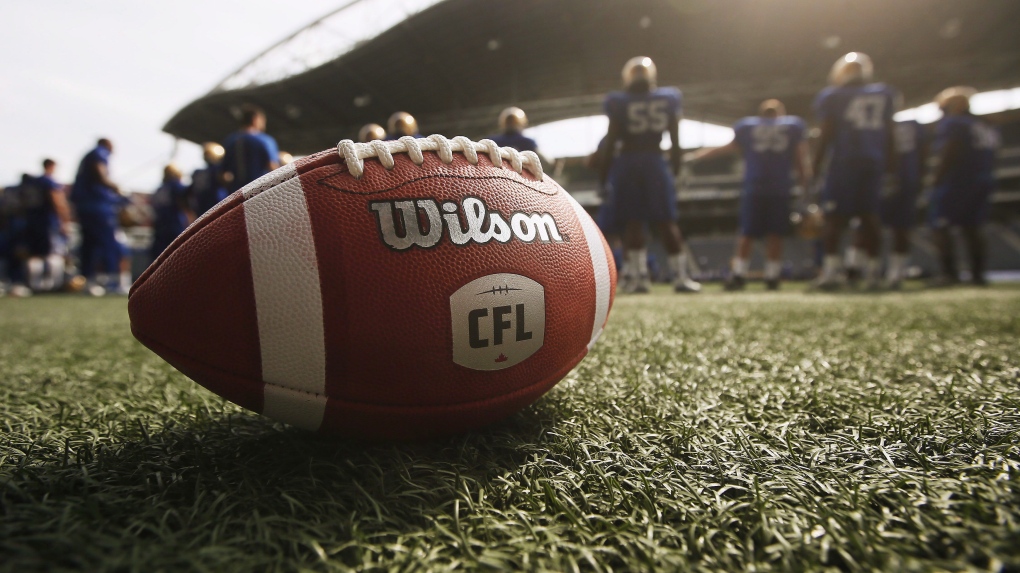 The CFL makes its return to Atlantic Canada Sunday for the first time since 2013 with a key matchup featuring one of the league's marquis rivalries. A CFL ball is photographed at the Winnipeg Blue Bomber stadium in Winnipeg, Thursday, May 24, 2018. (THE CANADIAN PRESS/John Woods)

REGINA -- The CFL Players Association (CFLPA) still hasn’t received a proposed collective bargaining agreement (CBA) from the CFL for the 2020 season, in the wake of the COVID-19 pandemic.

For the second time in recent months, the CFLPA is upset with the league, after it asked the government for funding without consulting the players.

“[The CFL] routinely makes unilateral decision that affect our livelihoods, health and safety. We are not going to quietly sit back and allow that to happen,” Solomon Elimimian, the president of the CFLPA said in a statement to CTV News.

“It shows a lack of respect. The players have said for the last three months we want nothing more than to work with the league and have a 2020 CFL season,” says Brett Lauther, a member of the CFLPA.

TSN football insider Farhan Lalji says there was an early concern that the league did not want to play and was trying to posture. Now he believes the CFL is legitimately working towards playing in September, but the rift between the two parties could hamper things.

“The leagues’ decision to play is going to be based on economic models around return to play and the CBA,” Lalji said. “So it’s going to be a difficult situation if they come up with a solution and they say to the players, ‘here we go’, as oppose to the players being apart of the process.”

Players should have been paid this past weekend in conjunction with the first regular season games. If the proposed CBA doesn’t fit their needs, the players might refuse the agreement.

“It might make sense for us to just wait and play again next year under the old CBA,” says Lauther. “It’s increasingly tough for players to swallow the pill that we’re the only ones not being paid.”

There are rumours management across the league have taken pay cuts, according to Lauther. However players are angry, speaking out on twitter about their concerns.

.@CFL @CFLPA @RandyAmbrosie can we please get a set date on when a decision will be made? I got kids Mann

Hey @cfl any news on our lives, dreams, and careers that you have held hostage from us knowing?? Asking for a friend...

Elimimian says they are “running out of time to work through these critical issues. The league appears unable to reach a decision, and show us enough respect to include us in their deliberations.”

Players have permission to use CFL training facilities, including 10 eligible Riders in Regina. But Lauther says due to the pandemic, the CFLPA has made alternative suggestions.

“We were kind of recommended from the [player’s association] side of things that we shouldn’t have to go back to the stadiums when we don’t know for sure what’s happening with the COVID-19.”

The US-Canada border will remain closed until at least July 21st, meaning players may have issues getting to Canada for training camp in August. Lalji speculates similar to the NHL, players would receive an exemption, possible in the form of a work visa.