These parents are advocating for breast milk donations on Mother's Day

REGINA -- This Mother’s Day, some parents are aiming to raise awareness about the importance of breast milk donation for babies who can’t receive it from their birth moms.

For Rustie Sobchuk, a mother of two, breastfeeding her boys has been a major part of parenting.

“It’s such a special bond when you nurse your baby,” Sobchuk said.

But when her nephew was in the NICU and was relying on donated breast milk, she decided to become a donor herself.

NorthernStar Mothers Milk Bank is used by the Saskatchewan Health Authority, and that’s where Sobchuk donated.

According to their website, the donation process screens breastfeeding women and accepts excess milk from approved donors. After the milk is pasteurized in a lab, it’s then given to babies who need it either in the hospital or at home. 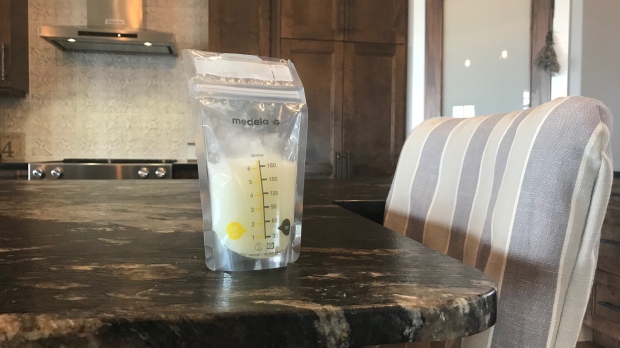 “To be able to donate breast milk so that I know another mom can just sit there, relax and be able to give their baby breast milk and feel that reward is pretty nice,” she said.

Nathan Chan, a single dad by choice who has a two-year-old daughter through surrogacy, has launched a campaign called Breast Milk Hero.

His goal is to raise awareness across Canada about just how important breast milk donation is.

It resonates with him deeply because it’s how he feeds his daughter, Nanette.

“I have this village of women who are selflessly giving me their breast milk and it’s a very beautiful gift,” Chan said. “It just represents this love that I’m able to share.”

The 50 bags represent the 50 women who have donated milk to him.

“It just represents how much there is a willingness to help one another,” Chan said.

“I’ve heard so many moms say ‘yeah, I had a freezer full but I didn’t know what to do so I just dumped it,’ and that’s really sad because there’s a lot of moms that would happily take that breast milk,” she said.

She said the process shouldn’t deter anyone from donating, because for her it’s been simple.

“They make it very smooth and easy because they know that if you’re pregnant and expecting, there’s a lot going on,” Sawchuk said.

Anyone who is interested in becoming a donor can start the screening process with a call to NorthernStar Mothers Milk Bank.