‘We were chosen to do this job’: Broncos alternate captain ready for leadership role 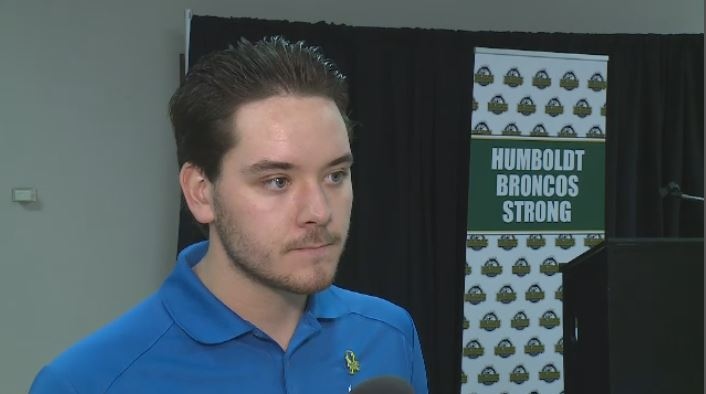 Newly appointed alternate captain Michael Clarke is ready to step into a leadership role for the Humboldt Broncos this season.

Clarke will wear the A along with crash survivors Brayden Camrud and Derek Patter.

“I wanted to be a leader this year,” Clarke told CTV News on Tuesday ahead of the team’s Wednesday home opener.

“I know where those younger guys are coming in, especially on a year like this with what was happened, and for me personally it was a big thing to get a letter. I want to try to represent the Broncos, as well as the city, as best I can.

“We were chosen to do this job and that’s what we’re going to have to do.”

The 20-year-old forward was traded to the Broncos from the Calgary Canucks in June. In his fifth year of Junior A hockey, he wants to be a mentor for young players heading into a pressure-filled season.

On Wednesday night, the Broncos will take on the Nipawin Hawks at Elgar Petersen Arena in front of a sold out crowd in their home opener.

It’s the first regular season game for the team since the fatal bus crash on April 6.

Clarke said the team has developed strong bonds since they started skating together last month.

“The world wants to hear what we’re doing. As much as we want to put that out there, we’ve also got the young guys. We’ve developed a tight-knit group.”

While there might be worldwide attention on them on the ice, Clarke says it’s important to the team to leave that at the dressing room door — which is a space only for the team.

“We’re here to play hockey, represent the Broncos, and be great hockey players and great people,” he said.

The team will hold a moment of silence before puck drop and a full tribute to the crash victims will play once the game wraps up. Clarke said the timing will help all the players focus on the game.

“Once the game starts, it’s very hard to try and play and focus on it,” he said. “So, I think as the game’s coming down, we’ll be so into the game that we’re just going to play hockey.”

“After the game is over, that’s when emotions are going to set in and it’s going to be a very sad time.”

The game will air on CTV Saskatchewan and TSN on Wednesday night.