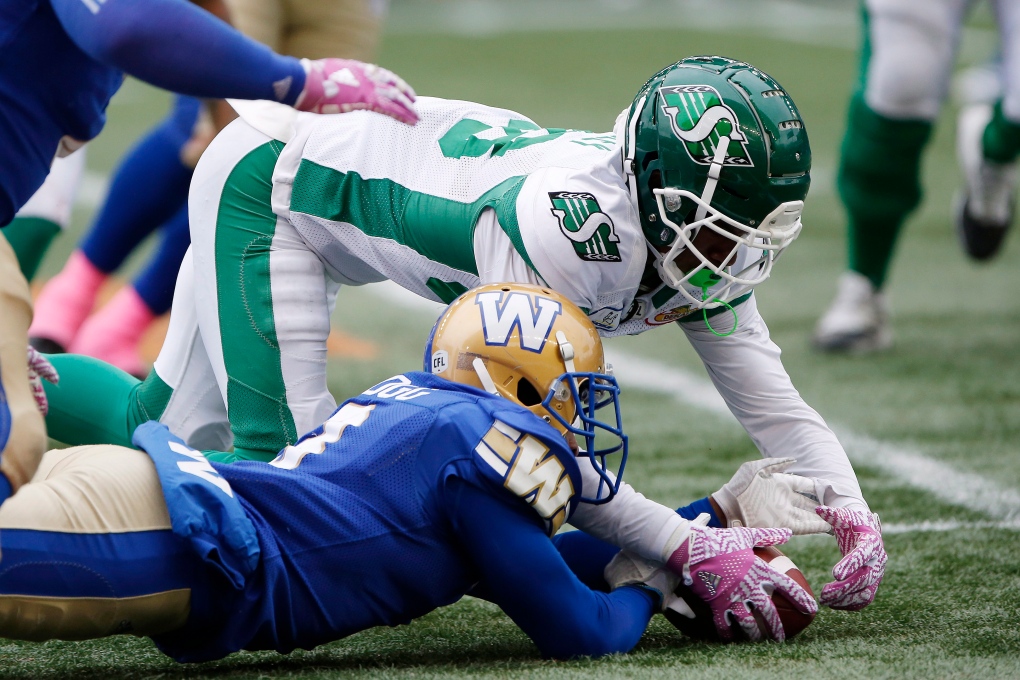 WINNIPEG -- Adam Bighill was signed by the Blue Bombers for his leadership and tenacious talents. He delivered big time on Saturday.

The veteran linebacker had three quarterback sacks, one forced fumble that led to a touchdown and eight defensive tackles in Winnipeg's 31-0 shutout of the Saskatchewan Roughriders.

"When you get a quarterback sack it feels good," said Bighill, a seven-year veteran who was the CFL's top defensive player in 2015 while with the B.C. Lions.

Winnipeg extended its winning streak to four games and improved to 9-7, remaining in third place in the tight CFL West Division standings.

"It's just a taste of reality. It happens," said Saskatchewan defensive lineman Charleston Hughes, who had two tackles, including one for a loss.

"We did get shut out. They pretty much dominated the whole entire game. Now you just really go back to the drawing board and figure out what happens."

The Bombers avoided a season-series sweep by the Riders (10-6), who had already secured a playoff spot. Saskatchewan, which had its three-game win streak halted, finished the game with four turnovers while Winnipeg had one.

"We've got to protect (Collaros)," Riders offensive lineman Brendon LaBatte said. "You can't let him get roughed up, especially early in the game.

"And we can't turn the ball over because I think no matter what else we focus on, that was the one thing that truly put the dagger in us."

Winnipeg led 14-0 after a first quarter in which Saskatchewan turned the ball over on its second and third possessions of the game.

A Collaros pass was caught by Kyran Moore, but Bighill forced a fumble and Anthony Gaitor caught the loose ball and ran 45 yards for the 7-0 lead at 5:22.

Darvin Adams made it 14-0 after he got behind Riders safety Mike Edem and hauled in a long bomb from quarterback Matt Nichols that he turned into a 72-yard catch-and-run score with two minutes left in the first quarter.

Loffler's second interception of the game -- his third pick of the season -- led to Justin Medlock's 29-yarder at 6:11 of the second quarter. Medlock was also good on four converts.

Weston Dressler stretched for a 31-yard TD pass from backup Chris Streveler, who also plunged in for his own major with less than a minute remaining the first half.

"I've been a part of games where our defence played good enough for a shutout, but maybe there was a single scored at some point," Nichols said.

"To have no points scored is an unbelievable effort by our defence. They've been playing unbelievable football and I would like to think we prepare them well all week at practice."

Saskatchewan head coach Chris Jones called it an "inexplicable loss" with too many early mistakes. He was asked if he was worried about Collaros's recent performances.

Saskatchewan offensive lineman Dariusz Bladek and defensive lineman Mic'heal Brooks were both taken out of the game on carts. Jones said they may be out for an extended time.

The Bombers will next have a bye week while the Riders play in Calgary next Saturday.