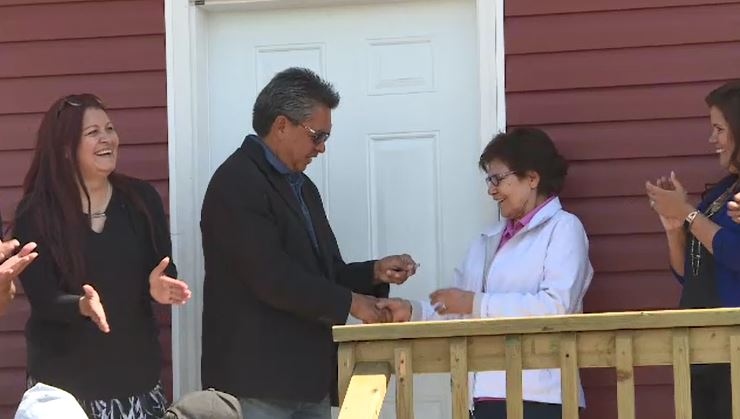 Gloria Pelley was given the keys to her new tiny house on Wednesday.

Gloria Pelley is an elder of Cote First Nation but this is the first time that she’s had a house on her own reserve.

She was given the keys on Wednesday.

“The feeling is just so incredible. I can't believe I'm the owner of this home, my first ever home. And I'm grateful,” she said.

A lack of housing is a big concern for Cote First Nation. There are too few houses for all of the band members and many are forced to live away from Cote, often in urban areas or with family members.

The band council hopes the new house will start to change that.

The house is just 32 square metres — enough room for one person. It also has green appliances and solar panels, which will make it more affordable for whomever lives here.

He said that the houses are “one step towards meeting our needs” and that the waiting list for a house was more than 200 people.

The house also fosters education. That’s because it was built by eight high school students.

The students were were enrolled in a program with Parkland College and learned carpentry, electrical and plumbing.

Emma Keshane is a senior in high school and was one of the builders. When she started the project the only carpentry knowledge she had was learned from TV. But she never missed a session of the six-month build and now she’s hoping for a carpentry career.

“After graduating I'm hoping to get a summer job and in the fall I’m going to Sask Polytech in Moose Jaw for Level One carpentry,” she said.

This is what the program was designed to do — help some band members come home and to help others to move on.

And construction isn’t over just because Pelley has the key. Another house will be built next year on Cote First Nation. It will provide more shelter and more skills.

“Now I can feel like I have job skills and a bunch of employability skills, stuff that will help me with my career and my life,” Keshane said.