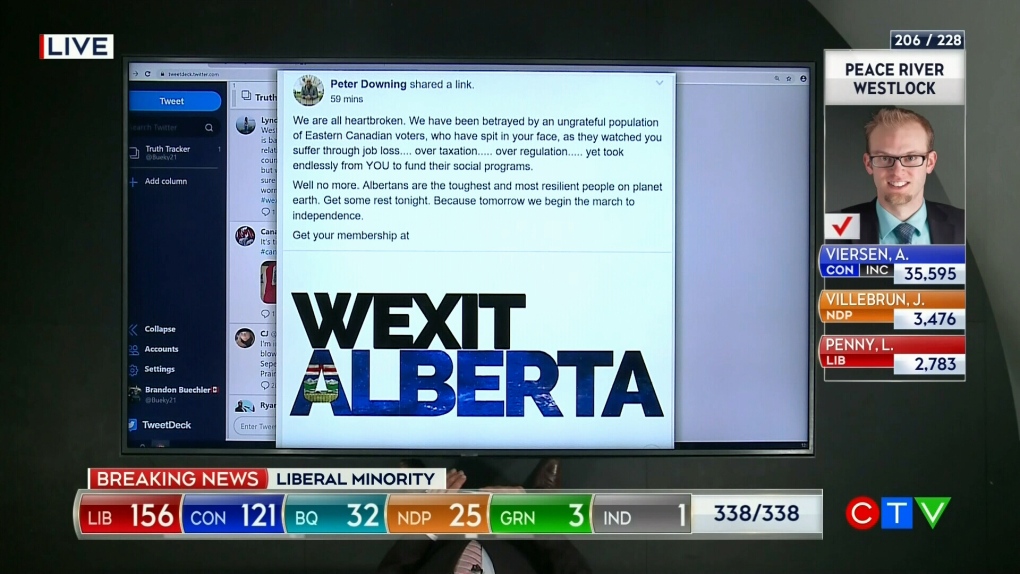 CALGARY -- Talk of western separation -- or Wexit, as some are calling it -- is percolating a day after voters returned the federal Liberals to power but with a minority government.

The Liberals managed to hang onto seats in Ontario, Quebec, Atlantic Canada and British Columbia, but Alberta and Saskatchewan are Conservative blue except for one NDP riding in Edmonton.

The VoteWexit Facebook page with its motto "The West Wants Out" has more than 142,000 members and counting.

And an online petition calling for a western alliance and Alberta to separate has been backed my nearly 26,000 people so far.

Grant Fagerheim, CEO of oil company Whitecap Resources Inc., says Alberta and Saskatchewan's contributions to the Canadian economy have not been respected.

He says he's not surprised there has been talk of western separatism, but whether that amounts to anything is another matter.

"I don't believe at this particular time, whether you live in Saskatchewan or Alberta, that people would say they're Canadian first at this time."

Fagerheim said historically he's been a federalist, but "I can't say I'm a proud Canadian at this particular time."

This report by The Canadian Press was first published Oct. 22, 2019.