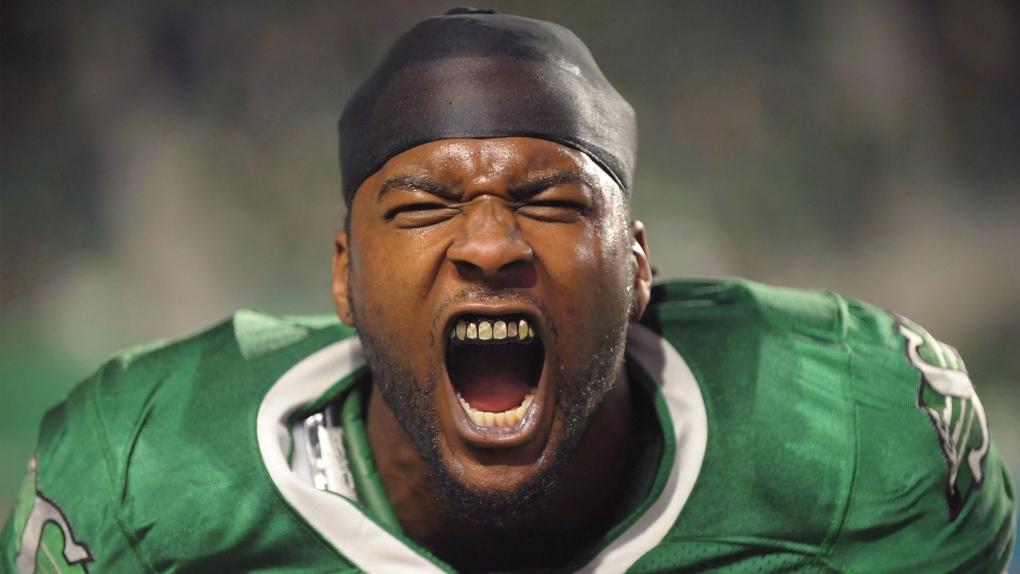 Saskatchewan Roughriders running back Jerome Messam celebrates a season opener victory against the Toronto Argonauts at Mosaic Stadium in Regina on Friday, June 15, 2018. Defensive end Charleston Hughes and running back Messam get to face their former team Saturday night when the Saskatchewan Roughriders take on the unbeaten Calgary Stampeders. THE CANADIAN PRESS/Mark Taylor

Canadian running back Jerome Messam's second stint with the Saskatchewan Roughriders has come to an abrupt end.

The Riders announced via twitter Monday they've released the veteran running back "after he has been criminally charged following an incident in November, 2016."

No further details were provided, but according to a tweet by the Canadian Football League, Messam has been charged with Voyeurism, which is a criminal code offence.

According to the CFL, Commissioner Randy Ambrosie has announced that the league will not register a contract with Messam if any other team attempts to sign him.

According to a report from TSN, Messam is accused of videotaping a consensual sexual encounter with a victim without the person’s consent while he was a Calgary Stampeder in 2016.

The victim came forward to Calgary police in April 2018 after being told that Messam had the tape.

Police say the tape has not been posted anywhere.

Under the Criminal Code, voyeurism is when someone "surreptitiously, observes -- including by mechanical or electronic means -- or makes a visual recording of a person who is in circumstances that give rise to a reasonable expectation of privacy."

The Criminal Code also covers distributing recordings from such offences.

Punishment is up to five years in prison.

“I hope that very soon I will be found not guilty of this accusation and that I will be able to continue my playing career. I appreciate all of the people that have stood by me and are supporting me right now," said Messam in a statement to TSN. "To the fans, I hope that you will remember how hard I worked on the field and the difference I tried to make in my community in every city I've played in.”

Messam rejoined the Riders as a free agent this off-season after spending parts of three campaigns with the Calgary Stampeders (2015-17). Messam was with the Alberta club at the time of alleged incident and registered consecutive 1,000-yard rushing campaigns (1,198 yards in 2016, 1,016 in 2017) before returning to Saskatchewan.

With files from TSN.ca