There are three new cases in the north, including two in Lloydminster. There also two new cases in Saskatoon and one in La Loche.

Premier Moe said the province is continuing to monitor outbreak situations in La Loche and Lloydminster.

“We’re doing some aggressive testing and contact tracing in each of those communities so that we may be able to identify everyone who has contracted COVID-19 to have them self-isolate and then tell anyone that they have come in contact with as well,” said Moe.

“We have very few active cases currently in most of the far north, north central, part of Saskatchewan including Saskatoon, and South including Regina,” said Dr. Saqib Shahab.

With the government ramping up testing in communities with active virus clusters, Shahab said the province could see higher active cases in the coming weeks.

“In terms of the clusters again, we need to understand that with active case findings we will continue to see more cases,” said Shahab. “[Tests] may pick up cases with mild or no illness, so that is to be expected. 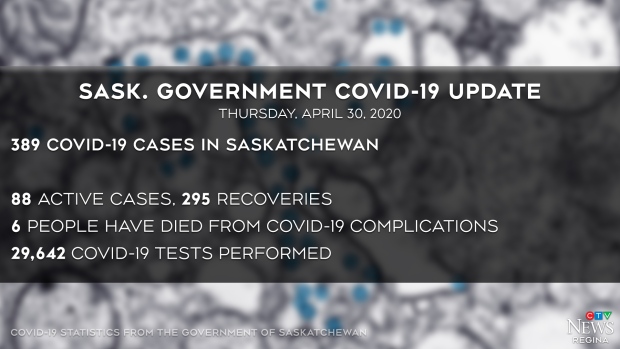 There are 10 people in hospital in Saskatchewan. Seven people — four in Lloydminster and three in Saskatoon — are receiving acute care. There are also three people in the ICU in Saskatoon.

On Wednesday, health officials announced an outbreak at Lloydminster Hospital.

The far north has the most active cases at 50. The south region has no active cases and hasn’t announced a new case since the first week of April.

There are 137 cases linked to travel, 159 from community transmission or mass gatherings, 36 with no known exposure and 57 still under investigation.

A total of 39 health-care workers have tested positive for the virus, but the province says not all cases are linked to working in the health-care field.

There have been a total of six deaths in Saskatchewan related to COVID-19.

The province is reminding people to take precautions if they’re forming a virtual household. The households should remain consistent and shouldn’t include anyone with underlying health conditions.