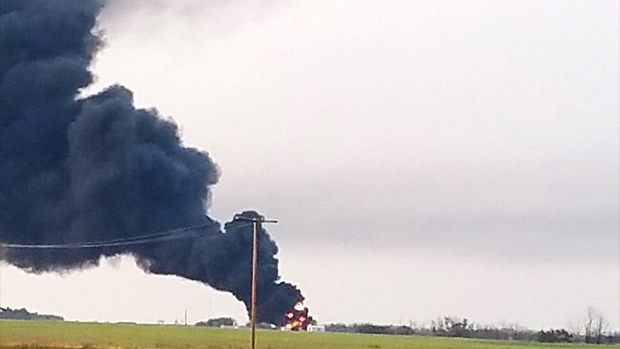 An oil tanker burns in a field near Stoughton after a lightning strike on Aug. 15, 2017 (Twitter: Cheryl Lake)

Three oil tanks near Stoughton went up in flames on Tuesday night after a lightning strike.

Stoughton Fire Chief Pat Slater told CTV News that fire crews were called to a fire about 10 kilometres south of Stoughton around 5:45 p.m. He said three storage units were ablaze and one had clearly been struck by lightning. Slater said the tank was “split wide open” with the “top blown off.” There were also some bad storms in the area on Tuesday evening.

Slater said fires like this are common and he’s seen many fires like this one. He added that many oil facilities are made of tall, metal pipes sticking up in the air in the middle of empty fields and they make perfect lightning rods.

The fire was still burning on Wednesday morning because the blaze was too intense to fight on Tuesday night. Slater said the blaze should be out by Wednesday afternoon.