REGINA -- The labour dispute between Federated Co-operatives Limited and Unifor 594 is having a ripple effect on the city, and an Economics Professor at the University of Regina says it's not good for the economy.

“Some establishments are going to gain, some are going to lose, and establishing that net effect is really hard. In my opinion, it's unlikely that it's overall positive,” University of Regina Economics Professor Jason Childs said.

Childs says National Unifor workers may be bringing in some money, but picketers and truckers aren't spending as much as normal. Childs says the average refinery worker is losing about 66.4 per cent of their weekly pay, meaning someone who averages $1,340 a week is losing $850 every seven days.

Restaurants and hotels have been benefiting from an increase in people, Victoria's Tavern has been busier than usual. General Manager Chantelle Kraushaar says the restaurant is still seeing the same regulars, but also a new group of people.

“There’s definitely an influx of people in town obviously with the hotels around us, we see a lot of people,” Kraushaar said. “A lot of regulars too with the nationals from Unifor coming in and things like that. So we've definitely picked up in business.”

A person CTV News spoke to, with family on the picket line, says local grocer Body Fuel Organics is struggling.

According to the store, sales are down 31 per cent compared to this time last year. Store owner Lana Van Dijk says the only difference from 2019 is the dispute in the city, and feels the families involved could be cutting back on certain groceries.

“When you’re trying to cut your grocery budget down to the bare bones, or you’re eating out of your freezers and trying not to go to the grocery store at all, maybe the organic is the first to go,” Body Fuel Organics Owner Lana Van Dijk said.

The Regina Police Service is tracking how much it has spent on additional resources during the dispute, but won't release those numbers until it's over.

Childs says with a poor harvest last year and weak potash prices, Saskatchewan’s economy has been slowing down, and the dispute is not helping. 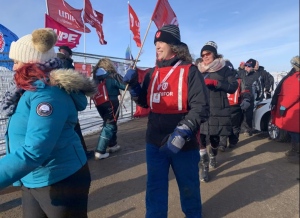