Since day 1: Looking back at 1 year of COVID-19 in Saskatchewan

REGINA -- Friday marks one year since Saskatchewan reported its first case of COVID-19.

A person in their 60s who had travelled to Egypt was the first presumptive case in the province.

Since then, Saskatchewan has endured several spikes in cases, deadly outbreaks in long-term care and a quiet Christmas.

The arrival of the COVID-19 vaccine in December paved the way for optimism for some, and skepticism for others.

Here’s a look back at the past year of pandemic storylines in Saskatchewan:

A total of 401 Saskatchewan residents have died after testing positive for the disease.

Saskatoon and Regina have both led the province in active COVID-19 cases at different points over the past year. The Saskatoon zone leads the province with 7,675 total cases, with the Regina zone in second with 6,050.

Since Dec. 15, 95,879 doses of the vaccine have been administered throughout Saskatchewan.

ARRIVAL OF THE VACCINE

On Dec. 15, two Saskatchewan health care workers became the first people in the province to receive the COVID-19 vaccine.

The immunization of 1,950 Regina health care workers began that evening, as part of the province Vaccine Delivery Plan. The ‘pilot’ portions of the plan was the first in a series of steps to deliver the vaccine to the general public.

The first COVID-19 vaccines have arrived in Saskatchewan. Today at 6:00 PM, health care workers are set to receive the first shots.

This is great news, Saskatchewan! pic.twitter.com/idUhOlsvFH

In mid February the province had announced its plan to open 230 vaccine clinics in more than 180 communities across the province.

The province opened its online and telephone booking system for vaccination appointments, on Mar. 11.

Care facilities in Saskatchewan were relatively unscathed during the first wave of the pandemic, however, the second wave hit homes with blunt force. Out of the 117 COVID-19 deaths in care homes, 108 happened between Dec. 1 and Feb. 4.

According to the Ministry of Health, as of Feb. 3, 117 people have died of COVID-19 in Saskatchewan special care homes (also referred to as long-term care homes) and personal care homes since the beginning of the pandemic.

Regina's Extendicare Parkside was one of the hardest hit homes. 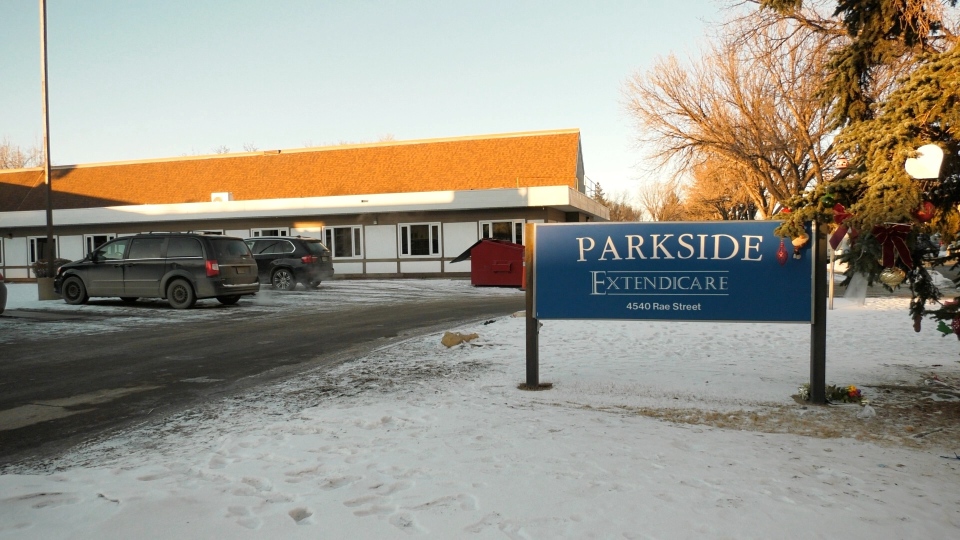 An outbreak was declared at Parkside on Nov. 20. By Dec. 1, the home said 50 residents had tested positive for the virus.

The SHA confirmed 41 peopled had died due to COVID-19 at the care home since the outbreak was first declared. More than 200 residents and staff tested positive for COVID-19 in that time.

As a result of the deadly few months at the care home, the Government of Saskatchewan requested the Provincial Ombudsman investigate the outbreak.

According to Extendicare, out of the 41 deaths associated with the Extendicare Parkside outbreak, 38 deaths occurred at the Parkside facility and three residents who tested positive after being transferred to Pioneer Village also died.

COVID-19 spread quickly as Saskatchewan headed towards the end of 2020.

Through the first seven months of the pandemic, Saskatchewan recorded 25 total deaths relating to COVID-19. However in November, the province doubled that total, reaching 51 deaths by the end of the month.

Active cases rose from 798 at the start of November to 3,819 by Dec. 1. Hospitalizations more-than tripled, rising from 33 to 121 in that same period.

Following Saskatchewan's provincial election at the end of October, the government enacted new measures aimed at curbing transmission of COVID-19.

A mandatory mask order for indoor public spaces was put into place in Saskatoon, Regina and Prince Albert on Nov. 6. Indoor gatherings were also capped at a maximum of 10 people.

The mask mandate was extended on Nov. 16, to include all Saskatchewan communities with a population over 5,000.

The government then doubled down by the end of the week, making masks mandatory in all indoor public spaces province-wide and lowering the indoor private gathering limit to a maximum of five people. 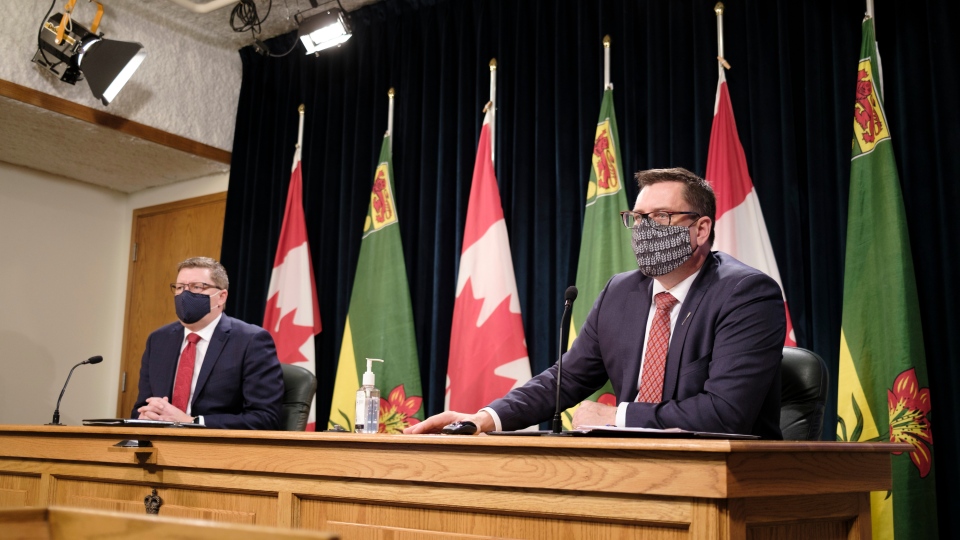 As cases continued to rise, team sports and activities were shut down on Nov. 27. The new restrictions put an indefinite pause on the SJHL season and other youth sports across the province.

The Saskatchewan Health Authority also heightened its COVID-19 response at the end of the month, with ICU capacity nearing 100 per cent.

Health authority officials said it would be adding additional staff to help people being hospitalized for COVID-19 and for contact tracing and testing.

The move comes after the SHA reported a five-fold growth in COVID-19 cases in ICUs over the past thirty days, leading up to Nov. 26, causing capacity to reach nearly 100 per cent.

"For us to truly be effective in bending the curve, lowering the spread of COVID-19, we actually need to pay attention to what the health orders are and follow them in our daily routines," Moe said.

The province topped its single-day case record five times during the month. At the time, all of the top 10 highest single day case increase happening over the last 30 days.

It has taken four months for COVID-19 to slow down across the province, following the spike in November. As of Mar. 9, the province reported 1,414 active cases: the lowest active case total since Nov. 11.

Saskatchewan's death toll continues to rise, having added more than 375 deaths since the beginning of November.

To end 2020, it appeared restrictions would continue to be a part of life for residents as the province headed into the holiday season.

A DIFFERENT KIND OF CHRISTMAS

With case numbers still high across Saskatchewan, the province introduced strict restrictions around gathering sizes the week before Christmas.

On Dec. 14, the province announced indoor gatherings would be restricted to members of immediate households.

Single-person households were allowed to meet with one household for a total of five people or fewer. Co-parenting arrangements, caregivers and support services in the home were permitted to continue. Public, outdoor gatherings could not exceed 10 participants.

Premier Scott Moe said in a news conference at the time that due to the spread of COVID-19, this year would see a “different kind of Christmas."

“I know this is going to be very challenging for many of us” Moe said. “It needs to be a quieter Christmas. Lets take advantage of the quiet time ahead of us.”

Moe suggested spending time with one's immediate household, working from home and enjoying community outdoor activities as ways to pass the time over the holidays.

These restrictions came into effect on Dec. 17 and were originally set to last until Jan. 15.

By March, these gathering restrictions were still in place.

In addition to gatherings size restrictions, retail locations were ordered to reduce their capacity by 50 per cent, as of Christmas Day. Large stores were required to limit capacity to 25 per cent.

“Our government takes this decision extremely seriously,” Moe said. “We know there are risks on both sides. If we move too quickly, we risk increasing the spread of COVID-19. If we move too slowly, we risk permanent damage to the livelihoods of thousands of Saskatchewan people,” Moe said, during his address.

The next day, Moe and Dr. Saqib Shahab, the province’s Chief Medical Health Officer, outlined the five-phase plan, set to begin on May 4.

The first phase, brought back some medical services along with some low-risk recreational activities.

The subsequent phases of the plan proceeded in Saskatchewan throughout the spring and early summer.

Speaking on September 2, Moe said the province is not currently considering moving into Phase Five of the Reopen Saskatchewan Plan any time soon.

“There has been some of those discussions specific to different venues, different events, but as far as moving into an, essentially a mass level five, 'lets have large events again,' there is no discussion about that at this point in time,” Moe said.

SPIKE IN THE SOUTH

After a couple months of very few isolated outbreaks throughout Saskatchewan, the province saw its second spike in cases as transmission of the virus rose in the south and central regions.

A COVID-19 outbreak was declared on two Hutterite Colonies in the R.M. of Maple Creek on June 17.

Two cases were initially identified, and another 14 were confirmed the day of the alert. The SHA said the cases were linked to interprovincial travel to Alberta, as well as in the area.

Local health officials began a large investigation throughout the southwest, conducting contact tracing and testing on several colonies in Alberta and Saskatchewan.

The government did not impose restrictions in these areas, but worked with local leadership to develop self imposed guidelines.

“Those powers are there and they will be used if it is required in certain areas of the province,” Moe said. “In saying that, it is always better to work with the local leaders on how we can contain this spread.”

While communities throughout south Saskatchewan continued to deal with higher case numbers throughout the end of June, cases began to spike in mid-July.

The province attributed a surge of 56 COVID-19 cases reported over the weekend of July 11-12, to previously reported cases that had then spread throughout the south west and west central areas of the province.

The SHA implemented increased contact tracing and testing in the affected areas.

“We’d all hoped that we were through the most difficult phase of COVID-19, and with everything reopening, no one wants to take a step back, but there is now increased risk in south west and west central Saskatchewan,” Warren Kaeding, the Minister of Rural and Remote Health, said in a press conference on July 16.

The following week, the government warned of increased transmission risk in several areas in south west and west central Saskatchewan.

Signs are seen in the front window of Great West Auto Electric (Bumper to Bumper) in Swift Current. Many businesses in the city are taking extra precautions after multiple people who tested positive for COVID-19 visited various businesses. (Stefanie Davis/CTV News)

The province saw its highest single day rise in cases, adding 60 new cases on July 22, with 50 of those in the south region.

Saskatchewan hit its record high for active cases on July 29, reaching 322. A total of 143 of those active cases were from the south region.

Since that peak, cases began to decline in the province as recovery numbers began to accumulate.

Cases remained on some Hutterite colonies, however, in a tweet on August 16, Moe said the efforts to curb the virus among Hutterites were working, and there was reason for optimism.

As of September 11, the province said 19 active cases were found in communal living settings. Case numbers have returned to average in the south region, currently accounting for nine total active cases.

The province declared an outbreak in La Loche on April 17, as the community saw some of the highest rises in cases Saskatchewan had seen at that point.

At its peak on May 10, the far north region accounted for 156 active cases; just under 75 per cent of the province’s active cases at the time.

Public Health restricted travel to the region on April 24 and implemented further measures one week later on April 30.

By mid-May, cases began to fall in some areas of the far north region and the province relaxed restrictions for some communities.

With files from Janelle Blakley, Marc Smith and Katherine Hill